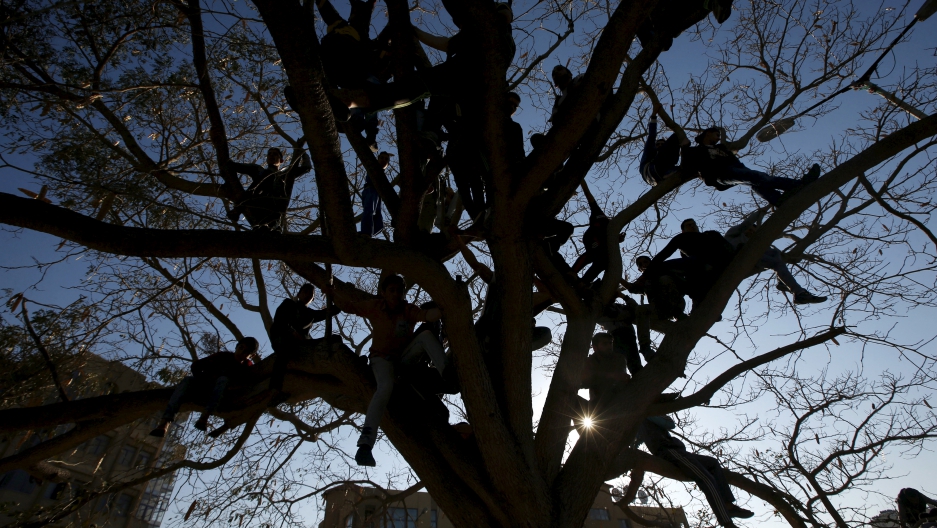 Palestinians climb over a tree as they watch a cultural carnival in Gaza City April 1, 2016.

The tree of life is a key way scientists classify and think about the diversity of life on Earth, a kind of visual taxonomy for how organisms are related to each other and evolve over time, branching in new directions from a common root.

Humans tend to think of themselves as a pretty important branch on that tree. Certainly we think of animals and plants as being the most dominant and abundant forms of life. But a new model proposed for this map shows animals, plants, fungi, algae — just about every living thing we can see — make up an even tinier portion of Earth’s biodiversity than scientists previously thought.

University of Waterloo microbiologist Laura Hug and collaborators in the US and Japan built their new tree of life with genetic data from public databases and more than 1,000 newly reconstructed genomes.

Their model, published Monday in the journal Nature Microbiology, allowed them to include primitive but widely divergent single-celled organisms that haven’t been grown or cultivated in labs before.

“What that’s letting us do is look at a much broader range of environments in much greater depth, and that’s leading to discoveries of hundreds and thousands of new organisms on the tree of life,” Hug said.

You can think of the tree as having three main branches: bacteria (single-cell organisms without a nucleus); archaea (more complex single-celled organisms); and eukarya, a relatively small branch of single- or multi-celled organisms with nuclei and other specialized hardware that together includes fungi, plants, the protists you might remember from high school biology, and animals, from mosquitos to humans.

In the past, before genetic sequencing was comparatively cheap and easy, the known tree of life captured little of the bacteria and archaea branches. Scientists based their biodiversity map on the physical characteristics of creatures they could see and microorganisms that could be grown in labs. Some versions of the tree of life focused almost exclusively on eukarya, relegating all other forms of life to mere footnotes.

“Now, with genome sequencing so common, we’re able to look at a much wider diversity of organisms,” Hug said, “and so the differences in the tree are that there’s many more organisms on it compared to 30 years ago.” 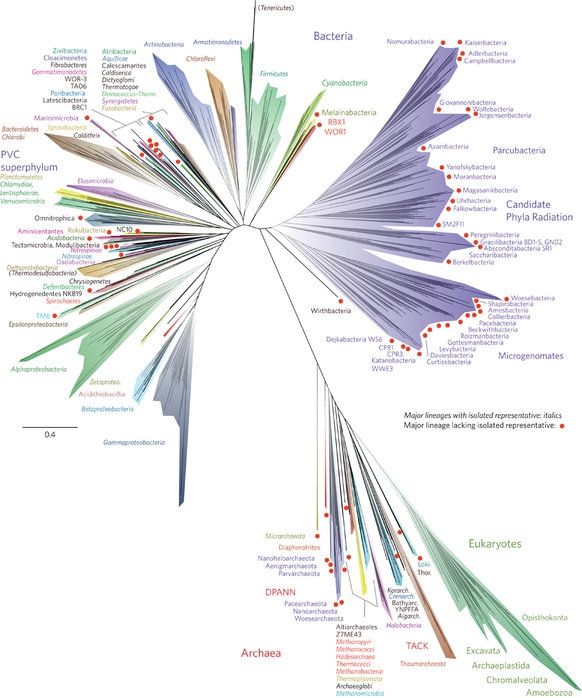 Check out the full figures.

The newly identified and classified organisms are all single-celled bacteria and archaea, so the branch that contains complex, multi-cellular life like us is shrinking in comparison.

Hug and her colleagues say that bacteria make up most of the genetic diversity of all life on Earth.

“Within the bacteria... those branches are each more different from each other than we are from worms,” Hug said. “They’re closer to the difference between us and a mushroom.”

Part of the goal of expanding the tree of life with a new model, Hug said, is to document the invisible diversity of live on Earth so that we have a better understanding of what we stand to lose as humans bring dramatic changes to just about every corner of the earth.

“It’s a big unknown, what would happen if we lose a lot of the diversity within these microbial lineages,” Hug said.

Microscopic organisms do everything from keeping our gut biome in check to absorbing nitrogen in the atmosphere for plants to use.