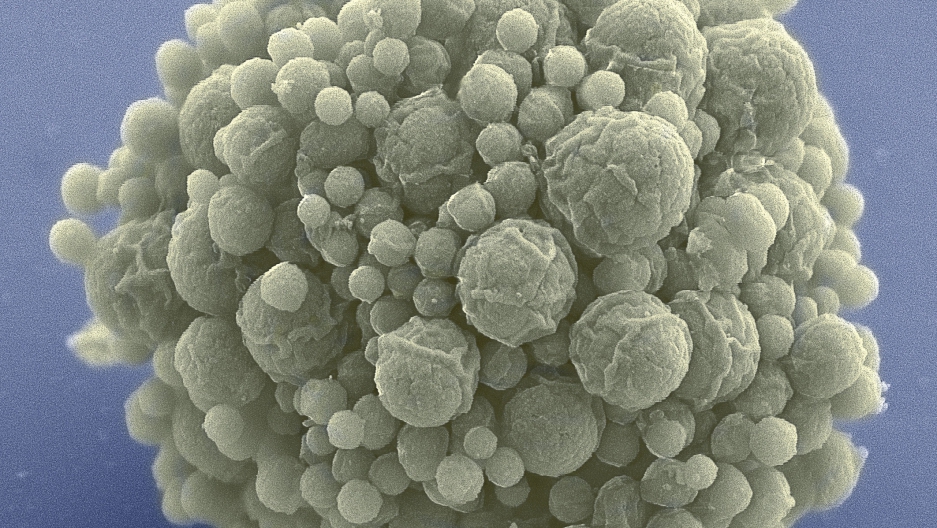 Electron micrographs of clusters of JCVI-Syn 3.0 cells magnified about 15,000 times.

Biologist Craig Venter and his team just announced that, after years of failure, they have finally figured out the minimum number of genes necessary to create a living, stripped-down version of a cell.

Venter, who is founder of both the J. Craig Venter Institute and Synthetic Genomics Inc., has been working to create a version of the bacterium Mycoplasma mycoides with only the bare minimum of genetic instructions required for life. As it turns out, he says, at least 473 genes are essential to sustain life in a lab.

“Essential is a context-specific question,” Venter says. “So the number would not be an essential number for humans or even an essential number for surviving in the wild. But surviving in our laboratory conditions with well-grown things, that number comes out at only 473 genes. But I think the biggest surprise is 149 of those are of complete unknown function. And this is a very different view of life than we've had for the last 20 years.”

For context, the human genome is believed to contain between 20,000 and 25,000 genes. And the fact that no one knows the function of 149 genes necessary for life means scientists actually know a lot less about biological life than they thought they did.

“The scientific community has been basically suffering from the delusion that we did know all of the biology,” Venter says. “The fact that we've been missing a third or so is exciting because we can now move and try to understand it. ... One of the ironies of science is you can only study the known world. Our entire view is based on what we know currently as reality. Well, it turns out we are missing about a third of reality in terms of biology. So that’s probably the most important finding and it's frustrating, it's humbling, it's exciting, it's all the above.”

Venter says the process of figuring out the genes essential to life was a long and difficult one. He compares it to being an alien coming to Earth and trying to figure out the parts necessary to fly a Boeing 737.

“[Imagine] if you were new to this planet and you were looking at a 737, and you were trying to work out its function by pulling parts off,” Venter says. “And you found these pod-like things hanging off the wings and you remove the one from the right wing. You would find that the airplane could still fly and land. You'd say, ‘Obviously that part is not necessary for airplane flight.’ And so if you then applied that rule and you say, ‘Well, there is one on the other wing as well. We can obviously dispense with that.’ And you throw that out and all of a sudden the airplane crashes. So that's what happens in biology is we have pairs ... that either have similar functions or coexisting functions that you have to have both parts there. And it turns out 32 percent of these parts are unknown.”

Venter says the next step in his work includes studying and defining the function of the 32 percent of unknown genes he’s discovered. Eventually, he hopes his work will have much wider implications for bettering our understanding of the biology of life.

“This is the first time somebody to my knowledge has attempted to actually design a species in the computer and then bring it to life,” Venter says. “It tells us about the fundamentals of biology ... really trying to get down to the essence of life, to define it and, in this complex genomic software fashion, it tells us maybe more about how they came together. It certainly tells us that we need to look at life in a genome-centric view, versus what's been done for a long time of a gene-centric view. We can't just look at a function of a gene, we have to look at it in the context of a whole.”