Hiroshima survivor Noriho Azuma (wearing a hat) in front of the A-bomb dome in June of 2015.

John Kerry’s visit to Hiroshima begs this question: Do Hiroshima’s survivors and their families want an apology from the United States?

Here’s the answer: Sure they do. An apology wouldn’t bring back the family, friends, neighbors and teachers they lost (nearly all those still alive today were children in 1945). It wouldn’t bring back their city, leveled but for a few ruins. But it would provide a small dose of comfort in their waning years.

There’s something else that survivors of the A-bomb want more than an apology — much more. They want history to never repeat itself. They want the world to agree to no more Hiroshimas. If the visit by Secretary of State Kerry — and perhaps a future visit by President Barack Obama — can help secure that, that would be more meaningful than a formal American apology.

(To illustrate how sensitive this, the Japanese foreign ministry has drawn criticism for its translation of the G7 foreign ministers' April 11 statement on Hiroshima and Nagasaki. The official Japanese version translates the phrase  "human suffering" as hiningenteki na kunan, which according to the Japan Times means "inhumane suffering" or "humanitarian consequences.")

Of course, the survivors, or hibakusha, of Hiroshima and Nagasaki are not a monolithic group.

Attitudes toward the United States range from hatred to forgiveness to indifference. That’s one of the first things you discover when you talk with survivors, which I did in 2005 and in 2015.

More: A young tour guide, a Hiroshima survivor and a baton passed

Hibakusha Noriho Azuma told me last year that he didn’t blame the United States for dropping the bomb.

“I think if the Americans hadn’t dropped the bomb it might have been even crueler,” he said. “The Japanese government was calling on everyone to fight — even women and children — if the Americans invaded. To fight with homemade bamboo swords! Can you imagine?” 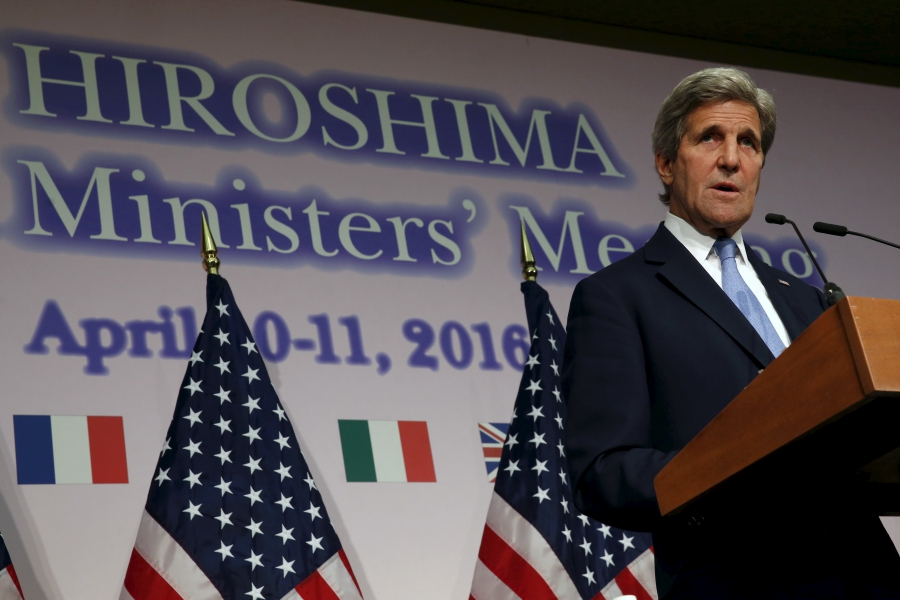 U. Secretary of State John Kerry holds a news conference at the conclusion of the G7 foreign ministers meetings in Hiroshima, Japan, April 11, 2016.

Not that Azuma had it easy. Far from it.

“It would have been much better if I had died back then,” he said. “Life has been hard. My friends all died young.”

There is among many survivors a death wish: a desire to have been killed either by the blast or by radiation sickness that followed. Harvard psychiatrist Robert Jay Lifton noted this after studying scores of hibakusha. Along with their death wish is what he calls a survivor mission.

“There's a constant preoccupation now about their own old age and death and the loss of direct witnesses,” Lifton told me in 2005. “The survivors themselves, the people who were there, have a kind of maximum authority. In a way, psychologically, they're closest to the dead and they speak for the dead. They sense this and they fear that the message will be lost."

Related: After the A-bomb survivors die, who will be Hiroshima's memory keepers?

Sueko Hada delivers that message every time she gets up on a stage. Her entire family — parents, four sisters — were wiped out by the blast. All except for her, age 7.

I first met Hada in 2005 when she went into excruciating detail about the moment the bomb exploded and the hours and days after.  I met up with her again last year when she told me about the public speaking she’d started doing, fulfilling her survivor mission. She’d spoken to audiences both in Japan and the United States.

“Americans listened intently to what I had to say.” she said. “One time, a young person approached me, saying ‘I’m sorry,’ and gave me a hug. I was very moved.”

Hada also related a strange turn of events in her family history. She now has American in-laws: Her granddaughter married an American Marine and is now raising her two children in Colorado.

“At first, I thought, ‘Why does it have to be an American guy?”’ said Hada. Her own now-deceased husband, a pilot in the Japanese military during World War II, had hated the Americans.

But she got used to the idea. She now advises her granddaughter, Yuko, by Skype on how to broach the still-sensitive subject of the family’s Hiroshima history with Yuko’s friends and neighbors in Colorado.

As Yuko told me, she’s not looking for apologies from Americans. She just wants people to talk freely about what happened, and why it should never happen again.

See also: What if your hometown were hit by the Hiroshima atomic bomb?