2015 was a big year for climate news — but you wouldn’t know it from watching network TV news in the US.

Despite such major stories as President Barack Obama’s Clean Power Plan, the Paris climate agreement and the Pope’s encyclical on climate change, on average NBC, CBS and ABC all devoted fewer minutes of coverage to global warming, according to Media Matters for America, which has been monitoring climate coverage since 2009.

The total amount of coverage on the nightly news and the Sunday talk shows dropped five percent in 2015, says Andrew Seifter, climate and energy program director for Media Matters and a co-author of the study. This is surprising, Seifter says, given that “by any measure, we could say that 2015 was the most newsworthy year for climate change in history.” 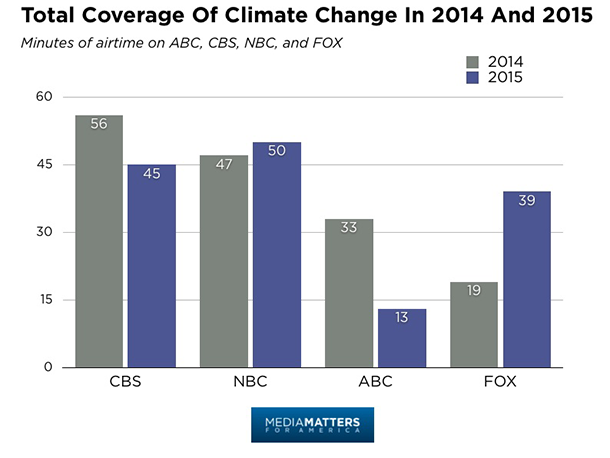 Total coverage of climate change in 2014 and 2015, based on minutes of airtime on major news networks ABC, CBS, NBC, and FOX.

ABC, in particular, stood out. The network showed a 59 percent drop in their coverage, dedicating just 13 total minutes to climate change coverage in all of 2015.

FOX was the one network that significantly increased its coverage. It actually doubled it, Seifter says. But that wasn't necessarily a good thing for people concerned about climate change, he notes. “The vast majority of that coverage included attacks on climate policies, or climate science denial,” he explains. “So, people who watch Fox for their climate coverage got more of it, but they didn't necessarily learn more from watching it.”

NBC and CBS’s coverage stayed about the same as the year before, but both networks did a better job “connecting the dots between extreme weather events and climate change,” Seifter believes. “That was one particular area where those two networks did an excellent job.”

PBS stood out in terms of the quality of its coverage, according to Seifter. The network had more segments on climate change than all of the other nightly news shows combined.

Because climate change is a “gradual menace,” it just “doesn't have the same shock value as a terrorist attack or a mass shooting — the types of events that draw massive waves of media coverage,” he explains. “Climate change requires journalists to dig a little deeper and to explain the nature of the threat to their viewers."

While polling consistently shows the vast majority of the public believes climate change is real, that humans are causing it and that the public supports actions to address it, polls also indicate that people don't prioritize climate change compared to other issues, Seifter says. He blames this on the nature of the news coverage.

“The media is not talking about the impacts of climate change on a day-to-day basis,” he says. “We found in our study that the national security impacts of climate change were largely ignored by the networks; the economic impacts were largely ignored and the public health impacts, as well, even though the Obama administration specifically made it a point to emphasize public health when they rolled out the Clean Power Plan.”

One might think that the huge changes in the media landscape, particularly the rise of internet news and social media, would lessen the importance of network news coverage. Seifter believes otherwise.

“The Sunday shows have a particular influence on the conversation that occurs in Washington and throughout the country,” he says. “They really set the policy agenda for the week and those conversations make news.”

The lack of daily coverage, along with the spread of climate change denial on outlets like Fox, has a cost to American society, Seifter believes.

“The public needs to know that climate change is already impacting their lives in significant ways and that it will continue to impact their lives and the lives of their children and grandchildren,” he insists. “I think it's really the obligation of the media to tell that story and inform the public about these threats.”