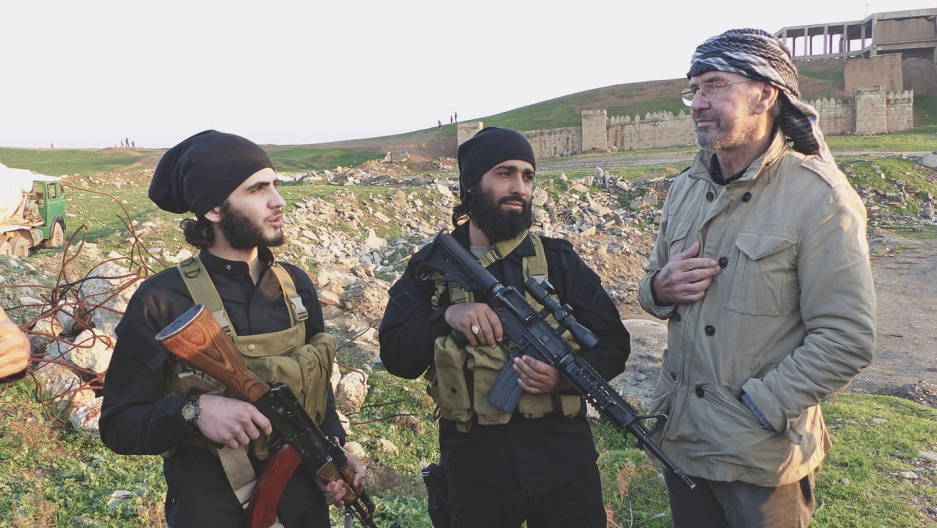 Few individuals have gotten close enough to the self-proclaimed Islamic State. Jurgen Todenhofer is one of them. He embedded with ISIS for 10 days in December of 2014.

Few individuals have gotten close to the self-proclaimed Islamic State and lived to tell about it. Journalist and author Jürgen Todenhöfer is one of them.

“I lived with them. Sometimes we slept on the same floor — there was just a Kalashnikov between us,” he says.

Todenhöfer embedded with ISIS for 10 days in December of 2014. He got access to the Islamic State after months of Skype negotiations and a public guarantee from ISIS leadership that he would return alive. He’s telling his story in a new book, "My Journey Into the Heart of Terror: Ten Days in the Islamic State," which is out on April 12.

“The reason why I believed in this guarantee was [that] ISIS wants to be seen as a state,” Tondenhöfer says. “They gave the guarantee as a state, and it would be a defeat for them if everyone would say, ‘They think that they are a state, and they give a public promise, and they don’t stick to that promise.’ And therefore I thought I would come back alive.”

Tondenhöfer spent most of his time with ISIS in Mosul, Iraq, but he also visited the Syrian cities of Raqqa and Deir ez-Zor. Tondenhöfer said he set the agenda with the Islamic State.

Though Thondenhöfer saw the people under ISIS rule obey the militants, he says that many did it reluctantly.

“I had the opportunity to speak in the streets, and sometimes somebody gave me a sign,” he says. “The ISIS fighters said, ‘You know, the economy is working and running,’ and with his hand, the guy who was beside me gave me a sign that he didn’t share this opinion. So people are not crazy — they would not say with a loud voice, ‘ISIS is terrorism,’ because they would be killed. So they tolerate ISIS.”

While he was able to safely travel around ISIS territory, Todenhöfer saw the brutality of the Islamic State. He said there was no trace of any Shia Muslims, because ISIS had already “eliminated” them from the area.

“There were no more Shias, no more Christians,” he says. “The Christians had left — they had the opportunity to stay, but they didn’t want to live under the dictatorship of terrorists, so there were only Sunnis.”

But Todenhöfer believes that things are changing as the people living under Islamic State control become more restless.

“Now they are very angry,” he says. “There is an opportunity now to make something with the Sunnis of Mosul, Ramadi, etcetera. There could even be a revolution against ISIS.”

There have been several reports that the Islamic State has enslaved women and girls and established an industry of rape. Though Todenhöfer did not witness this horrific sexual violence first hand, he says that ISIS fighters don’t shy away from the subject.

“They admit that they have introduced slavery,” he says. “I had long discussions about slavery because it’s a shame that a terrorist organization thinks that they are modern if they introduce slavery. But they told me, ‘You know, we have slavery officially — you have it secretly.’ But nevertheless, I think it’s horrible what they do, especially with the Yazidi girls. It’s just horrible.”

Todenhöfer says the fighters he met are nothing like the religious crusaders they claim to be. Rather, they’re more like a band of well armed criminals who love money, women and power.

“As far as Islam and the Koran are concerned, they’re illiterates — they have no idea,” he says. “I discussed the Koran with them — I’ve read the Koran three times, but I’m a Christian. They know certain parts of the Koran that are dealing with the war with Mecca and Medina. I confronted them with other parts, talking about justice, about mercy and they just didn’t know anything. Nevertheless, I would say that they think they are believers.”

While the fighters on the ground claim to believe in Islam, Todenhöfer doubts that the leaders of the Islamic State do.

“They are power guys — very, very tough power guys,” he says. “But they’re not really Muslims.”

The global community has been trying to find a solution to the bloody Syrian Civil War, and some have suggested that the Islamic State must be involved in negotiations. But Todenhöfer dismisses that notion.

“I am a friend of negotiations, but not with these terrorists,” he says. “They think that they will be part of negotiations — they told me and it was told to them by their leadership, that one day there will be negotiations. But I told them, ‘Nobody will talk to you.’ We have to defeat them and eliminate them. But I think our strategy to bombard cities is not the right strategy.”

Todenhöfer says the West must stop ISIS from obtaining weapons — he saw ISIS fighters with German machine guns that were given to Kurdish fighters. Additionally, Todenhöfer argues that the border between Turkey and the Syrian territory held by ISIS must be sealed.

“It was too easy to cross this border,” he says. “I had to run, and it was difficult to run, but nevertheless I’m 75 and it was too easy to cross this border. And the third point, which I think is the most important point, ISIS in Iraq can only live because it’s supported by a discriminated part of the country. If you would have a national reconciliation in Iraq, then ISIS would be like a fish without water. The same is true in Syria. If we succeed, for example, in Geneva with a national reconciliation, then ISIS is isolated, ISIS is defeated.”

This story was originally published on The Takeaway.