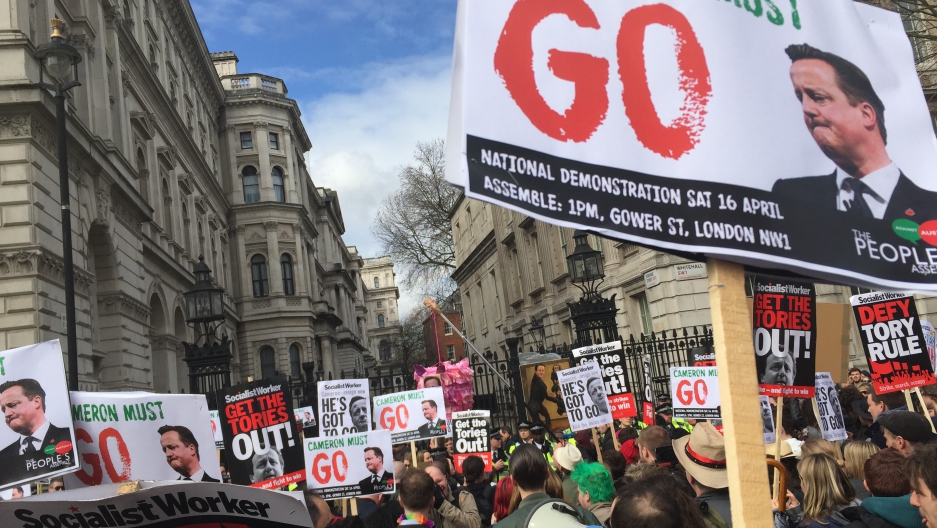 Protesters outside 10 Downing Street in London calling for the resignation of Prime Minister David Cameron.

David Cameron, one assumes, had a rough Saturday morning thanks, in part, to an Op-Ed written by a Abi Wilkinson.

“On Saturday at 11am, as many of us as possible need to gather outside 10 Downing Street and demand change,” she wrote. “No ifs, no buts. If we don't make our anger known now, there's no chance that things will ever improve.”

The hashtag #resigncameron starting trending on Twitter and Wilkinson's words seemed to resonate with thousands of people, including the pop star Lily Allen.

I will be protesting at no10 tomorrow, unless of course he resigns before then. You should too, #ResignCameron

Then Edward Snowden picked up on it and encouraged people to join.

Pretty soon Wilkinson had more than 6,500 people saying they were interested in attending her Facebook event announcing the protest. Most seemed to be reacting to the behavior of Prime Minister Cameron last week where he kept mum over the revelations in the Panama Papers. Then at the very end of the week, he admitted, in a sweaty Nixon-esque interview, that he had a small sum of shares in an offshore company set-up by his father.

He did not break any laws, but the optics were critical.

The protesters certainly understood that well. When thousands showed up to 10 Downing street on Saturday morning, they came dressed in Caribbean attire. People wore leis and, of course, Panama hats. Even the weather cooperated.

As the protest started, the clouds parted and the sun — an unfamiliar sight in London this time of year — appeared alongside blue skies. 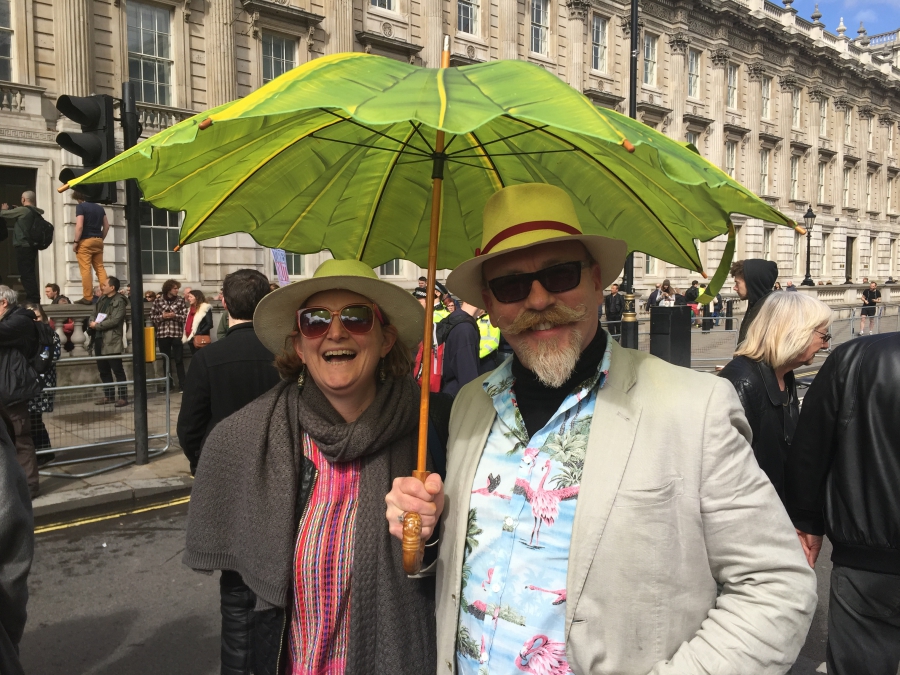 People dressed in a Caribbean theme to protest David Cameron in light of the recently disclosed Panama Papers.

That’s where I found Wilkinson. She sat across the street from 10 Downing with a hand pump. She was busy pumping air into pool toys, bananas and palm trees. "I’m blowing them up because if all these UK companies get to pretend they’re in tropical hotspots, why can’t we pretend we’re someplace tropical as well?” she says. “For one thing, we want to make it fun. But we also want to make a point.”

You could also make the point that social media can have quite an impact. She didn’t lead the protest. She simply organized it. And a simple Facebook event invite prompted thousands to come out on a Saturday morning and rally in front of the Prime Minister’s residence.

Thousands did show up, of those, at least 2.9 thousand came according to the numbers tallied on her invite post. They ended up blocking two lanes of traffic. Double-decker busses sat in rows behind them, stretching to the vanishing point. The protesters held signs that read, “Cameron must go,” and “Why are you still here?”

The protesters blocked traffic for a half an hour. During that time, I met one man who told me, "You'll want to stick around and follow us, as we're going somewhere you might find interesting.” 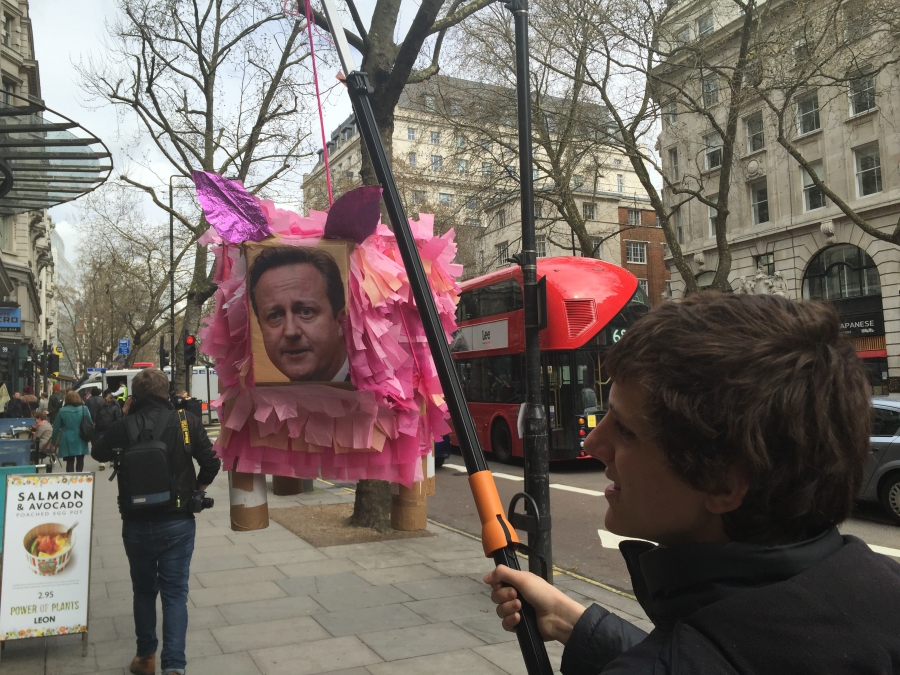 A protester carries a giant pink pig piñata with the face of Prime Minister David Cameron on its head.

Before we get to where the protest went, I need to talk about the London police. Friday night, I accepted the assignment with some hesitation. I'd covered protests before, in Santiago, Chile, and Minneapolis, Minnesota. Both times, I’d had to run from pepper spray used by riot cops in full tactical gear. And honestly, I didn't feel like getting pepper sprayed on a Saturday morning.

No one does. But this was different.

During the protest in London, three police officers wandered through the crowd, shaking hands and making introductions. None held weapons. They smiled and laughed with the protesters.

I couldn't even spot a pepper stay canisters. And I tried. Their job was to let people protest, peacefully, and not threaten or antagonize them while they did.

And even in a particularly tense moment that I’ll explain later on, the London police did an incredible job at remaining polite and controlled throughout the entire day. I didn’t shed a single pepper sprayed tear.

Back to the protest: The group abruptly left 10 Downing Street at 11:30 am. The marched down the city streets and sidewalks. The group stretched several blocks.

No one, aside those up front, knew where the group was going. "But hey, it’s nice outside, right?" says Dominic, a protester who came down from Manchester. "And I’m here to try and stop the hideous corruption that goes on in this government."

We continued to walk for a while when the march took a sudden left-hand turn, and stopped at a peculiar spot: outside the Grand Connaught Rooms.

At the Grand Connaught Rooms — a wedding and event center — a protester told me that David Cameron and Tory members were holding their Conservative spring meeting. It’s not certain if Cameron heard or saw the protesters, but it’s definitely hard to ignore the voices of around thousands of people shouting in unison, "Hey! Hey! Ho! Ho! David Cameron has got to go! Hey! Hey! Ho! Ho!"

A row of police blocked the entrance to the Grand Connaught Rooms. But eyes peaked out of window blinds above. 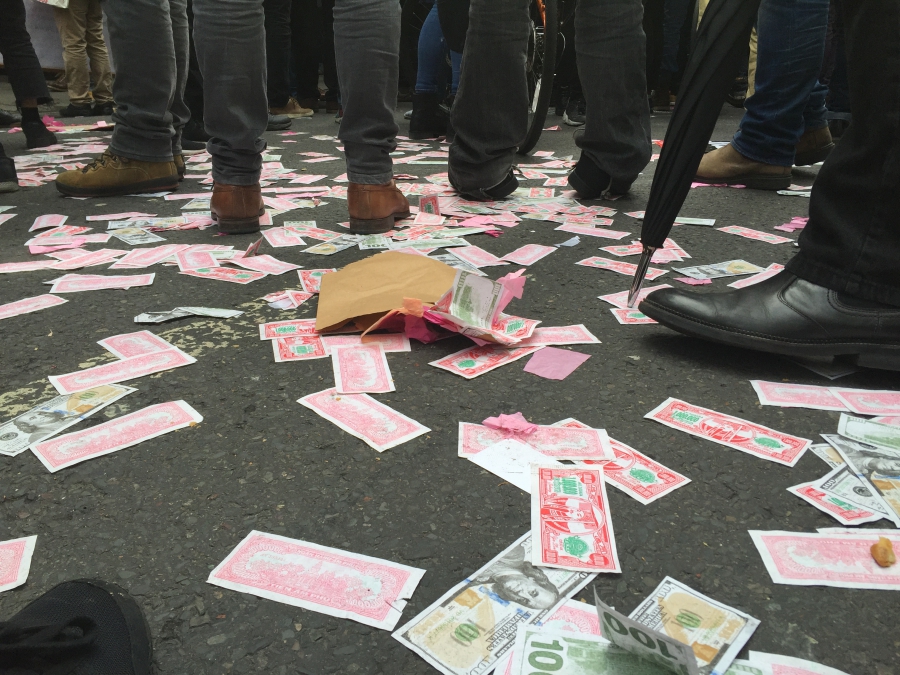 Fake money covers the street in London where thousands called for the resignation of Prime Minister David Cameron.

The only instance where things got tense was when a couple young guys left the hotel and mocked the protesters as they went to their luxury SUV. They revved the engine loudly, while trying to make a three point turn to exit the street.

A small group of protesters heard it and two stepped in front of the vehicle. Then three. Then four. Then a portion of the crowd surrounded the car and started slapping the windows. The guys’ faces went from cocky to frightened, and then stressed. One protester even hopped on the hood of the SUV for a moment. But police soon came and escorted the car down the street, slowly and carefully.

No one got pepper sprayed. No one got ran over. And no one, as it looked like from my vantage point, got hurt.

Eventually, the attention went back to the entrance of the Grand Connaught. People took turns giving speeches through a portable speaker system. They talked of the Panama Papers and of David Cameron needing to step-down. The final speaker was the political satirist Jolyon Rubinstein. He says the thousands came to protest for a simple reason.

"It's because of injustice, mate," Rubinstein says. "I think we live in a world where people feel personally offended when they're shown the information [in the Panama Papers]. And long gone are the days when information can just be controlled by a couple of gatekeepers. This stuff is now out there and with internet and Twitter and Facebook and Snapchat … this stuff goes viral and suddenly, 'boom!' A whole change happens."

Cameron has yet to step down as of this publish date. But there’s another protest planned for next week. So if he thought this Saturday was rough, well, just give it some time.