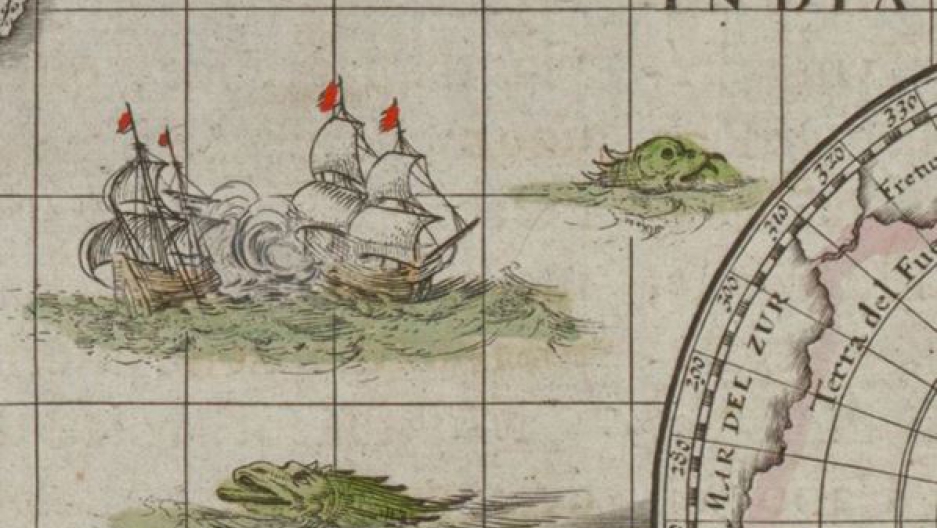 Let's face it. Paper maps are a bit out of fashion now that we have smartphones. But old world maps and atlases are chock-full of history, of once-uncharted territories — and if you zoom close, "sea monsters."

That's the playful moniker Dory Klein of the Boston Public Library uses for the creatures found in centuries old maps. She's an education and outreach assistant at the library's Norman B. Leventhal Map Center.

“In the Medieval and Renaissance period in Europe, people didn't really know what was out there,” Klein says. "So your corpus of knowledge came from folklore and the Bible. And so in that world, monsters could very well be real and they were just part of this supernatural landscape.

"When a map maker didn't know what was out there," she says, "he might just plop some little creature into the map to signify, 'I don't know what's here but it could very well be a dangerous creature.’”

You won’t find sea monsters in every map from earlier centuries.

Cartographers drew these creatures to adorn maps that would be on display in upper-class settings, such as fine homes or castles. Maps made for navigators heading out on ocean expeditions would have been more utilitarian, says Klein.

“So if you were creating a map that would've actually accompanied sailors out to sea, it would've been generally much more practical information," she says. "They would've had an idea that there were probably monsters out there and the map maker didn't need to tell them precisely where to find them. People back in Europe, however, really wanted to get a feel for their world without leaving home because travel was very difficult at that time.”

So maps became a way to understand the world without actually going out exploring.

Look carefully at this map and try to find a sea monster. Or this one.

The fantastical creatures appear in a variety of forms. Some resemble familiar figures, like the Muppets. Some are scarier than that. The figures that appear on a 1525 edition of Ptolemy’s Geographica, for example, give Klein the heebie jeebies.

“I saw a little man standing upright with horns and he’s cooking a woman, and she has this blithely complacent expression on her face because this was a wood cut and it was very hard to convey detail, so it was simultaneously horrifying and slightly amusing," she says. "It was a jolting reminder that all of the monsters that you see embedded in these maps really were genuinely scary to the people who are looking at them.”

In earlier centuries, Klein notes, there was a prevailing belief that every land animal had its ocean equivalent: “sea-pigs and sea-bears and sea-elephants and seahorses.” In short, mapmakers let their imaginations run wild.

Sea monsters have mostly disappeared from modern maps. Klein says they started to fade away toward the end of the 17th century as navigational and printing technology improved.

“It was easier to convey more accurate information," she says. "So you might see pirate ships as an indication of, ‘There are dangerous pirates here’ or, 'These are good fishing waters, 'You’ll find whales here,’ but it wasn't an immediate disappearance [for the monsters]. It was more of a fading out.”

If you like #MapMonsterMonday, then you’ll love today’s episode of PRI’s “The World" with … https://t.co/hcFX6bvjyh pic.twitter.com/aNX5QMQugA

Klein wanted to find a way to reach out to anyone who's interested in early maps, but may be intimidated by the flowery scripts, Latin words and depictions that are nothing like the world we know today. So she came up with #MapMonsterMonday.

"I wanted to connect people with our collections and make these maps a little more accessible and a little more fun," she says. "They’re beautiful and fascinating and the stories behind them can turn into just a wonderful rabbit hole of research.”

We’ve been getting lots of questions about #MapMonsterMonday, so we thought we’d, um, cough up some answers. This monster can be found off the coast of #Argentina in Hendrik Hondius’ "America Noviter Delineata,” published in 1638. Today, we’re inclined to view these creatures as whimsical, but to medieval and renaissance cartographers and map readers, they were the real deal. During the Age of Exploration, sailors’ tales were among the primary sources of information for cartographers trying to portray the ever-expanding known world; infused with the folklore and biblical stories that shaped their worldview, these tales populated the oceans and lands unknown (to Europeans) with all manner of sirens, dragons, blemmyes, ichthyocentaurs, cannibals, and other large, toothy beasts. You’ll notice that this particular monster appears alongside Spanish explorers, an indigenous South American, and what appears to be a monkey; to a reader in 1638, each of these beings was as real as the next. #Map monsters gradually began to dissipate toward the end of the 17th century, as navigation and technology improved, and as the printing press made it easier to communicate more accurate information. For a time, they were used symbolically, to indicate unknown territories, the supposed savagery of the locals, or the power of a European ruler or noble. Eventually, they were replaced by more practical images, such as ships indicating safe passage or dangers in the form of pirates or competing sea powers, or fish and whales to indicate good fishing waters. Today (and every Monday), we at @bplmaps celebrate these monsters as wonderful details that offer us a glimpse into the minds of mapmakers and map viewers of medieval and renaissance Europe. Hondius, Hendrik. “America Noviter Delineata.” Appears in Mercator and Hondius' Atlas Novus. Amstelodami: Apud Henricum Hondium & Joannem Janssonium, 1638. http://maps.bpl.org/id/15515.