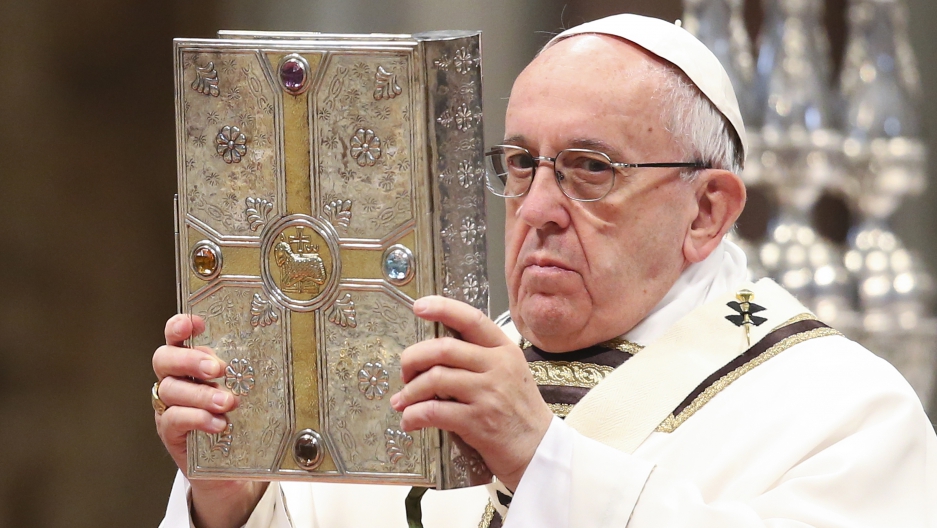 Pope Francis holds the book of the gospels as he leads the Chrismal mass in Saint Peter's Basilica at the Vatican.

Nope, that's not the title of a new self-help manual hitting bookstores this weekend.

"The Joy of Love" is the English translation of Pope Francis’ latest apostolic exhortation, Amoris Laetitia.

It's a 256-page document offering the pontiff's thoughts and recommendations on matters related to love and the family.

Inés San Martín was one of the first people to get a copy. She's the Vatican correspondent for Crux, based in Rome.

“Making a quick summary of what Pope Francis wrote in 256-pages is an almost unachievable goal but let me put it this way, Pope Francis wrote about the family and he left basically, absolutely no issue untouched,” San Martín told PRI’s The World.

From issues of same-sex marriage to what happens to divorced Catholics who were remarried in a civil court and cannot receive communion to female genital mutilation — the document certainly covers a lot of ground.

Today’s apostolic exhortation is the result of two successive synods, or assemblies of bishops, that Francis initiated on the situation of modern families. These two meetings held in October of 2014 and 2015 resulted in a lot of intense discussion between both liberal and conservative bishops from around the world.

In the end, neither the liberal nor the conservative camp got everything they wanted out of Friday’s exhortation.

Except, it seems, for the situation of same-sex couples looking to get married with the approval of the Catholic Church. Pope Francis came out decidedly against same-sex unions in the document.

While liberal members of the church were upset that Pope Francis wasn’t as welcoming with gays and lesbians as was expected, she says, the same liberal camp was happy that the pontiff seems to have opened the door for Catholics who have divorced and were civilly married to be able to access the sacrament again on a case-by-case basis.

Conservatives in the church were not happy about this.

“Even though Pope Francis didn’t fully open the doors, he did leave a space for doubt or what he called ‘discernment,’” says San Martín.

This very contentious fact didn’t actually come in the body of the long document, but in a footnote.

“There were two very specific footnotes on chapter eight that opened the doors for the divorce and the remarried to access the sacrament but it’s not in the body of the text. That caused a lot of confusion today,” the Vatican correspondent says.