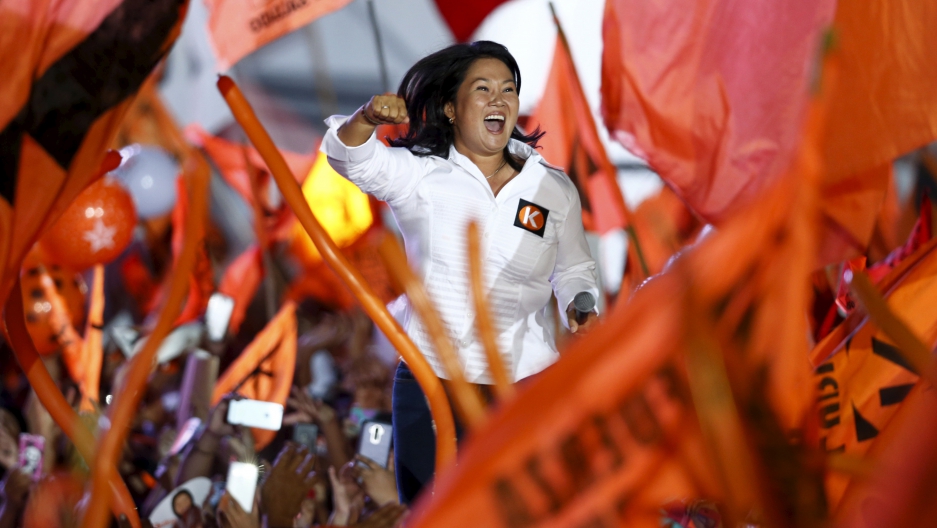 Update: Keiko Fujimori won almost 40 percent of the vote in Sunday's election in Peru, the highest total but not enough to become president outright. She faces a tough second round on June 5 against Pedro Pablo Kuczynski.

Peruvians headed to the polls this Sunday under the long shadow of jailed former President Alberto Fujimori.

His daughter Keiko, 40, won the highest share of the vote — 39.5 percent — and is now gearing up for a second-round election on June 5 against the runner-up.

Her success has many here worried that the Andean nation may be about to repeat one of the bleakest chapters of its history, when Alberto Fujimori’s autocratic 1990-2000 government presided over serial human rights abuses and engaged in rampant corruption.

That includes sending in tanks to close down congress, harassing critics and the forced sterilization of thousands of mainly poor and indigenous women.

The disgraced 77-year-old is currently serving a 25-year sentence for ordering the kidnapping of two of his opponents, directing death squads against terrorism suspects and using public funds to pay corrupt journalists to smear his rivals. Anti-graft investigators say $600 million of taxpayers’ money vanished without trace during Fujimori’s presidency.

Yet Alberto Fujimori is also revered by many here for taming an economic crisis, including 12,000 percent inflation, and credited with crushing the Maoist Shining Path rebels, who killed 31,000 people, many of them in humble rural communities.

Keiko Fujimori has been attempting to distance herself from her father’s crimes while taking the credit for his achievements, and also moving her Popular Force party to the center right.

She has vowed not to pardon her father, although most Peruvians remain skeptical.

She's backed same-sex civil unions and abortion in rare cases, positions that have generated controversy among her hard-core base, which includes many conservative Catholics and Evangelicals.

She has also pledged to respect human rights and Peru’s democratic institutions — she even signed a document to that effect at a presidential debate last Sunday.

“I know how to judge the history of my country,” she said during the televised debate. “I know which chapters should be repeated, and I’m very clear about which ones should not.”

She was widely expected to win the most votes on Sunday but not the 50 percent needed to avoid a June 5 runoff.

Her rival is Pedro Pablo Kuczynski, 77, a business-friendly former prime minister, who earned 22 percent of the vote (with more than 80 percent of votes counted).

Investors are celebrating the occasion of two right-wing candidates, the Associated Press reported.

The leftist, third-place contender garnered just 18 percent, and analysts are struggling to see which way her voters might swing.

Pollsters warn that the second-round election will be highly unpredictable and that Keiko, despite her large lead, could be vulnerable. As many as half of the voters say they would never vote for anyone associated with the Fujimoris.