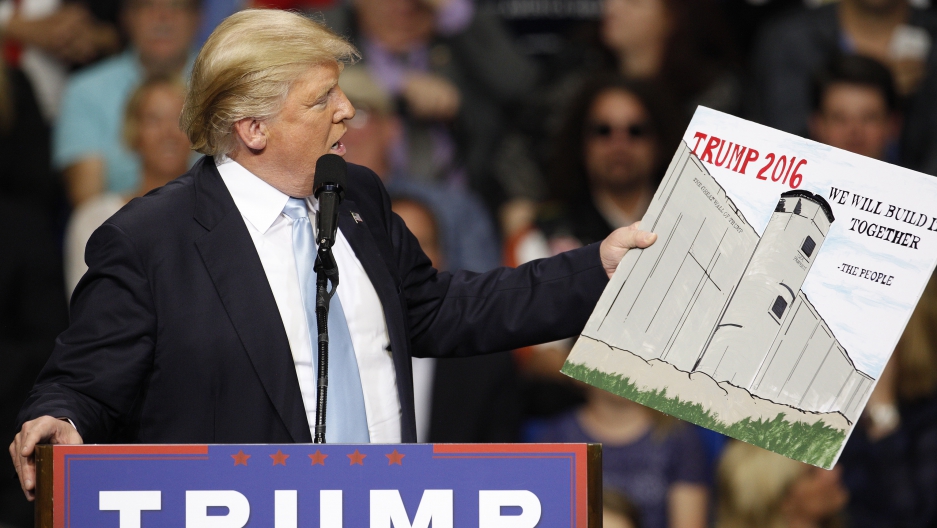 Republican presidential candidate Donald Trump holds a sign supporting his plan to build a wall between the US and Mexico from a member of the audience at his campaign rally in Fayetteville, North Carolina on March 9.
Credit:

Republican presidential candidate Donald Trump keeps insisting he wants a new border wall and that Mexico will pay for it. No way, says Mexico.

According to a Trump campaign memo, if Mexico doesn't pay, he wants to cut off money transfers to Mexico, the remittances workers in the US send to their families south of the border.

The memo basically echoes earlier comments Trump has made along the campaign trail, when he’s suggested seizing all remittances tied to "illegal wages."

It says that if elected in November, Trump would use an anti-terrorism law to cut off any money transfers from the US to Mexico if the customers can’t prove they are legally in the US.

Some are alarmed. Contreras asked one elderly Mexican woman, sitting in a park, if she was worried about Trump’s proposal to cut off remittances. “She stood up suddenly and was startled by the question. She said ‘my family depends on remittances’ and ‘it would definitely be a blow to my personal economy,’ and then she thought it through a little bit and she just said. ‘I think he’s a little loco.’”

Mexican President Enrique Peña Nieto seemed to dismiss the proposal as campaign rhetoric. "The [Mexican] presidency has no comment on any opinion made in the heat of the electoral process to choose candidates for the US presidency," the Peña Nieto's office said in a text message to Reuters.

Still, remittances represent a big part of the Mexican economy. They are an important source of foreign currency at a time when international oil prices are at an all-time low.

According to the Mexico’s Central Bank, those money transfers from the US to Mexico for 2015 came to nearly $25 billion. That amount currently exceeds the revenue Mexico is able to get from oil exports.

Trump would force Mexico to pay billions for a border wall by threatening to block money transfers. https://t.co/wFb0pI2Di9 @CCTV_America

The flipside of this coin is that Trump’s campaign memo, first published in the Washington Post, goes on to say that if Mexico agrees to fund the wall, Trump would drop the proposed rule. Mexico, it says, would need to make a one-time payment of $5 billion to $10 billion for the wall.

Hard numbers for a wall along the 2,000 mile US-Mexico border are difficult to come by. Independent estimates range from $5 billion to $25 billion, plus annual maintenance costs, according to the Politifact website. Trump’s own estimates for both the wall’s cost, and height for that matter, are problematic to many Mexicans, says Contreras.

“Look at the size of the border wall that Mr. Trump says he’d like to build. First of all he doesn’t even seem to agree with himself. First he said the height should be 15 feet, then he went to 20 feet, and at one point he said 35 feet. It sounds like the angrier he gets at Mexico, the higher he wants the wall to be.”

Of course if you make a wall higher, it will require more cement, infrastructure, rebar, and more design. “It’s probably impossible to put up the kind of wall he’s talking about and not affect the tremendous amount of daily commerce that takes place between the US and Mexico,” Contreras says. The countries traded each other combined goods and services worth $536 billion in 2012, according to US government figures. “So there’s going to be a lot of interests affected if that sort of thing ever becomes a reality on the US-Mexico border. From the Mexican viewpoint, it just sounds like a lot of rhetoric.”

President Barack Obama also weighed in on Trump's proposal to cut off billions of dollars in remittances sent by Mexican immigrants living in the US. “Good luck with that,” Obama said in a White House press briefing Tuesday, after characterizing the idea as “half-baked.”