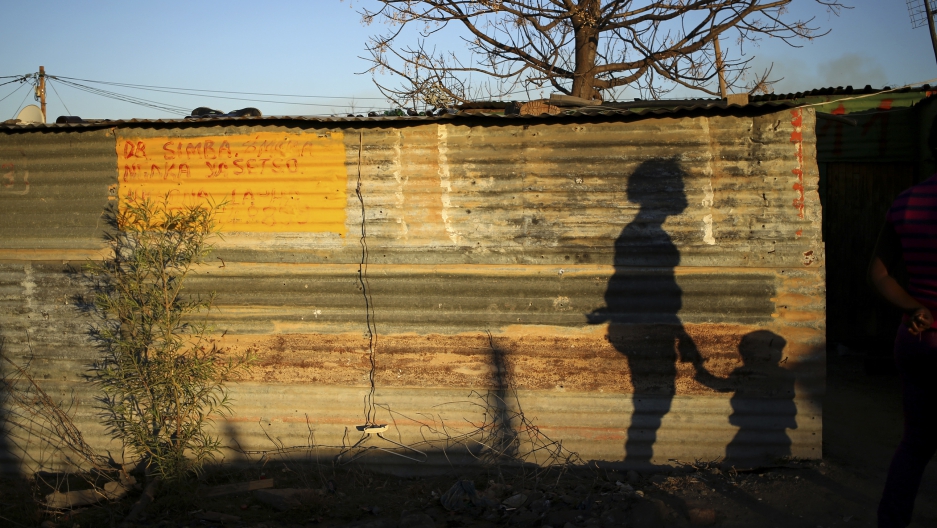 The shadows of a mother and child are cast on a shack in Marikana's Nkaneng township in Rustenburg, where many mine workers live, 62 miles northwest of Johannesburg. Taken on August 15, 2013, a year after South Africa's bloodiest post-apartheid labor incident awoke the world to the potential for unrest in the country's mines.
Credit:

A treasure trove of leaked documents has revealed how the world’s rich and powerful use offshore accounts to mask their wealth. It is a murky world filled with dodgy practices — and disturbing implications.

In South Africa, the “Panama Papers” released this week by the International Consortium of Investigative Journalists (ICIJ) have drawn fresh attention to one of this country’s biggest-ever frauds. The victims, including the widows and orphans of mineworkers, are still suffering today.

In its report, the ICIJ highlighted the story of Nick Kgopa, whose father was killed at a gold mine in northern South Africa.

Kgopa, who was 14 when his father died, survived along with his mother and younger brother on monthly checks from a fund for family members of slain mineworkers.

“One day the payments stopped,” the story says. “His family was one of many that lost out because of a $60 million investment fraud pulled off by South African businessmen.”

A group of people linked to Fidentia, an asset managment company, looted millions from investment funds — including death benefits meant to support 46,000 widows and orphans of mineworkers.

While poor South Africans paid the price, J. Arthur Brown, the former chief executive of Fidentia, lived the high life, buying racing cars, a rugby team and a game farm, according to reports. In 2014, Brown was sentenced to 15 years behind bars.

According to leaked records from Mossack Fonseca, two of the other men involved in the Fidentia fraud used the Panama-based law firm to create offshore companies. Mossack Fonseca was even willing to help one of them protect his money after South African authorities publicly linked him to the fraud, ICIJ reports.

The firm's records show that after the Fidentia scandal broke in 2007, Goodwin flew to Australia, and then to Manhattan, where a lawyer from Mossack Fonseca met him to discuss his holdings.

"Ponzi schemers and other fraudsters who bilk large numbers of victims often use offshore structures to pull off their schemes or hide the proceeds," the investigative report says.

The year-long investigation by journalists was based on a cache of 11.5 million records initially leaked to a reporter at German newspaper Süddeutsche Zeitung.

According to ICIJ, Mossack Fonseca did not answer questions about its relationship with Goodwin. A representative for Goodwin told ICIJ that Goodwin “had nothing whatsoever” to do with Fidentia’s collapse “or anything directly or indirectly to do with the 46,000 widows and orphans.”

#PanamaPapers: Is this where $60m in Fidentia's ill-gotten gains ended up - secretly protected by Mossack Fonseca? https://t.co/E535aSI0nJ

Some hope the revelations could help to track down a portion of the missing money. While curators were appointed to recover about 1.12 billion rand (about $74 million) for Fidentia’s victims, they have struggled to recover the misappropriated funds.

Tembisa Marele, spokeswoman for South Africa's Financial Services Board (FSB), said that while it was previously found that no funds had gone to Panama, the Mossack Fonseca leaks might lead to further investigations.

"In light of these developments, the FSB will once again look into the matter to see if further investigation or action is warranted," Marele said, according to reports.

Separately, state prosecutors have said they may reopen cases.

But John Levin, a curator for Fidentia, told Fin24 that, “except for the costs of registration of the foundations, no investor funds were diverted to these entities" based in Panama.