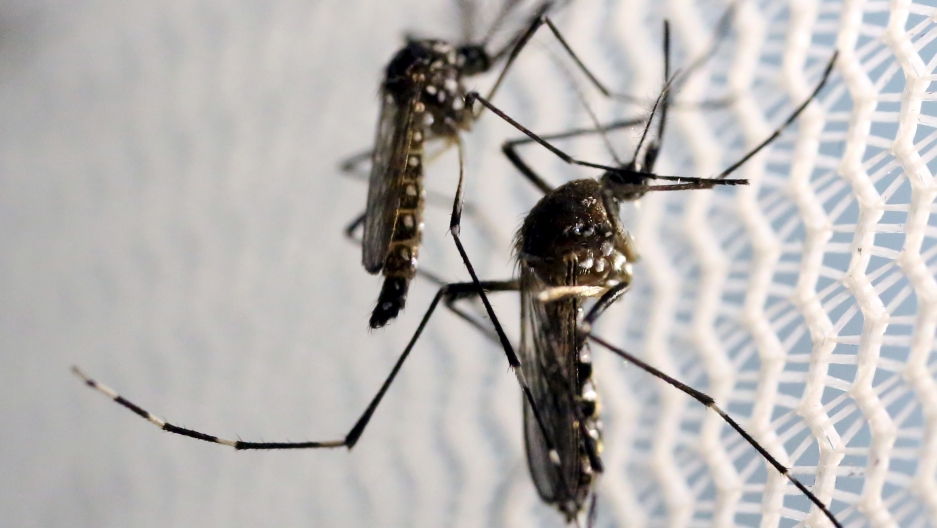 The World Health Organization’s fact sheet on the Zika virus contains a wealth of useful information about the mysterious disease that has spread across the Americas and is blamed for a surge in birth defects in Brazil.

One of its leading facts may sound pretty benign: Zika is transmitted by Aedes mosquitoes, mainly the Aedes aegypti species in tropical countries like this one.

There’s only one problem: It’s not actually a “fact” that this particular mosquito spreads Zika in Brazil.

Canada’s The Globe and Mail newspaper recently made the astonishing revelation that nobody has yet managed to identify the virus in a single Aedes aegypti mosquito — or any other species — captured in Brazil, where authorities estimate 1.5 million people have contracted Zika.

While experts strongly suspect Aedes aegypti is the main transmitter of the virus, they don’t know for sure.

Four independent mosquito experts contacted by GlobalPost confirm there’s still some uncertainty. While each says it’s likely that Aedes aegypti is the virus’ main carrier in Latin America, they also agree it is not correct to state this as a fact.

“I think it would be surprising if Aedes aegypti wasn’t the main vector, but the evidence just isn’t very strong yet,” says Scott Weaver, a mosquito expert and professor of microbiology and immunology at the University of Texas Medical Branch.

After being pressed on the issue, a top WHO researcher also acknowledged this. The recognizable black-and-white striped mosquito is just the most likely carrier, she says, but the United Nations’ health arm is not 100 percent sure, either.

Why is this important? Because cash-strapped countries like Brazil are spending hundreds of millions of dollars to educate citizens about Zika and to specifically eradicate Aedes aegypti mosquitoes — maybe even at the expense of targeting other potential transmitters.

Humans are trying to protect themselves accordingly.

Reporting on Zika in recent months in three major Brazilian cities, GlobalPost has never seen a single mosquito bed net in a home. Parents have consistently said they slather themselves and their children with mosquito repellent during the day, but don’t worry about the pesky bugs at night, since they’re told that the Zika-carrying mosquitoes are out in the day.

Dr. Florence Fouque, one of the WHO’s leading experts on vectors, the animals that carry viruses, explains the organization’s rationale in pointing fingers at Aedes aegypti: The black-and-white mosquitoes have been shown in lab tests to be extremely efficient at transmitting Zika, she says.

Aedes aegypti has also been found carrying Zika in other countries, including Mexico.

And, crucially, Aedes aegypti bites humans much more frequently than other species, notably those of the Culex genus, Fouque says.

The Culex quinquefasciatus mosquito has been known to spread such diseases as the West Nile virus.
Credit:

This predilection for biting human flesh is the key reason the WHO has pinpointed Aedes aegypti, Fouque says.

But Dr. Margareth Capurro, a mosquito researcher at the University of Sao Paulo, says the different appetite between Culex and Aedes mosquitoes isn’t as stark in Brazilian cities as it is elsewhere.

“If you put a human and an animal in a lab, the Culex will choose the human, but that’s not the same in the city, where Culex don’t have the same choice — there are [mainly] only humans to bite,” Capurro says.

And Capurro said her research indicates that Culex mosquitoes are far more prevalent in Brazil’s cities than Aedes aegypti. So even if Culex bite humans less often, they also come in larger numbers.

Still, Capurro thinks it’s more likely that Aedes aegypti is the primary carrier of Zika, but for different reasons.

She says the virus appears to be spreading much like dengue fever and chikungunya, which are carried by Aedes aegypti. She believes the Zika crisis would be much worse if the virus was, indeed, carried by Culex mosquitoes.

“Then it would be an Ebola thing,” Capurro says. “It would be huge, huge!”

Some Latin American countries recently reported a slowdown in the weekly Zika infection rate, according to the Washington Post.

Fouque says researchers in Brazil are rushing to test if Culex mosquitoes are transmitting Zika and should know within a month.

One of those researchers is Constancia Ayres, an entomologist at the Oswaldo Cruz Foundation medical institute in the northeast Brazilian city of Recife. She told The Globe and Mail’s correspondent Stephanie Nolen: “I believe Aedes can transmit the virus. But I believe it is possible that Culex is the major vector in Brazil.”

Until we know for sure, the WHO has to inform the public as best it can, especially given the limited resources available to some countries, Fouque says.

“The position of the WHO has to be consistent in a way to give the best chance to countries to do the best control that they can,” she says.

Nolen, who wrote a book about HIV in Africa, notes in her reporting on the Brazilian Zika epidemic that many specialists compare this outbreak to the mysterious early days of AIDS.

However, they caution about the still-unknown degree of sexual transmission of Zika. “It is difficult to prove this in an area with an outbreak — everyone who is likely to have had sex with someone infected is also likely to have been bitten by a mosquito,” she wrote.

Capurro and other researchers in Brazil are also working hard to catch and test a mosquito that’s infected with the virus.

This isn’t easy to do, since it requires expensive and sophisticated equipment and testing. But Capurro says she should know definitively within weeks whether Aedes aegypti is actually carrying Zika or not.