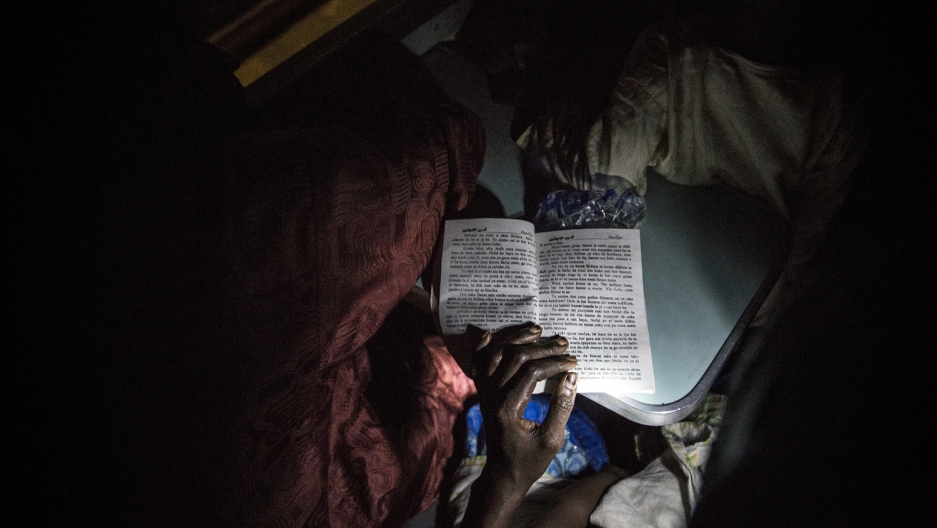 On a train home from Lagos to Kano, a Hausa woman reads a romance novel with the flashlight on her phone.

Not far from the epicenter of religious violence in Nigeria, a romance novel industry is booming.

The books shift between morality tales and classic pulp romance. Often written by hand in small composition books, the books are sold in crowded marketplaces, where you can buy thousands of different titles for a dollar or two. 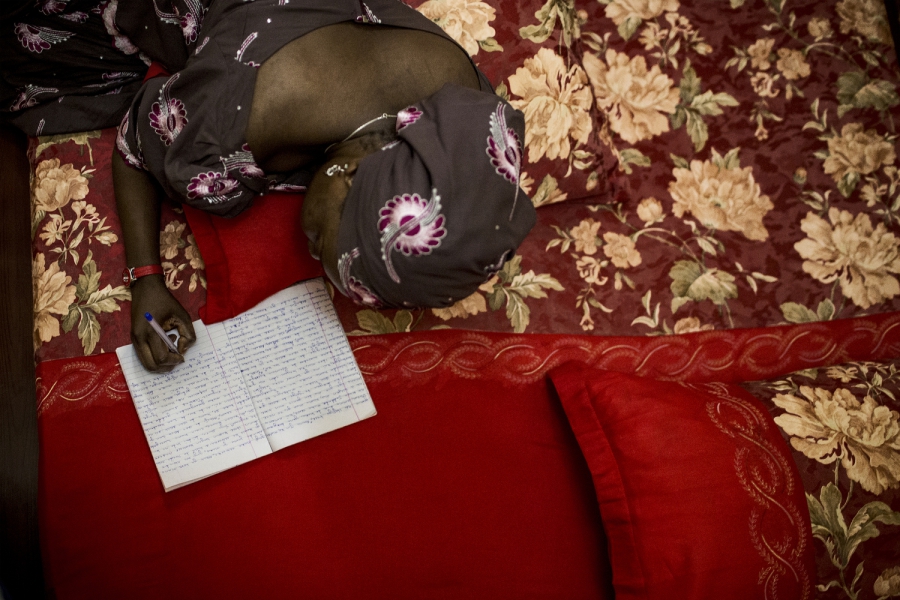 Hadiza Sani Garba writes her novels in bed or in her sitting room, by hand, in small composition books.

A few of the stories are also transcribed and published online. They're called littattafan soyayya, which roughly translates to “love literature."

The littattafan soyayya industry is the subject of photographer Glenna Gordon’s new photo book, "Diagram of the Heart."

The stories are mostly written by women, for women. They've been around since the 1980s, when Nigeria's economy crumbled and many authors turned to self-publishing their work. And amid Nigeria's current political turmoil, they provide an escape of sorts.

The chaos in Nigeria became much more widely reported after the terrorist organization Boko Haram kidnapped 276 school girls from their dorm in 2014, but the group has been around since 2002. At the same time, the government faces huge amounts of corruption and the country is split because of religious tension. 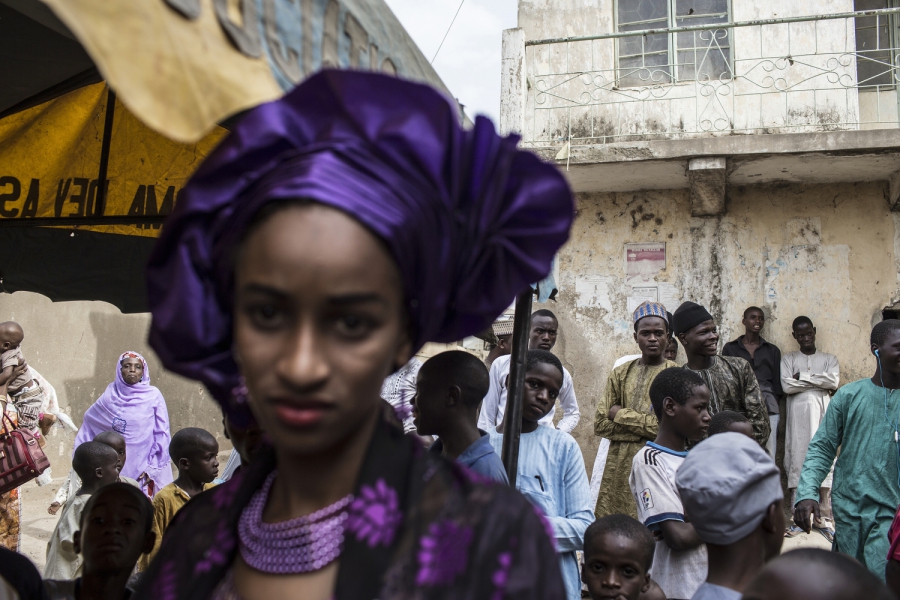 A bride at her wedding. Men stand on one side, and women on the other.

Gordon first heard about the genre after a friend suggested she read a book called “Sin Is a Puppy That Follows you Home,” which describes itself as an Islamic soap opera.

The book has a pretty complicated plot.

First a man brings home a second wife. That second wife turns out to be a prostitute. The first wife ends up separating from him, and is kicked out of the house along with the couple’s children. After time, she opens a restaurant and builds a new life. Meanwhile, the husband loses everything he has in a fire and his second wife leaves him.

At the end of the book, the original couple gets back together. But their power dynamic has shifted.

“Even though it doesn’t really look like a traditional feminist text in the way I might think of one, there has been a significant change in the course of the book,” Gordon says. 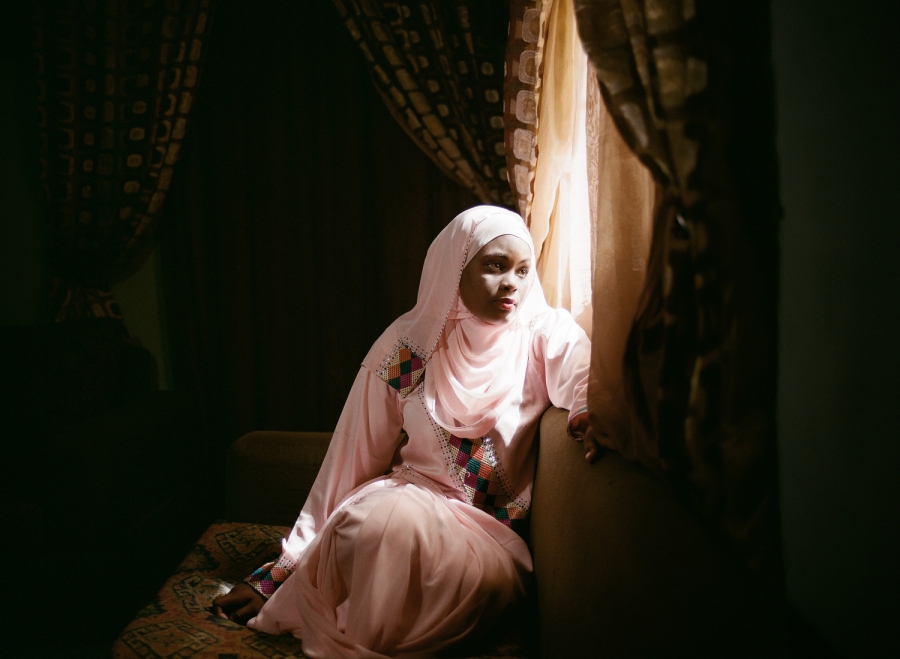 Novelist Farida Ado at her home.

Gordon says most people don’t know about Nigeria’s thriving publishing industry and culture of literature because of a language barrier. Books are often written in Hausa, and while the language is extremely popular — it’s one of the most widely spoken languages in Africa — the books are rarely translated into other languages.

Some local governments in Northern Nigeria have censored the books, and in 2007, the state governor of Kano — a state in northern Nigeria — publicly burned many books that he said were corrupting young people and encouraging moral indecency.

Today, authors are forced to register with the Hisbah, the morality police, as well as government officials. Gordon says at this point many authors self-censor to avoid the hassle. But their books used to be much more risqué.

There are people who don’t register and publish anyway, she says. Also the government is somewhat irregular in how it enforces the rules. 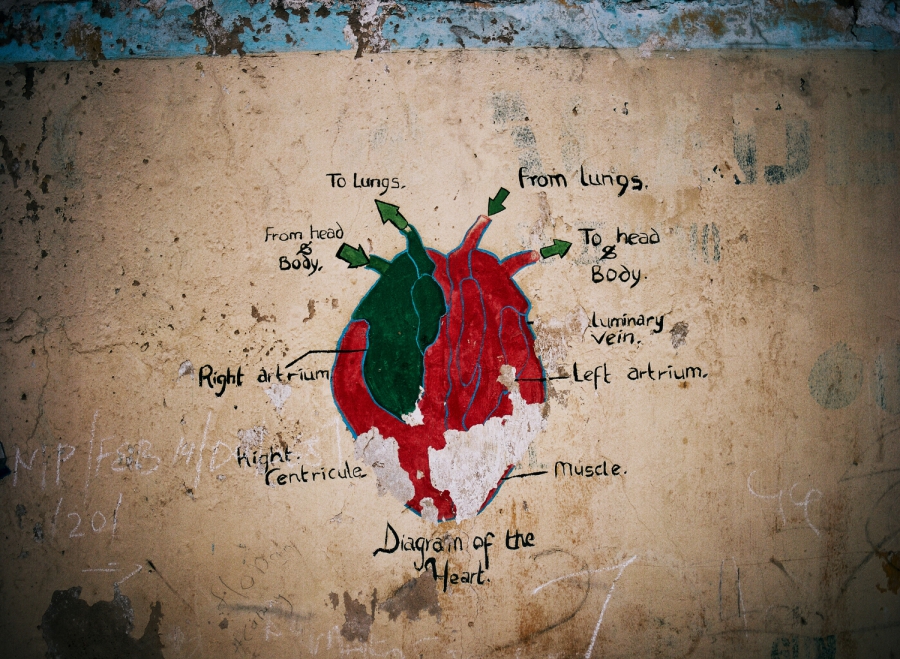 A diagram of a heart on the walls of a school in Kano. 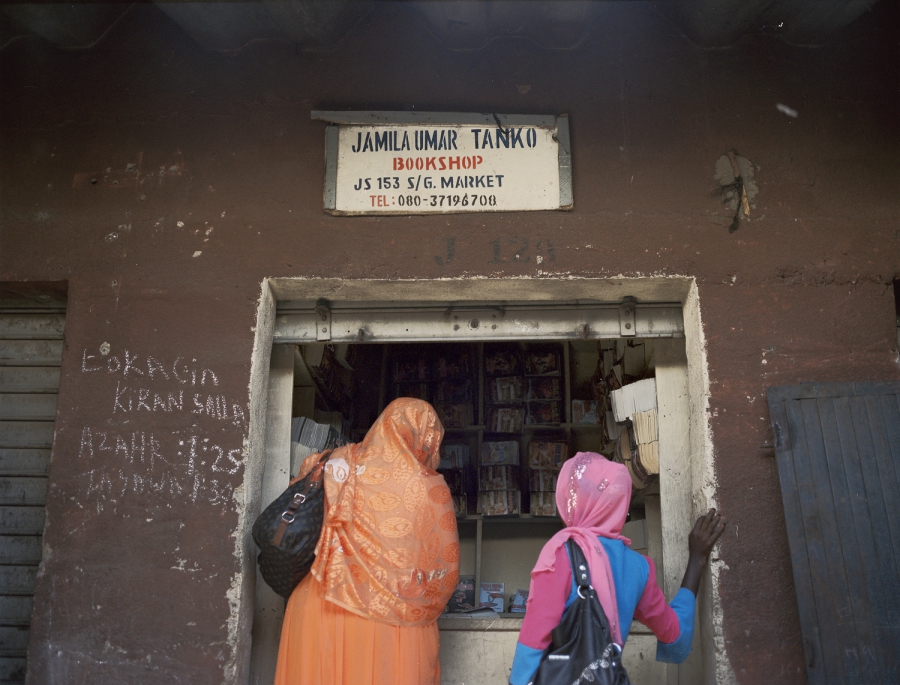 Jamila Umar was tired of the male shop keepers not paying her properly for her books, so she opened her own shop. 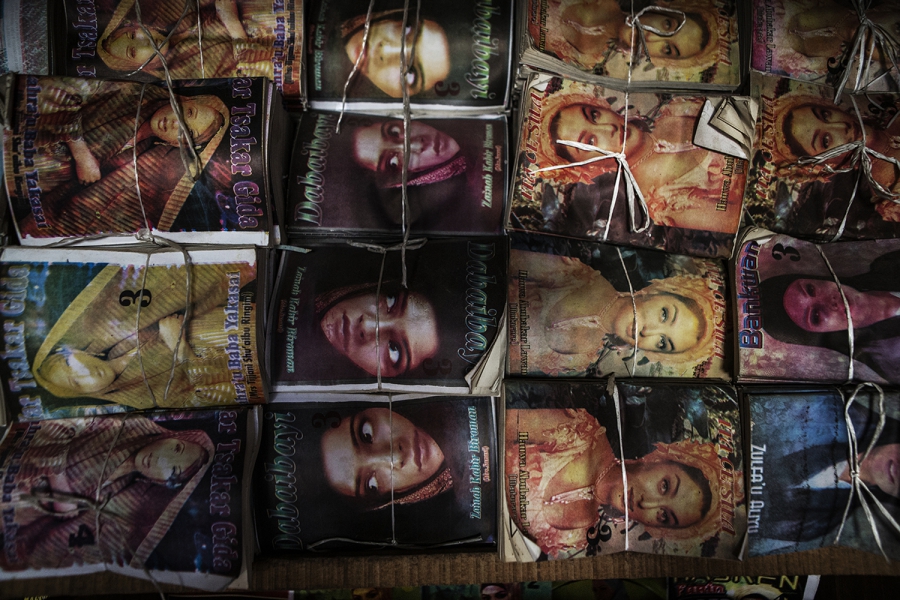 Books are tied up and packaged at the local market in Kano. 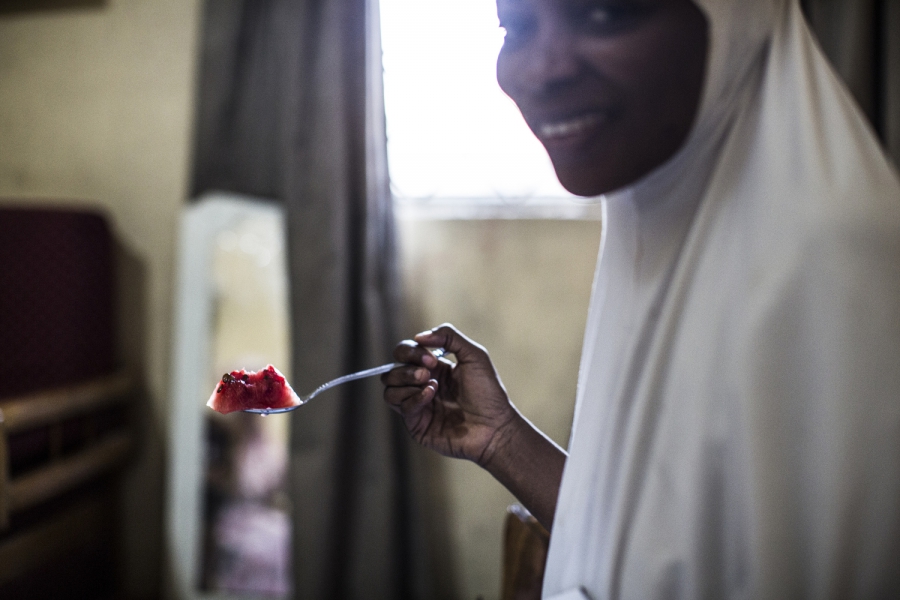 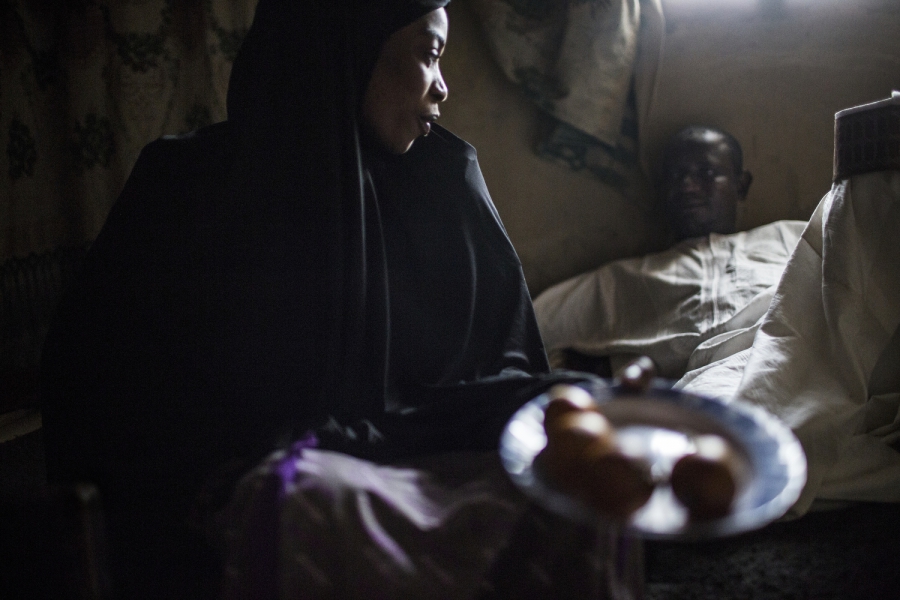 Rabi with a suitor, who later became her husband, bringing her a sweet fruit called agualuma. 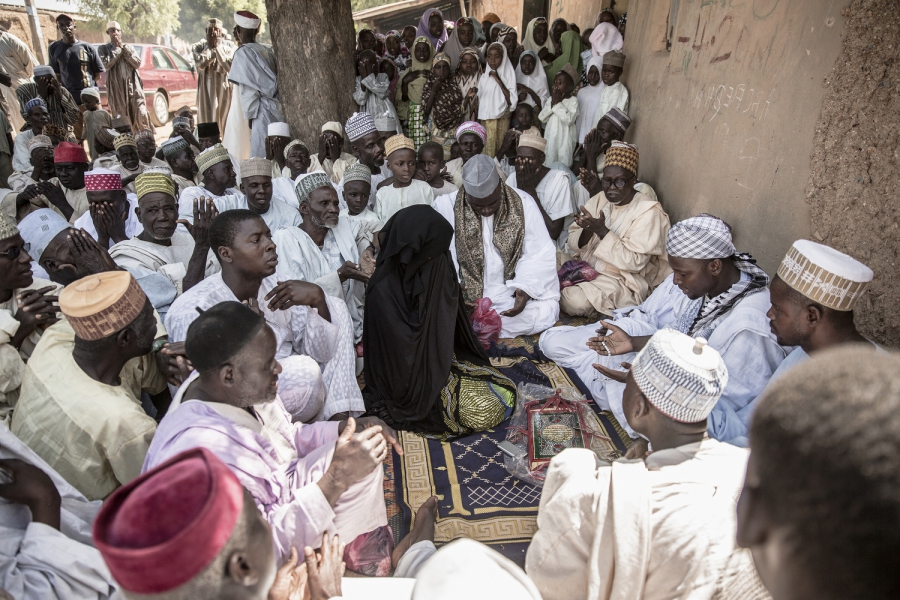 The wedding fatiah of a village girl. A contract is announced and the men of the village say prayers and recite blessings. Women rarely interact with men who are not their relatives

A previous version of this story misstated which authority censors the books and misidentified the state governor of Kano as the minister of education.