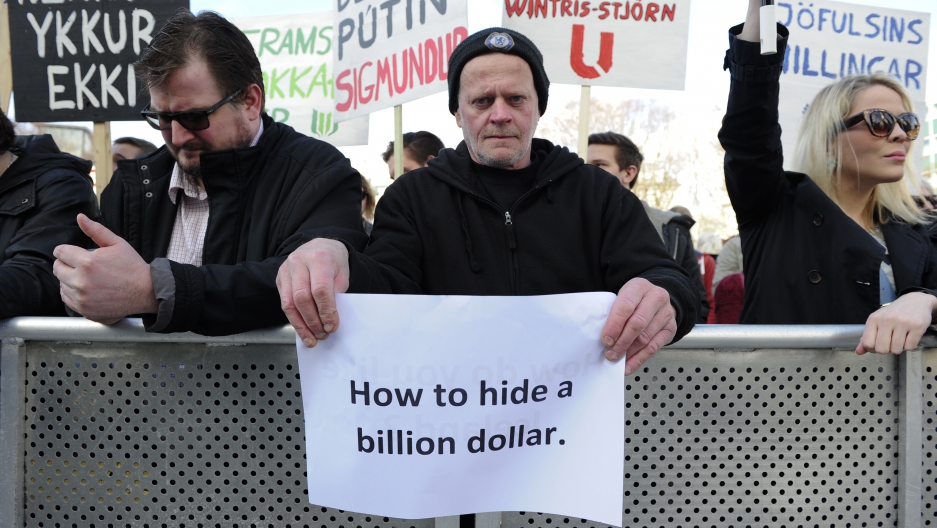 People demonstrate against Iceland's Prime Minister Sigmundur Gunnlaugsson in Reykjavik, Iceland on April 4, 2016 after a leak of documents by so-called Panama Papers stoked anger over his wife owning a tax haven-based company with large claims on the country's collapsed banks.

As details about the Panama Papers continue to emerge, the repercussions of this historic leak are beginning to be felt worldwide —  Icelandic Prime Minister Sigmundur David Gunnlaugsson resigned amid this global scandal.

But how does someone get wrapped up in a clandestine financial network? It’s actually quite easy to go to the dark side, says James Henry, an investigative economist and senior adviser for the Tax Justice Network.

“If you imagine the bar in ‘Star Wars,’” says Henry. “You have a collection of characters from all over the planet. You have money launderers, arms dealers, and in this case, leading public officials — we’re now up to 140 public officials, including quite a few prime ministers. And what they’re gathered to do is to basically keep their offshore wealth secret.”

It appears that Panama is just the tip of a much larger, elusive iceberg. Henry says there are at least 91 other tax havens around the world that provide secrecy for individuals engaged in dubious financial activities.

“There’s a whole industry — the global haven industry — that consists of leading law firms, banks, and accounting firms,” he says. “They’re enablers. Vladimir Putin didn’t go to Panama to set up his accounts. His people talk to other people, and one thing leads to another. It’s basically a network of sophisticated professionals who make a very nice living simply by offering secrecy and financial chicanery for the world’s elite.”

Can offshore tax havens ever be eradicated? The global community hasn’t cared much about financial trickery in the past.

“This is not new behavior — we’ve known about this for 40 or 50 years,” Henry says. “In the 1970s, I was covering a case called Castle Bank & Trust that involved offshore havens. In the 1980s, I went to Panama and ran across this very same law firm, which was helping [Manuel] Noriega at that point.”

He continues: “We’ve had case after case — from the Marcos money to the BCCI to the latest scandals involving Credit Suisse, UBS, and wealthy Americans — we’ve just known about this for years. The puzzle has always been why we didn’t really have the world community crackdown on it. And I think we’re now beginning to understand that.”

The issues surrounding offshore tax havens are political, not technical, Henry says. The Panama Papers show that several high-ranking government officials have helped themselves to public funds and hid those assets in offshore accounts.

“There’s no proof at this point, absolutely, that these people have been guilty of crimes, but there’s certainly a lot of smoke, and investigators are now going to spend time going through these files very, very carefully,” Henry says.

If the global community wants to get tough, there could be a few solutions to the international tax haven problem. For starters, banks could eliminate financial secrecy by forcing the owners of companies and trusts to publicly register, Henry says. He adds that laws could be passed to force government officials to declare their onshore and offshore wealth in public records.

“But it’s not something that any one country can do alone,” he says. “You have to get countries together, and many of the wealthiest countries, like the United States and the UK, have very powerful banking lobbies that are resistant to that, because a lot of this money ultimately ends up not in the haven countries, but back in the first world.”