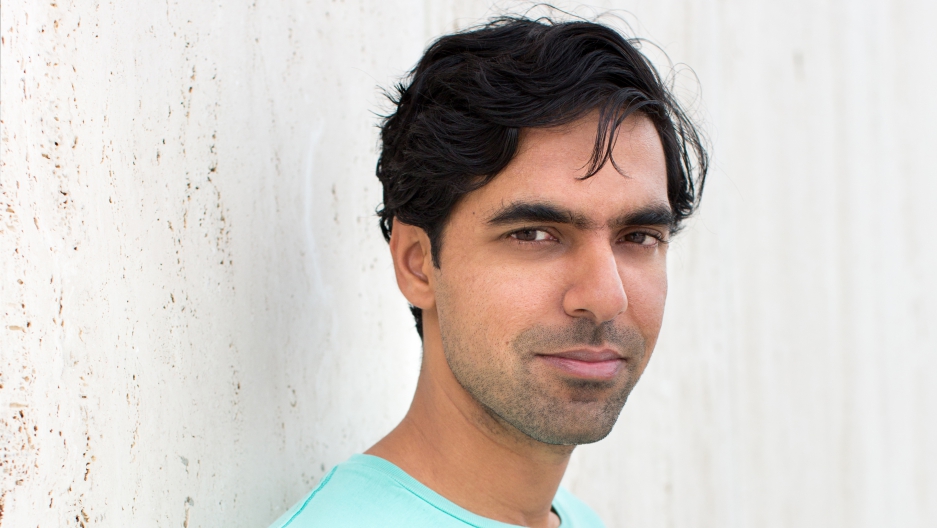 "The first reason I was interested in small bombs is that they are the most honest expression of terrorism," says author Karan Mahajan.

When bombings happen, we often read about them from afar, hear from the survivors from afar, and then try to understand why they occur.

But what motivates people to build a deadly device? Also, what about the aftermath, when the bombings ripple through peoples' lives? That inner thinking, of the bombers themselves and their victims, is harder to comprehend. But Karan Mahajan does just that in a way only fiction can in his latest book, "The Association of Small Bombs." It's just out to high acclaim, and follows his (also acclaimed) first novel "Family Planning."

Mahajan recently talked with us via Skype from Bangalore, where he spent some time at an artist residency. Originally from New Delhi, Mahajan has spent the last 14 or so years in the US and lives in Austin.

Monica Campbell: Your book begins with a terrible crime, when a bomb explodes in a Delhi market. It's a moment of violence you know personally. What happened when you were a kid growing up in Delhi?

Karan Mahajan: A bomb went off in 1996 at a market in New Delhi. I was 12 at the time and would go to that market to buy school uniforms. My grandmother was there the day before it went off. It was the closest thing [I have felt] to having a family member killed in an attack. It was in the deep freeze of my memories for years, but came back powerfully after the Mumbai attacks in 2008. I sat down and wrote the opening of this book in one sitting. I read about the effects of that bombing and had this full universe to tap into. I was about 25 then.

MC: What drew you into telling the story of "small bombs," the kinds that might get a fleeting headline and then disappear?

KM: The first reason I was interested in small bombs is that they are the most honest expression of terrorism. I would think that most terrorists are trying to set off a large event — a 9/11, the Paris attacks or those in Mumbai. The rest are small or failures to them. I knew thinking about it that way would give me a way into the mind of the terrorist that wasn't stereotypical: that a failed terrorist is more interesting than a successful one.

MC: In your book, we also meet a mix of characters in India. From the bomb makers and middle- and upper-class Indians, Muslims — what was the social mix of your own childhood growing up in Delhi?

KM: I grew up in a large, extended family that had been displaced by Partition. We lived in a part of South Delhi that borders one of the Muslim areas of the city, and I got a profound sense of the divisions between Hindus and Muslims. I did have interactions with Muslims growing up. My parents had Muslim friends. But the high school I went to, my class of 200, had only a couple of Muslim students. You could see the ghettoization.

But my real interest in the city, in Delhi's culture, came after I went to college in the United States at age 17. I encountered the culture shock of the range of books you don't get taught in India. In Delhi, you read government-approved stories that don't have political associations, that don't have risk. But in the US, I found writers like V.S. Naipaul who were speaking directly to me. Salman Rushdie. R.K. Narayan. When I came to the US, I immediately recognized how false my own writing style was and I started reading a great deal of literature and fiction.

MC: Tell us more about those first days in the United States.

KM: I got to the States in 2001, one week after 9/11, to go to Stanford. I remember my mom saying that I should wait a year before going. I'm a US citizen. I was born here and came to India when I was 2 years old. My mom was afraid I would get drafted. My response was to say, "Mom, I have freshman orientation!" That was what was important to me. So I was on one of the first flights to leave from India to the US. It was surreal because the flight was largely empty and I kept moving from one seat to another. I didn't carry any hand baggage because my dad said it'd be a bad idea to do that. I also wore this hilarious fishing jacket with pockets filled with paperbacks. When I landed, the immigration officer said, "Karan Mahajan. Is that a Hindu name?" I said yes. There was this fear at the immigration counter.

I was fairly apolitical in India and was thrust into a political environment post-9/11. Soon after, there was the parliament attack in India in December 2001 and that brought India and Pakistan near nuclear war.

And in 2002, there were the Gujarat riots and the Muslims killed there. We saw how India responded to terrorism by cracking down on Muslim student groups and sending people underground. And then we saw how George W. Bush denied [Narendra] Modi [who was the chief minister in Gujarat during the riots and is now India's prime minister] a visa to the US. This back and forth, these different reactions, were very formative for me.

I tried being an activist in the US. There was an anti-Iraq war movement building at Stanford, even though it's not the most political campus. But my views changed. I started reacting as a novelist would, seeing the nuance and psychology of things. I saw that in order for activism to work, it has to bypass all that, bludgeon it.

MC: You felt fear at the immigration counter but Stanford felt safe?

KM: I felt safe in California and got sucked into the bubble of college life. I don't quite remember feeling fear on campus as a brown person. But there are microagressions that you suffer from constantly as a person of color, though it's hard to confirm. There's that feeling of discomfort with yourself as an outsider. You have an accent, there's a feeling of inferiority and lack of self-esteem that comes with that.

MC: Did this affect your writing?

KM: It's hard for me to get into the psychology of that, but I think when you're feeling yourself being constantly misrepresented in daily interactions, you want to seize whatever little power you have. Writing was one way to make something meaningful of otherness. Immigration was a shock to my system. At the time, I lacked the capacity to understand the extreme changes I was going through.

MC: What was it like going back to India for the first time after spending time in America post-9/11?

KM: I went back the summer of 2002 and was involved briefly with what happened in Gujarat, screening documentaries about the riots. That was meaningful. I met Muslim students my age. It was eye-opening to get back into the diversity of Delhi. It's not a subject that I would have been comfortable getting into, the lives of Muslims, in the early 2000s if I hadn't had firsthand experience. I wouldn't have known how to enter the language of Islam.

MC: Now, years later, your book takes us inside the number of lives linked to a single bombing. It's impossible to read your book and not look at the headlines differently. Does your book in some way come out of frustration with how the media portrays this type of violence?

KM: My goal with the book was to take on some of that emotional state and put it in the service of something larger. I read about one of the masterminds of the Bombay attacks and how he lacked identity in some profound way. The news didn't explain this well and often settled on the world "radicalism" or getting "radicalized" to show the changes they went through to get to that state of devotion. I wanted to understand people who had found new systems for themselves. I wanted to think about what it was like to be a bombmaker as a life project.

You'll also notice that "jihad" is never used in my book, even when I talk about Islam. These terms have become extremely loaded for American readers. But if you want to get inside these worlds, you have to see how the people inside see things.

MC: What's goes through your mind when you see news of a bombing?

KM: Every time I see news about a bomb, I'm reminded that both the media and readers have a short memory. The thing that people ask after every event, after the Boston Marathon bombing, for example, was why did this happen now? After five or six years, I've exhausted my curiosity. It always seems self-evident. I see it as a terrible symptom of wanting to seize attention. Then, what happens? We give terrorists undue attention, playing into their hands.

I think about the 9/11 hijackers. I still have questions about how they became extremely religious and then spent a year laying low in America. What was that year like? You can only imagine what it was like living undercover, learning how to fly planes. Fiction can get to that.

The first scene of "Association of Small Bombs," shared here with permission from the author.