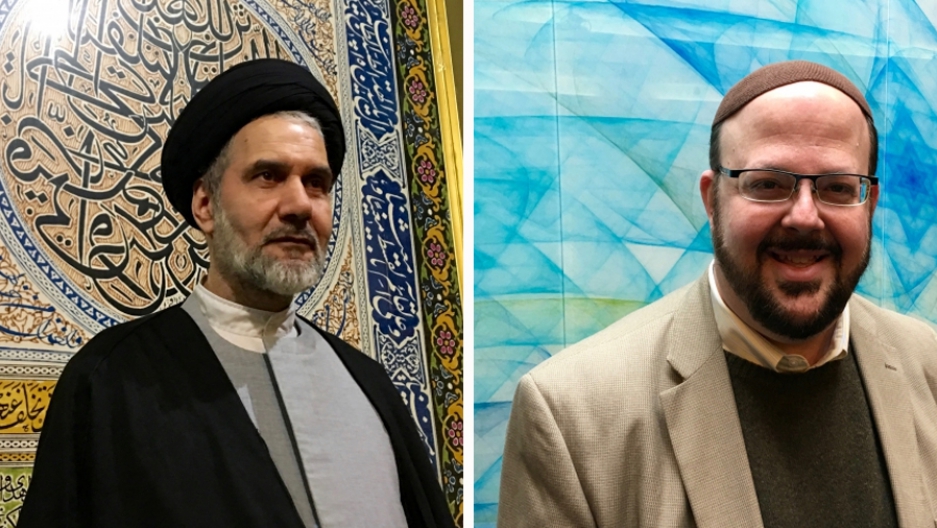 A sign in front of a green-domed Shiite mosque on a busy boulevard north of Toronto reads, “Walk with Israel — Stand with Israel.”

You read that right. A mosque.

It is not an act of vandalism. Nor is it evidence of Muslims-gone-Zionist. The sign is actually an ad for a fundraising event at the end of May, and it sits on the property of a synagogue just next to the mosque.

Viewed by passersby, the scene is at once a reminder of the difficult relationship between Jews and Muslims, and — at least here in suburban Canada — how religious leaders can take the initiative to overcome some of those difficulties.

Temple Har Zion was built on Bayview Avenue in the 1970s. Around the same time, a mosque was built right next door. For years, the head rabbi at the synagogue and the African-born imam from the mosque got along just fine.

About five years ago, the imam and the Muslim congregation from the mosque on Bayview moved to a bigger building. And a new group of Muslims announced they would be moving in beside Har Zion. Their spiritual leader is a grand ayatollah from the Islamic Republic of Iran. And that brought up some questions at the synagogue.

“It wasn’t anxiety,” says Rabbi Cory Weiss of Temple Har Zion. “We wondered, will the politics be different?”

Like the people who belong to the congregation at Har Zion, Weiss calls himself a proud Zionist who supports Israel. So the question on some people’s minds there: Would this new ayatollah in the neighborhood share the same loathing for the Jewish State as the clerics who rule Iran?

“With [the Muslim] community that was here before, they were East African, and so there wasn’t the Middle East politics to worry about,” Weiss says. “With the new community, we didn’t know what to expect. So, we actually tried to get together right away."

Leaders from the two religious centers met. Things were cordial. And they agreed to start working together on a shared issue that matters to people of all faiths: a lack of parking.

Standing in the parking lot between the synagogue and mosque buildings, Weiss explains that cooperation began by sharing calendars.

“It’s a way to see each other also, to just wave or wish each other a happy holiday or things like that.”

Weiss and his counterpart at the Imam Mahdi Islamic Center, the Grand Ayatollah Reza Hosseini Nassab, are getting more ambitious. They have teamed up to raise money for Syrian refugees planning to resettle in Canada, where private organizations were invited by the federal government to provide financial support to refugee families.

Sounding confident, Nassab says that members of the two congregations are on their way to raising more than $100,000. That’s enough to support four Syrian refugee families for a year.

Nassab was born in Iran and came to Canada about 25 years ago. Framing the issue in terms of his Muslim faith, he says Muslims have a religious duty to work for harmony in the country where they live.

“We have to cooperate with other religions, and followers of other religions, to make unity between the people in Canada, because we want the nation of Canada to be united and not to have the same problems that you can see in the Middle East,” Nassab says.

There are still worries about those problems showing up in a place like Canada. Most Iranians in the Toronto area, for example, are Shiite Muslims. And Imam Nassab says a few people at his mosque have raised concerns about helping people from war-torn Syria, when some of them might sympathize with the radical Sunni Muslim rebel groups that the Iranian-backed government in Damascus is fighting.

“[People from the mosque] know that there are fighters in Syria, ... [who] are related to al-Qaeda and ISIS and Nusra, and [that] they are very fanatic and very dangerous for all of the world, including for the Shia communities everywhere.”

Nonetheless, Nassab says he has faith in the Canadian government to keep dangerous people from entering Canada. At the same time, he says he tells people to recognize that there is a human catastrophe unfolding in that part of the world and that Muslims in Toronto and elsewhere need to do their part to help out.

That very same teaching is found in Jewish scripture. And it’s part of the theological basis for the partnership between Imam Nassab and Rabbi Weiss.

Last month, Nassab and Weiss took part in a public event at Temple Har Zion to announce their joint plan to raise funds for families from Syria. Weiss says it was a beautiful evening.

“There was a feeling in the air that we haven’t had in years, that we were going together to do something really important. And both the imam and I spoke about saving lives, that that’s what this is about. It was certainly one of my proudest moments as a rabbi and as a member of the Jewish community. And as a Canadian, because this is a very Canadian thing to do.”

Weiss says some members of his synagogue have also expressed concerns about the wisdom of welcoming thousands of Syrian refugees, many of whom have heard decades of anti-Israel propaganda at home.

“Look, we don’t pretend that Syrians have been brought up to love Jews. We know they haven’t, in general, because of Middle East politics,” he says.  “There are people who suggest to me that we shouldn’t be doing this. Because, why would you bring in people who hate you?”

Weiss goes on to answer that question by repeating that this effort is all about saving lives.

And, if there is an opportunity to turn some enemies of the Jewish people into friends, he says, that’s even better.