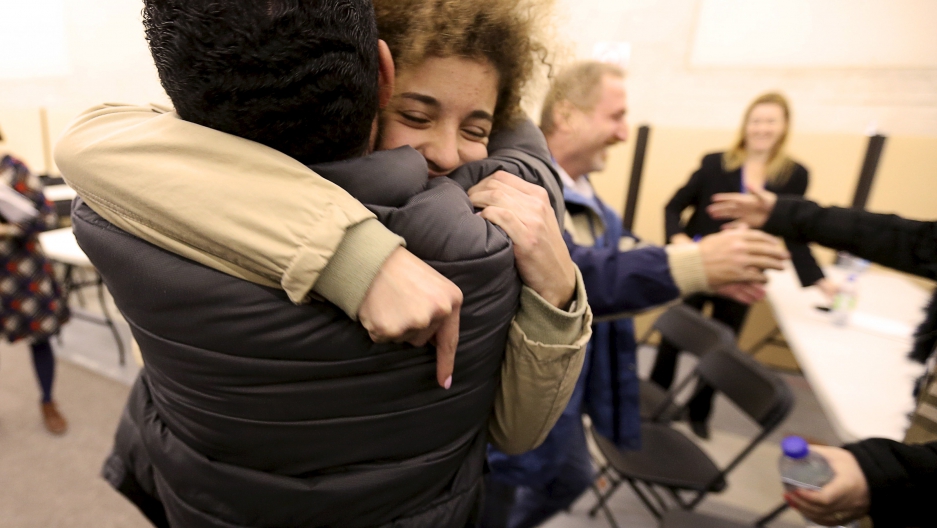 Anas Francis is reunited with his cousin Syrian refugee Laila Beylouneh, 13, at the Welcome Centre in Montreal, Quebec, December 12, 2015.

When it comes to welcoming refugees, Canada just does it better. But the US is taking steps to pick up the pace.

White House officials will be hard-pressed to meet their goal of letting in 10,000 new Syrian refugees by September, according to Becca Heller, the head of the International Refugee Assistance Project. She says the US program to vet Syrians has insufficient resources and isn't considered a top government priority.

"So far we're halfway through the fiscal year, and out of our goal of 10,000 Syrian refugees, we have admitted 1,285," she says. "So we're going to have to see the numbers pick up pretty significantly in order to actually make the 10,000 number by the time the fiscal year ends on September 30. Canada which is a country that's used to processing many fewer refugees than the United States was able to take in 25,000 people in four months."

Private sponsorships aside, the Canadian government processes 16,000 refugees — 400 percent of what the US has done, according to Heller.

Heller says her group has helped resettle thousands of refugees who are now thriving.

"Refugees are inherently survivors," she says. "They're people who have been through things we can't even imagine and have gotten themselves out of situations and into a neighboring country and they are fighting so hard to try to start better lives. We really owe them better than this."

Most of these refugees in the US have gone to states with already existing populations of Syrians, such as Michigan or California.

At a March 31 press briefing, State‎ Department spokesperson John Kirby reaffirmed the department’s intention to hit the 10,000 mark, but also stressed that it had to be done without compromising the vetting process. Refugees are subject to the most intense scrutiny of any travelers coming to the US.

According to figures posted on whitehouse.gov, less than 1 percent of refugees make it through an initial United Nations screening. They are then vetted by the US intelligence community — the FBI, Department of Homeland Security and State Department — in a process that can take up to two years.

“What we want to do is strike the right balance of meeting the goal that the president set — and we’re absolutely committed to that — and at the same time meeting our obligations to the safety and security of the American people and not changing or watering down or decreasing the level of scrutiny that refugees from Syria are put through before they come here to the United States,” Kirby said.

The president’s plan, which also called for an increase in the overall number of refugees accepted into the country from 70,000 to 85,000, has required the State Department and Homeland Security to ramp up capacity.

Much of this process is happening in Jordan, which last year was home to 664,102 refugees. About 79,900 were in the Zaatari refugee camp alone, according to figures from the United Nations. Since February, the State Department has sent additional staff tothe country to conduct and support interviews of up to 10,000 refugees who have already been screened by the UN, according to a statement from the State Department.

The department has also recently re-started refugee interviews in Beirut and launched interviews in Erbil, Iraq. It has also opened a “new pathway for certain Syrians with relatives in the United States to apply for refugee resettlement,” the statement says.

Fisher says many people don’t understand that Syrian refugees typically spend years in refugee camps before even being considered for resettlement in the US.

“It’s not like these people are coming straight from Syria. They are coming from places like Turkey, Jordan and Lebanon, where we actually have the ability to do refugee vetting, and where we have very good intelligence sharing. They are there for two, three, four years, and we know exactly who they are and what they are doing.”

Fisher has been working with refugee issues since 2009, and says experience has taught her what each new refugee arrival means.

“Any number of refugees who’s admitted is a chance for these individuals to build a future for themselves and for this country,” she says. “As an advocate, I get to know families. I’ve seen families in Jordan without access to plumbing, without access to education. People who are really eager to get to work and to contribute and to belong somewhere.”