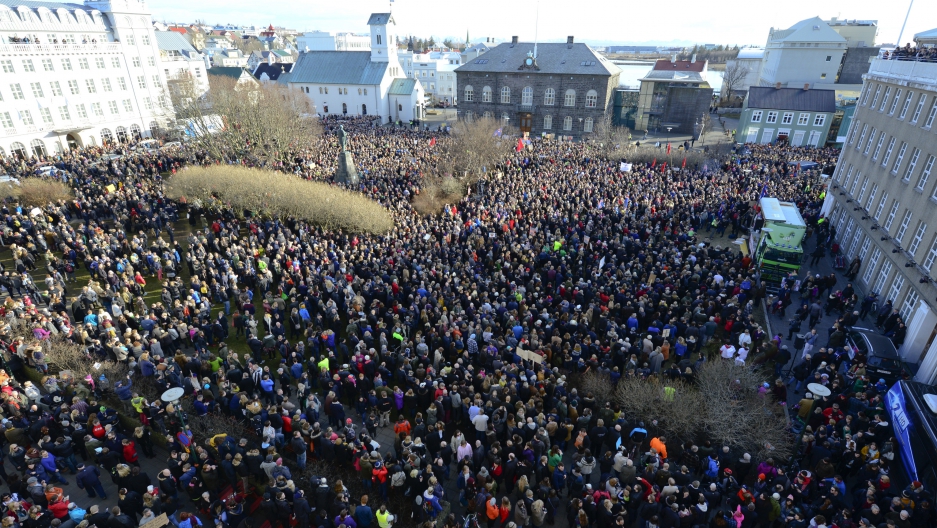 People demonstrate against Iceland's Prime Minister Sigmundur Gunnlaugsson in Reykjavik, Iceland on April 4, 2016 after a leak of documents by so-called Panama Papers stoked anger over his wife owning a tax haven-based company with large claims on the country's collapsed banks.

Prime Minister Sigmundur David Gunnlaugsson, who had been a cheerleader of Iceland's economy, quit on Tuesday after disclosures that his family had overseas banking accounts.

Gunnlaughsson resignation followed a massive leak of documents from a secretive law firm in Panama that showed how the world's rich hid billions in assets. Among those linked in the "Panama Papers" leaks are world leaders, oligarchs and parliamentarians.

The records from a Panamanian law firm show that Gunnlaugsson and his wife bought a company called Wintris Inc. in the British Virgin Islands in December 2007.

The company was intended to manage Gunnlaugsson's wife's inheritance from her businessman father, according to the AFP.

Gunnlaugsson, who repeatedly urged his people to keep their savings at home after Iceland's banking collapse, has insisted he never hid any money abroad. And he says his wife paid all her taxes on the company in Iceland.

“But the bigger question, really, is why (has) the prime minister … for years, been acting in contradiction to his own economic policies?” Reykjavik Grapevine news editor Paul Fontaine said in an interview Monday with PRI's The World. “And why did he keep all this to himself until he was forced to reveal his interests?”

After Iceland’s economic collapse, Gunnlaugsson touted the strength of the Icelandic krona and encouraged people to keep their money in the country to bolster the economy.

“The fact that he’s pretty much disregarded all of this in his personal financial dealings has made people absolutely furious,” Fontaine said.

Gunnlaugsson sold his stake in the offshore company to his wife in 2009 for one dollar.

According to Fontaine, that was just a day before a new law was passed that tightened vested interest reporting requirements for Icelandic parliamentarians.

“We have to realize that the reputation of the nation is at stake and we have more responsibility to save that, than to protect some people or some parties,” Arnason said. “It is about the greater good, not the interest of individuals.”

More than 25,000 Icelanders had signed a petition demanding Gunnlaugsson's resignation. That's about 1/12 the entire nation's population. Tens of thousands of people protested Monday night. Eggs were thrown as parliament's walls, as was expensive sour yogurt.

In all his years of covering the coalition government, Fontaine says, “I have never seen this type of groundswell of rage.”

Fontaine says many Icelanders hope the leaks call international attention to the fact that the country’s bounce back from the 2008 economic collapse has not been as smooth as many international observers assume.

“A lot of the major players, including our own elected officials, are still very much corrupt in unethical if not illegal economic practices,” Fontaine said. “I think there’s a hope amongst many Icelanders that the rest of the world ... pay attention, and that it helps put pressure upon this government to dissolve.”