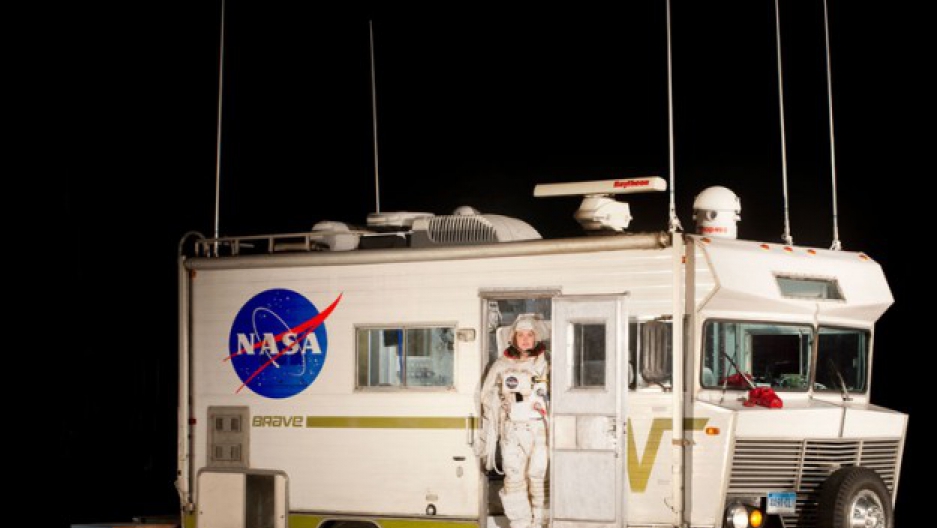 NASA is a fairly serious government agency tasked with such difficult feats of science as launching humans into outer space, and exploring the unknown reaches of the solar system.

For New York-based sculptor Tom Sachs, however, space exploration is a chance for satire, fun, DIY and a conversation about the similarities between art and science.

Sachs has been working on a homemade "space program" since 2007. One of many big differences between his program and NASA’s? Well, for starters, all the materials for Sachs’ space equipment comes from Home Depot.

Sachs’ first space installation took place at Manhattan’s Park Avenue Armory. It featured a journey to Mars and back in front of a live audience, and included a mission control, flight crew, landers and rovers.

During a recent conversation with Kevin Hand, deputy chief scientist at the Jet Propulsion Laboratory, Sachs’ tongue-in-cheek descriptions of his installation had the two men laughing for most of the talk.

Both Sachs and Hand agree that science and art have much in common.

“I just find a lot of inspiration scientifically in art,” Hand says. “Tom and I discovered we were kind of kindred spirits and he's sort of like my artistic alter-ego.”

Sachs compared creativity in science and in art to cooking with spices.

“Scientists and artists have kind of the same job,” Sachs says. “They have a gut feeling about something then they have to go out and prove it and bring it to the world. ... [They] all work hard to develop a constant flow of information, to prove their ideas and make sure that they'd work in real life. It starts with a gut feeling, an idea, a flash of inspiration and the rest is hard work. So when we say in the studio, ‘Creativity is the enemy,’ what we really mean is, you just need a little bit of chili pepper to flavor the whole stew. The rest is hard work and stirring it.”

Sachs’ installation can be viewed online, and in September he is planning another installation in San Francisco. Instead of a journey to Mars, however, he and his studio mates will be focused on the icy moon, Europa.