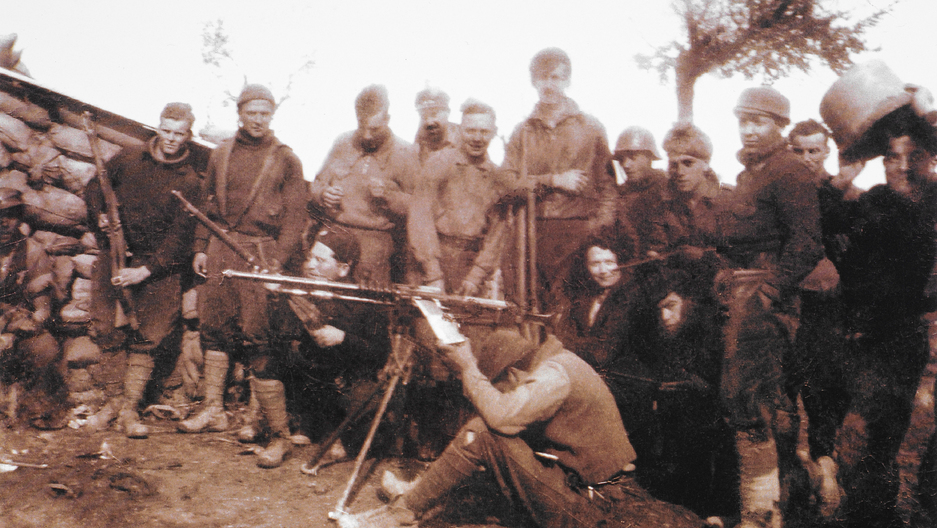 George Orwell (tall, center) and his wife, Eileen, on the day she visited his unit on the front.

It was illegal to fight in somebody else’s war.

Yet something compelled nearly 3,000 young Americans to cross the Atlantic and take up arms in Spain in the late 1930s. Some 700 of the young idealists, known as the Abraham Lincoln Brigade, died in a battle that pitted communism against fascism.

Author Adam Hochschild tells their stories in his new book, Spain in Our Hearts: Americans in the Spanish Civil War, 1936-1939.

Hochschild says most of the starry-eyed volunteers saw Spain’s conflict as the first battle in a world war to come — a battle as much against Adolf Hitler as against Francisco Franco. And, he says, about one-third to one-half of the volunteers were Jewish.

Among the Americans who made their way to Spain were a young American couple, Lois and Charles Orr. They'd been traveling in France when the revolution broke out, hitchhiked to the Spanish border and crossed over and made their way to Barcelona, where they lived and worked in what became an incredible social revolution.

"When Franco's coup of 1936 happened and these generals who called themselves nationalists tried to seize the whole country, in much of Spain, especially in the northeast, they were beaten back not by the Spanish Republic's ragtag army, but by hastily organized, badly equipped militias organized by left-wing political parties and trade unions," Hochschild says. "After turning back the coup in these portions of Spain, these workers' militias found themselves in control of large swaths of the country."

"They were excited that here was a revolution that seemed to be bubbling from the ground up, and not imposed from the top down as had happened in the Soviet Union," Hochschild says. "They hung out with other foreign idealists in Barcelona who had come there to work for this revolution."

Lois Orr described living in a hotel where food and drink was provided for free to foreigners who'd come to help out in the revolution. Wine that had been seized from the rich was provided at no charge, thanks to the anarchist ideas that dominated the coalition of workers.

Of course, the revolution was not totally idyllic. In fact, both sides were responsible for gross violations of human rights, including ruthless murders. The revolutionaries are believed to have killed about 150,000 civilians during the civil war and another 20,000 later. And the Spanish republic was linked with the deaths of about 50,000 people, mostly by mobs of vigilantes.

"Lois and Charles Orr seemed only dimly, at best, aware of this. Most of the killing had stopped by the time they got there, but it was still a bloody background to this time period," Hochschild says.

Eventually, though, the workers' revolution petered out when disagreement over tactics led to a split and the ascendency of mainstream communist ideology. Orr and other foreign supporters were arrested and eventually made to leave the country.

The outpouring of foreign support to aid in Spain's civil war certainly bears hallmarks of today's conflict in Syria and Iraq — but Hochschild thinks the roots go far further into history. The American Revolution, for example, was won with considerable help from the French. People from England and elsewhere went to Greece in the early 1800s to help fight for independence.

"Throughout history, people have been going places to fight for religious or political causes they believe in," Hochschild adds. "Looking back after many decades, it's a little easier for us to pass judgment on whether those causes were worth fighting for."