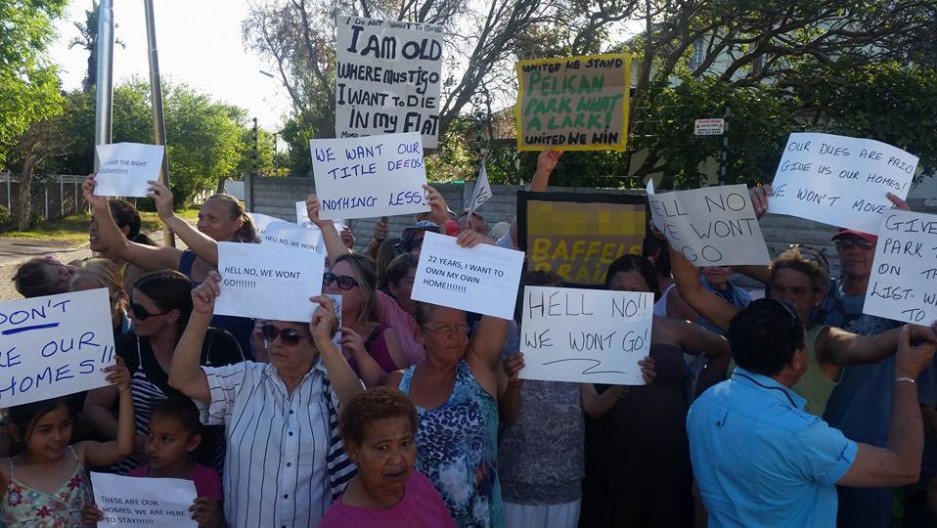 Residents at Naruna Estates say they're being forced out of their homes in an echo of an apartheid-era policy. The government says not at all — they're just not paying their rent.

At 64, Rose Saligee is a survivor.

Saligee is mixed race (or what’s known as colored in South Africa). When she was 14, the country’s white minority government kicked her and her family out of the house she was born in, and herded her, along with other people of color, into a ghetto on the outskirts of Cape Town. Saligee recalls watching trucks carting away people, furniture and clothing.

“You first get told you can no longer live here because it’s been declared a white area. And if you refuse to go, they just took your belongings and put them on the pavement,” Saligee recalls.

Throughout Saligee’s adult life, she was bumped from one township to the next — until about 20 years ago, when she became the first person of color allowed to move into a whites-only area of Cape Town.

“I remember it so clearly,” Saligee says. She was listening to the radio when she heard an announcement she can still intone word for word: “Irrespective of color or creed, you shall not be refused a state house,” she says in an announcer voice.

“That was a Wednesday. I couldn’t wait for Thursday morning to come.”

On Thursday, Saligee woke up early and went down to the housing office to fill out an application. She says the staff looked at her like she was nuts.

“The ladies asked me, ‘you know you are a colored? Why are you applying for a house here?’” Saligee’s face grew determined. “So I said, ‘who are you to tell me that I cannot rent a state house when last night the announcement was made that anyone of color could apply?”’

This was 1994, the year apartheid ended. Saligee says she remembers voting for the first time in April, and then moving into her new neighborhood, Naruna Estates, on September 1.

Many of the houses there, including Saligee’s, are owned by the government and rented out to poor families for low rents. The neighborhood is orders of magnitude nicer than the townships Saligee was banished to as a child. There are playgrounds and trees here; train stations, schools and supermarkets are close by.

But now, Saligee and about 100 other families are at risk of being evicted. The government says it has to raise the rent.

Bonginkosi Madikizela, the provincial housing minister, says the families won’t be homeless. “Instead of chucking them on the streets we are saying, ‘look, given […] that you can no longer afford to pay, we are going to give you an alternative accommodation.”

The “alternative accommodation” is on the outskirts of the Cape Town, in the areas that black people had to live in before 1994.

Madikizela says the government has no choice; Naruna is too expensive to keep up and people haven’t been paying the rent.

“If you can’t pay and refuse alternative accommodation ... then we have no option,” he says. “Obviously the last resort is for you to vacate the property. That’s how it is all over.”

But what’s different here is the government appears to be reverting to an apartheid-era legacy.

When Cape Town was built, it was conceived as a whites-only city center surrounded by settlements for black laborers. To this day, most of the poor live in peripheral townships while the wealthier white minority continues to live in the city center.

Naruna Estates was one of the exceptions.

Saligee admits she’s behind on her rent. Still, for her, this feels like apartheid all over again.

“As a person of color, you were removed from places to the outskirts and in this day in age, they’re doing it again. They’re just doing it again in a different way,” she says.

Madikizela bristles at being likened to the apartheid government. He calls the analogy an attempt by those who are behind on their rent to spread lies about the government. “In order for them not to be evicted, they are coming up with this narrative and portraying us in government as monsters. ... It’s not true,” he says.

For now, Saligee is refusing to leave. It’s not just the trauma of relocation, she says.

The house itself is packed with memories. It symbolizes for her the end of apartheid, and the beginning of freedom.