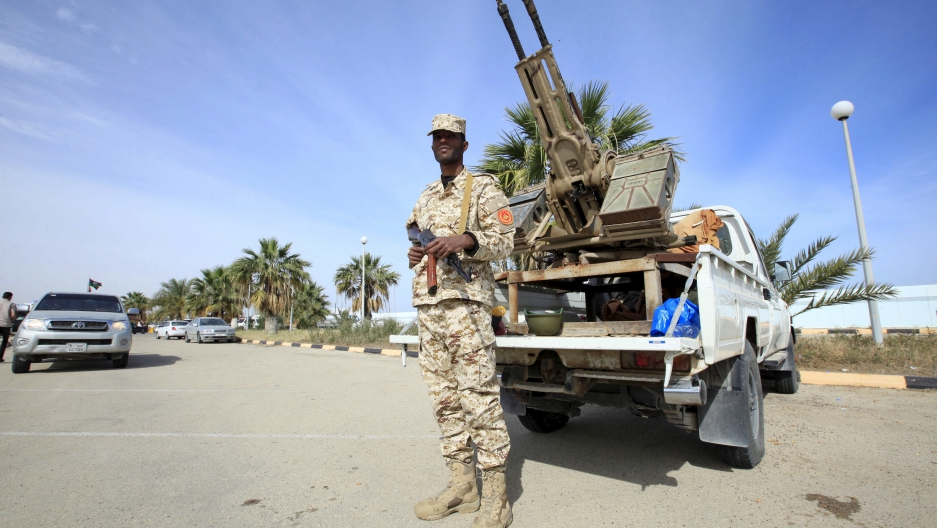 A member of the force assigned to protect Libya's unity government stands on a road leading to new authority's offices in Tripoli, Libya on March 31.
Credit:
Ismail Zitouny/Reuters
Share

Libya’s new "unity government" arrived in the country this week aiming to bring together warring factions.

The product of United Nations-brokered peace talks that concluded late last year, its nine members led by Prime Minister-designate Fayez al-Sarraj had been tasked with heading to Tripoli and taking control of state institutions.

But they made an inauspicious start. The powerful militias that have come to rule the city in recent years warned them to stay away, and the capital’s airspace was closed. So, the would-be rulers of Libya were forced to travel by boat.

The ordeal of reaching the city from which they plan to govern pales in comparison to the task they face now that they've arrived. Since the overthrow of former Libyan President Muammar Gaddafi in 2011, the country has been beset by chaos and conflict.

At the time the Government of National Accord (GNA) pulled into port, Libya was ruled by two rival parliaments: the Islamist-dominated National Salvation government in Tripoli, and an internationally recognized parliament based in Tobruk, in the east.

Fighting between the two sides has paralyzed the country, and allowed for the entry of the self-proclaimed Islamic State (ISIS) into the vacuum. Western officials estimate the number of ISIS fighters in Libya to be as many as 6,000, according to Reuters.

The peace deal signed in December 2015 was supposed to see the rival parliaments cede power to the new government, led by Sarraj. But both administrations view the new government with suspicion, and appear unwilling to hand over the reins.

Speaking before the GNA’s arrival, Khalifa al-Ghawi, the leader of the Tripoli-based parliament, described the unity government as “illegitimate infiltrators” and called on them to “hand themselves over and be in safe hands, or to go back to where they came from.”

Effectively, Libya now has three governments, none of which are able to govern.

The cool reception Sarraj received could be a harbinger of things to come. While he and his deputies have some support from a number of militias, the patchwork of armed groups and allegiances that arose out of the Libyan revolution will make it difficult for any central power to rein them in.

“The GNA has the backing of some of Misratah’s more powerful militias, and various municipalities in the west and east. These are the groups that will be crucial for securing its position in Tripoli,” said Richard Cochrane, senior analyst at consultancy firm IHS Country Risk.

“As it stands, the GNA doesn’t have enough armed support to militarily assert its control over the country — even if it did have the backing of sufficient militias, it would have the same issue as previous governments in that those militias would be primarily loyal to their own commanders, rather than any civilian authority. Even in a best-case scenario, building sufficient capacity in the security forces to displace the militias is a process that will take several years.”

On Wednesday evening, gunfire was reported across the capital. Some are warning of another round of fighting if militias there can’t come to an agreement.

The next few weeks will be crucial in deciding Libya’s fate. The unity government is seen as the international community’s best hope of resolving the five-year-long conflict, and of dealing with the growing threat of ISIS, which has sought to expand its influence in the country as it comes under pressure in its strongholds in Syria and Iraq.

ISIS’s rise has given the international community fresh impetus to bring about peace in Libya, but it is by far not the only threat facing the country.

“Libya is facing a profound fiscal crisis that looks likely to leave the state bankrupt within a few years. Without a functional oil sector providing a consistent revenue stream to buy the support of Libya’s various groups to facilitate a stable transition phase, even a committed and competent government would struggle to extend its authority,” said Cochrane.