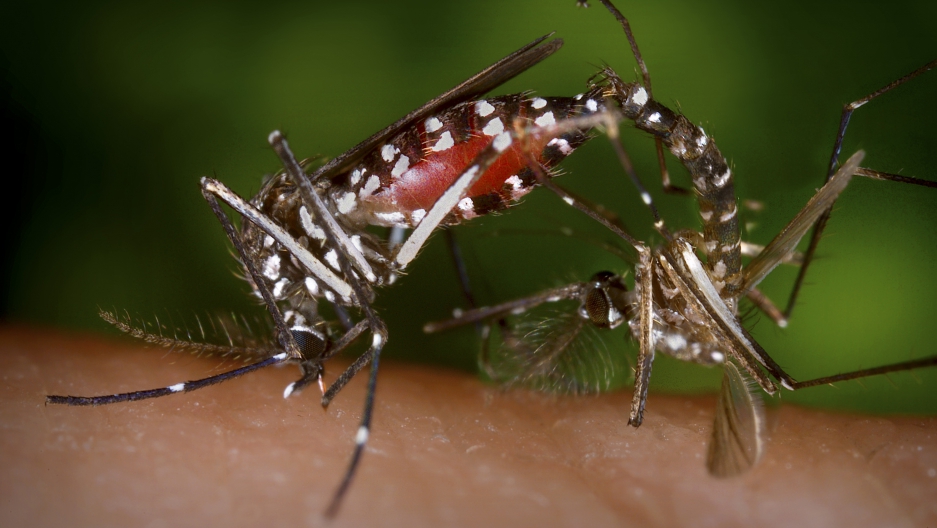 A pair of Aedes albopictus mosquitoes are seen during a mating ritual while the female feeds on a blood meal in a 2003 image from the Centers for Disease Control (CDC).

In the next few months, a genetically modified mosquito may be heard buzzing around the Florida Keys. The US Food and Drug Administration recently granted preliminary approval to release OX513A, designed by Oxitec, to fight the spread of mosquito-borne diseases, including Zika, dengue, yellow fever and others.

The modified insects known as OX513A represent the latest attempt to eradicate the disease-spreading species of mosquitoes. The data for doing so is staggering: More than 1 million people die of malaria every year; over the course of human history, mosquitoes have killed more people than all armed conflicts and wars combined.

And with new fears about the Zika virus, both public and scientific sentiment is seemingly in favor of a mass, forced mosquito extinction. But not everyone agrees that's a good idea.

Oxitec's OX513A is a genetically modified male Aedes aegypti mosquito. In its modified form, the insect transmits a lethal gene to its offspring, killing them while they are still in their larval stage. Over time, the entire Aedes aegypti species would be wiped out.

Oxitec is already testing OX513A in Malaysia, Brazil and Grand Cayman. It is currently applying to test in the Florida Keys community of Key Haven, which has fewer than 500 homes and would be the first trial in the United States. The FDA recently released its environmental impact study, which found that OX513A would pose no significant threat to the environment. The proposal is now in a public comment period before a final decision is made.

E.O. Wilson is an evolutionary biologist, a champion of biodiversity and probably the most well-known entomologist in the world. His latest book, "Half Earth," is a passionate plea to save humanity by dedicating half the planet to nature.

But even that half is not big enough to hold the Anopheles mosquito, 41 species of which carry malaria. According to Wilson, he would "gladly throw the switch and be the executioner myself."

While that might seem surprising to hear from a biologist and advocate of natural biodiversity, Wilson's reasoning is both scientific, and, he said, moral. The Anopheles mosquitoes have co-evolved with humans and have specialized to live in human settlements and use only human blood, especially in Africa — making them the principle carrier of malaria.

Wilson said, "I believe it's just common sense. It's morality with a strong scientific basis that needs to be considered." Still, he believes that the removal of a species from the earth should be "highly informed and surgical."

It's Not Insects, It's Infrastructure

But not all agree.

Sonia Shah claims that bioengineering a species-specific die-off is not only environmentally risky, it's also completely unnecessary. Shah is a science journalist who writes about pandemics and pathogens and the social history of disease, including the critically celebrated history of malaria, "The Fever." Although she recognizes the major scientific and medical threat malaria poses, she says that the disease also has an important economic aspect.

"If you're poor, you are more likely to get malaria," she said, because your house doesn't have screens or windows and is more likely to be close to poorly drained land. Malaria is more likely to affect people without electricity who spend more time outdoors, and people who can't afford repellent.

Shah thinks the solution to malaria comes from solving these social and structural problems — not from engineering mosquitoes to die. She points to the United States, which had a serious malaria problem but now has been virtually malaria free for the last 100 years. Shah says that this happened not because the government attacked mosquitoes, but because they attacked bad roads, bad houses, bad drainage and the lack of electricity. In other words, by attacking poverty, the US, by accident, conquered malaria.

Entomologist Jeffrey Lockwood says our desire to eradicate mosquitoes is not medical, but psychological. In fact, he thinks it goes beyond annoyance or fear into a kind of collective phobia. "Psychologists define a phobia as a persistent, excessive, and unreasonable fear," he said. "A desire to wipe out an entire species might qualify."

Lockwood is afraid of the scientific ramifications that this phobia could cause if it propels the extinction of certain, if not all, mosquitoes. He believes this may have disastrous ecological consequences, but also believes it sets a very dangerous precedent.

"If we do this," he asked, "how do we know what the next target is? Is it cockroaches? Should it be rats? Once we begin down this path, how do we know which organism warrants extinction next? When do we stop?"

This story is part of a series on mosquitoes from To The Best of Our Knowledge.  Subscribe to the TTBOOK podcast.