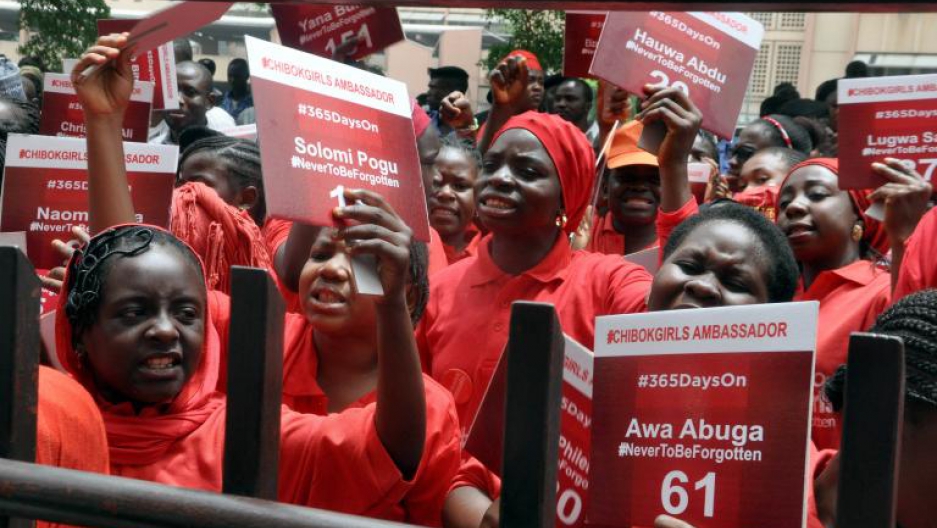 Children under the auspices of Chibok Girls Ambassadors march to press for the release of 219 schoolgirls abducted by Boko Haram Islamists during a demonstration at ministry of education in Abuja, on April 14, 2015.

JOHANNESBURG, South Africa — A year ago, Boko Haram militants kidnapped at least 300 children from the town of Damasak in Nigeria's remote northeast.

They are still missing. But few have even heard about their abduction.

These aren’t the schoolgirls from Chibok, who were kidnapped in April 2014. Of those 276 girls, 219 are still being held captive despite international attention and a continuing campaign by Nigerian activists under the #BringBackOurGirls hashtag.

The schoolchildren from Damasak were taken by Boko Haram militants in March 2015 along with an estimated 100 women and other children. After initial reports trickled out about their abduction, the Nigerian government denied it had happened.

With no journalists in the area due to security issues, and poor infrastructure hampering any communication, little more was heard.

But according to Human Rights Watch (HRW), which has interviewed witnesses, this was the largest documented school abduction by the Islamist militant group.

“Three hundred children have been missing for a year, and yet there has been not a word from the Nigerian government,” said Mausi Segun, Nigeria researcher for the organization, in a report released this week.

“The authorities need to wake up and find out where the Damasak children and other captives are and take urgent steps to free them,” she said.

According to HRW, Boko Haram fighters attacked Damasak, a trading town in Borno state near the border with Niger, on Nov. 24, 2014, blocking roads and trapping residents.

Witnesses told HRW that insurgents took over the Zanna Mobarti Primary School, locking inside more than 300 students between the ages of 7 and 17. They used the school as a base, bringing in other women and children abducted from the town.

When troops from neighboring Chad and Niger advanced on Damasak in mid-March 2015, as part of a cross-border military operation with Nigeria, the insurgents fled, taking with them the 300 children and about 100 other women and children who had been brought to the school.

At the time, the Nigerian government’s national information center denied reports of the abduction, saying in statement that, “there is no fresh abduction in Damasak.” The government hasn't responded to the latest report.

But the harrowing testimony of witnesses tells a disturbing story.

While in control of the school, the militants are said to have separated the women from the children, and the girls from the boys. The captives were forced to learn the Quran. Some died in captivity from rotten food that caused vomiting and diarrhea.

A teacher told HRW: “I was held captive by [Boko Haram] for at least six days. … Corpses were on the street. They forced us to carry [the corpses] and go and dispose of them in the river and there is nothing one could do about it.”

At least 470 civilians were killed during Boko Haram's occupation of Damasak, based on counts of bodies found in a river, on the streets and in shallow graves.

None of the 400 women and children taken from the town are known to have been rescued. The Nigerian military has also failed to rescue any of the Chibok girls (57 of them managed to escape).

According to a 2015 report by Amnesty International, more than 2,000 girls and women had been kidnapped by Boko Haram since the start of 2014, many of them forced to become fighters and sex slaves. There are also fears that some of the girls have become suicide bombers.