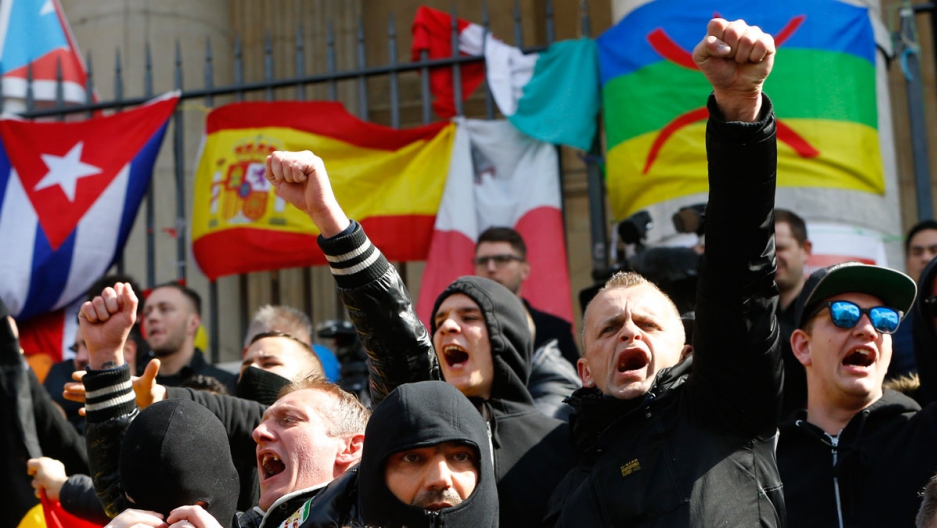 Right-wing demonstrators protest against terrorism in front of the old stock exchange in Brussels, Belgium, March 27. 2016.

Using Google Trends, a tool that measures the search interest of Google users on specific words or phrases, PRI has found that searches for four popular anti-Muslim phrases — "kill Muslims," "Muslims are terrorists," "hate Muslims" and "stop Islam" — have increased since the terrorist attack in San Bernardino, California in December.

"Stop Islam" was the most searched phrase among them. The hashtag #StopIslam was also trending on Twitter soon after the Brussels attacks.

The chart below shows the search interest of each phrase from March 1 to 27.

To understand the chart, one has to understand how Google Trends work. It does not provide absolute search volume, i.e., how many times a word has been searched by its users. It shows the search interest in numbers relative to the highest point in the chart. The numbers range from 0 to 100.

Another interesting finding is that the search interest for "Vlaams Belang", a right-wing nationalist Belgian party demonstrates the same trend of anti-Muslim searches (click the "next" button in the first chart to see the trend line).

It has been part of ISIS's strategy to generate hostility between Muslims living in the West and their fellow citizens through terrorist attacks. According to The Intercept, the group published a statement saying its attack on the office of French satirical magazine Charlie Hebdo in January 2015 was to further polarize the society.

Aiming to eliminate the "gray zone," which is the coexistence between religious groups, ISIS said the heightened distrust and hostility would force Muslims in Western nations to choose a side and migrate to its territory.

Back to the anti-Muslim search phrases, who searched for them?

To answer this question, we focused on the search data for the phrase "kill Muslims" from March 22 to March 28, the seven-day period after the searches spiked. Most of the searches during that period came from users in eight countries as shown in the following chart.

Clearly the attacks in Brussels have angered many people in Australia, the US, the UK and Canada.

Although the search interest for "kill Muslims" was relatively low in Belgium, it may not reflect the real situation as the main languages used in Belgium are French and Dutch. However, when we checked the search interest of all four phrases in both Dutch and French, Google Trends could not pick up any data as the search volume was too small, probably due to the relatively small number of Dutch and French speaking users. (Note: the phrase 'stop Islam' is the same in both English and Dutch.)

The spike in anti-Muslim searches is not a new phenomenon.

The highest surge was seen after the Paris attacks on November 13, and another rise was recorded after the San Bernardino attack.

A New York Times report published last December found a direct correlation between anti-Muslim searches and anti-Muslim hate crimes in the US. The report said that when Islamophobic searches are at their highest levels, such as during the controversy over the New York's "ground zero mosque" in 2010 or on the 9/11 anniversary, hate crimes would be at their highest levels, too.

This observation was evident in London, too, after the Paris attacks. According to a BBC report, hate crimes against Muslims in London tripled since the attacks, increasing from 24 incidents in the week prior to the attacks to 76 two weeks after.

It is still too early to say whether such a trend reemerged after the Brussels attacks, but right-wing political parties in Europe have started to point their fingers at Islam.