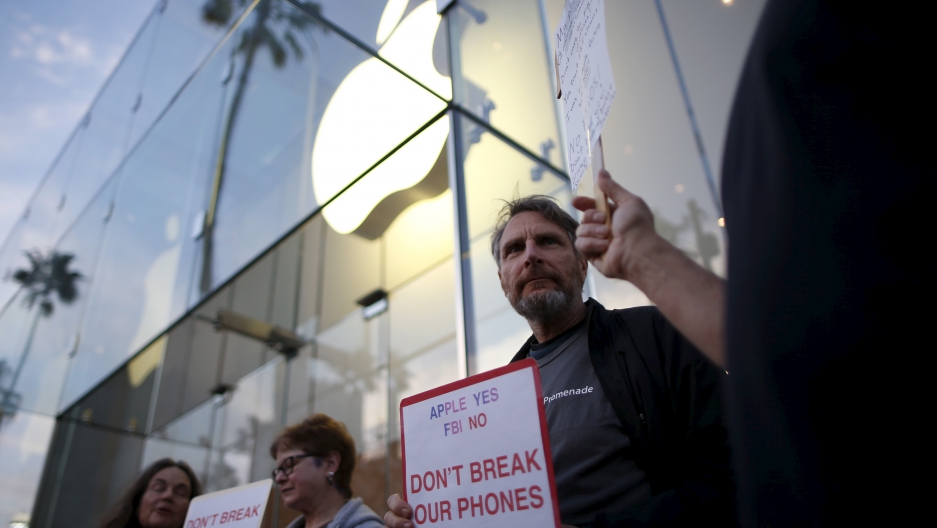 Protestors gathered at a small rally in support of Apple's refusal to help the FBI access the cell phone of a gunman involved in the killings of 14 people in San Bernardino, California in February.

Apple refused. The Feds sued. And now the FBI has managed to get into the phone, possibly with help from an Israeli digital forensics company.

David Sanger, the National Security correspondent for the New York Times, says it's possible that an Israel-based company called Cellebrite assisted the FBI.

"On the day the FBI said it had an alternative, if you dug deeply into the announcements that the General Services Administration puts out about contracts that they have recently let, Cellebrite got a very small one with the FBI for help in unspecified computer programming issues," he says.

Cellebrite has not acknowledged having a contract to unlock the San Bernardino iPhone, and it certainly has not offered any details regarding how it might be hacked. The cellphone is owned by San Bernardino County Department of Public Health, where Farook worked as a health inspector.

"We suspect ... it would be going into the hardware of the iPhone itself, and burrowing down to some glue that covers certain chips and getting at a certain code that might allow them to unlock the physical memory of the chip," according to Sanger.

The US government argued for months that it could not access the data on the iPhone without Apple's assistance. Now that it has accomplished that task, there's much speculation about the original intent of US officials.

"One possibility is that the FBI seized on the moment of the San Bernardino attacks, and the horror of that to set a precedent in a pretty compelling case for why it is that you need to be able to get inside cell phones," Sanger says, adding that perhaps officials "thought that they would build up a lot of support for that. They did build up a fair bit of support, but they also built up and ran into an unprecedented amount of public opposition bolstered and fuelled by Apple."

Sanger suggests it's also possible that FBI officials began to worry that they might lose their own case and decided to back off.

"Apple will spend a lot time trying to figure out how they got into this phone, because clearly Apple is sort of duty-bound to its users to go figure out what this flaw was and cure it," he adds.

Cellebrite's possible role is just one sign that Israeli officials are working to improve their country's already competitive high-tech landscape. He credits in part a military intelligence corps called Unit 8200, that includes "some of the best and brightest" of Israelis completing their military service.

"You'll see start-ups in Israel all around the Unit 8200 alumni," he says. "They're now actually building a campus for many of these start-ups outside of Tel Aviv. And so a lot of these companies are spinoffs of one of the premier surveillance and cyber intelligence agencies."