A flint arrowhead embedded a full inch into an upper arm bone. This was the first find at the site.

A deadly wave of arrows fell from the sky, opening the battle. Men screamed and fell, as the flint and bronze arrowheads struck deep into their bones. Some slipped from the bridge and sank beneath the river.

Out of the mist, a wave of armored warriors — some on horseback — charged at their enemies, defending the ancient wood and stone causeway across the boggy valley.

Warrior bands had come from all over Europe, some of them from hundreds of miles away, and the campaign had brought them here, on this day, to fight to the death, for possession of this causeway. Now, thousands clashed. Hundreds would die.

The two sides rained blows on each with wooden clubs and bronze swords, or stabbed with spears, tipped with flint or brass.

One spearman thrust his weapon into the horse carrying a nobleman, sending horse and rider crashing off the bridge into the cold gray water.

Finally, one side broke, and the losing warriors were chased down and cut down from behind.

When the fighting was done, some men lay where they fell, only to be stripped of their clothes, weapons and valuables. Their mangled, naked bodies were tossed into the river. Others sank, untouched, into the river, or into the mud along the riverbanks.

This is the story pieced together by archaeologists, working on what might be the oldest known battlefield in the world, and their findings are shaking up everything that is known about society and warfare in Bronze Age Europe. The story is told in depth in the latest edition of Science Magazine.

The battlefield is located on the Tollense River, near the coast of the Baltic Sea in Germany, due north of Berlin. The fight took place in approximately 1250 BC, about 3265 years ago. That’s a time of legends — roughly a half-century before Achilles is said to have fought in the siege of Troy.

The ancient texts of India, China and the Middle East contain stories of battles in this period. Some are almost mythical, with gods and godlike men taking part. But no physical evidence has been discovered to provide archaeologists with anything to substantiate these stories. That’s largely because of climate and time.

But the bogs of north Germany appear to have been perfect for preserving the bones of men and horses, and their arms, armor and personal possessions.

Only one small portion of the site has been excavated, between 2009 and 2015, and already 130 individual corpses have been identified. Mostly they are young men, and all show signs of violent trauma. Given the extent of the area, archaeologists estimate a possible body count of 750. In turn that suggests maybe 4,000 warriors took part in the action. 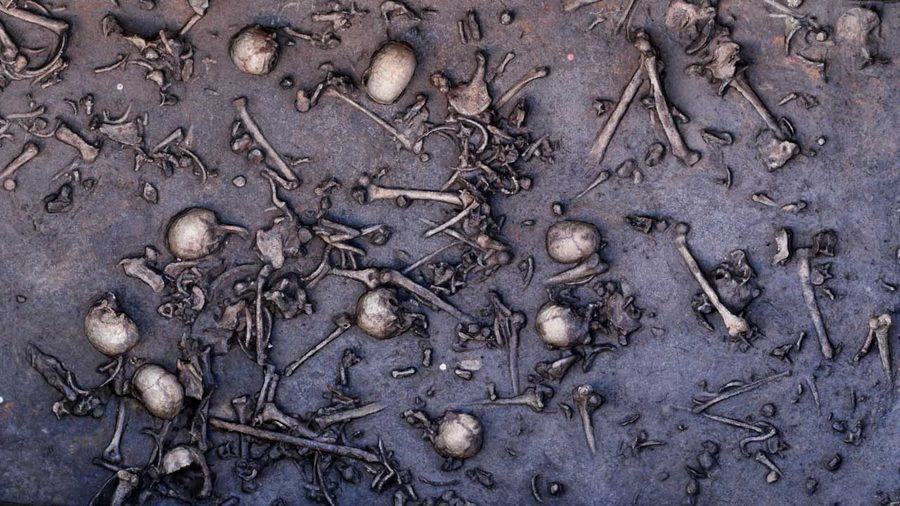 The scale of the conflict has surprised historians and archaeologists. Previously it had been widely accepted that warfare at this time in northern Europe was confined to small scale raids for necessities like food. But this discovery indicates a much larger scale of organization.

Writing did not arrive in this part of Europe for another 2,000 years, so it’s a mystery as to who was fighting whom. A full DNA analysis has yet to be completed, but evidence from teeth indicates that this was no local struggle. Instead, the chemical composition of the teeth show that the men came from many different parts of Europe, some from hundreds of miles away.

One hypothesis suggests that bands of warriors were brought together for a common purpose, in the same way warbands came together in the story of siege of Troy.

But what’s really startling historians is that nobody knew North European society was this organized, stratified and warlike so early in history. One researcher told Science magazine “if you fight with body armor and helmet and corselet, you need daily training or you can’t move. … This kind of training is the beginning of a specialized group of warriors.”

An elite warrior class can only exist if someone else is growing the warriors' food and making their weapons and tools. That suggests a degree of hitherto unsuspected stratification of Bronze Age society.