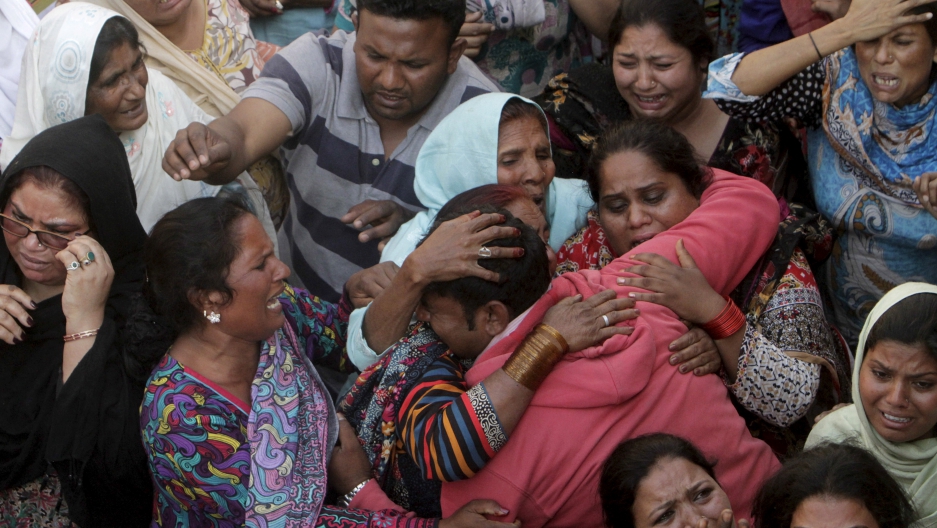 Family members mourn a relative who was killed in a blast outside a public park on Sunday, during a funeral in Lahore, Pakistan, March 28, 2016.
Credit: Mohsin Raza
Share

The worst fears of Pakistan's Christians came true with the carnage in Lahore on Easter Sunday, said activists who had braced for a backlash since thousands took to the streets over the execution of a murderer feted as an Islamist hero.

Taliban militants said they were targeting Christians with the suicide bombing which killed at least 72 people, nearly half of them children, in a crowded park in Lahore as thousands marked Easter on a warm spring evening.

Christian leaders said they had been filled with foreboding ever since the government executed Mumtaz Qadri, who murdered a liberal governor calling for reform of the country's blasphemy laws.

Their fears grew when Islamists announced on Friday that they would hold prayers for Qadri over the Easter weekend, four weeks after his hanging.

"The Christian community had the feeling that there would be backlash from Qadri's execution, especially on festivals like Easter," said Shamoon Gill, a Christian activist and spokesman for the All Pakistan Minorities Alliance.

The Taliban did not mention Qadri in their claim of responsibility.

But the attack came as thousands of his supporters clashed with police in Islamabad, several hundred kilometres away, with activists attacking the government's apparent tolerance of the demonstrators.

"People are calling for an assassin to be declared a hero and the government is giving them space," said Cecil Shane Chaudhry, executive director of the National Commission for Justice and Peace, a Christian NGO.

Sunday's blast was the latest in the "long history of persecution of Christians in the country", leading human rights activist Hussain Naqi told AFP Monday.

In Rome, Pope Francis appealed to Pakistani authorities to step up security for religious minorities after the "abhorrent" suicide bombing.

Christians are frequently the target of militant attacks, including a double suicide bombing that killed 82 people at a church service in Pakistan's northwestern city of Peshawar in 2013.

They also often face discrimination at work and routinely fall victim to the blasphemy laws, which rights groups say are often used to wage personal vendettas.

Blasphemy can carry the death penalty in Pakistan and is a hugely sensitive issue in the Muslim nation of around 200 million.

Even unproven allegations can stir mob violence. Christians, who make up 1.6 percent of the population, are often the target.

"We are teaching our kids a distorted, rather false history where the mullah is pious and the minorities are evil, and this is a very dangerous trend," Naqi said.

"It's not only with Christians, we are doing the same with Hindus and Ahmadis and that's why they take every possible step -- either legal or illegal -- to leave the country."

"There is a growing sense of insecurity among minorities in Pakistan, and whoever is not a Muslim is not safe in this country," he said.

Activists pointed to officials who appeared to dismiss the militants' statement they were targeting Christians, accusing them of downplaying the threat.

"The target was not the Christian community in particular," senior police official Haider Ashraf told AFP Monday despite the Taliban statement, adding that Muslims were among the dead.

Naqi branded the statement a "cover-up" and said the government was in denial, "trying to downplay the incident to hide its own failure at protecting Christians and minorities".

On Monday around 3,000 of Qadri's supporters were still holding a sit-in near main government buildings in Islamabad.

Their demands include the execution of Asia Bibi, a Christian mother-of-five who has been on death row since she was convicted of blasphemy in 2010.

They are also calling for Qadri to be officially declared a martyr and want the immediate imposition of Sharia Islamic law.