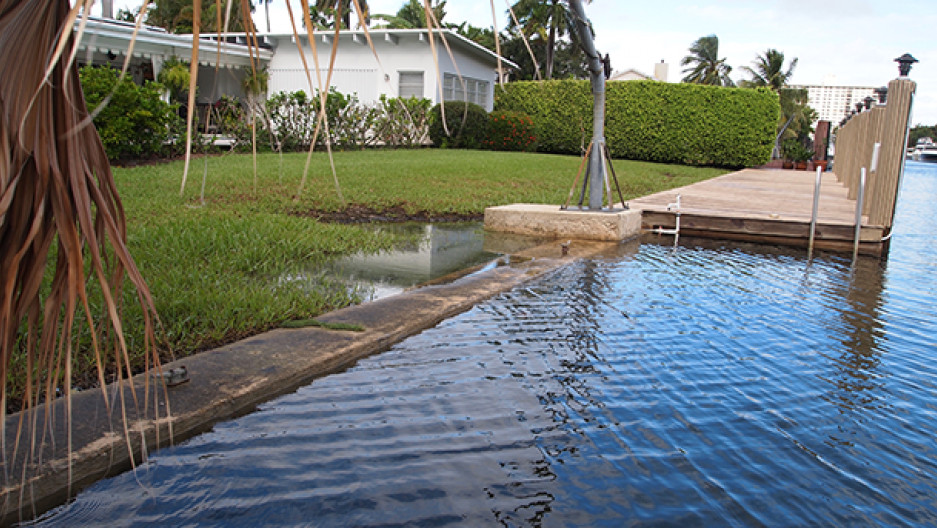 Canal water spilled over a seawall into a Fort Lauderdale backyard during a recent King Tide event.

Sea level rise is one of the most obvious and ominous effects of global warming, which makes living in low-lying coastal areas increasingly risky. Yet some of the very places that will be most affected by rising seas are undergoing real estate booms.

One of them is the city of Fort Lauderdale, in south Florida.

“It has 165 miles of canals that wind its way through the innards of most parts of the city,” Bagley explains. “And like most of South Florida, it sits on top of a limestone bedrock, which is very porous. [So] when sea levels rise, they not only creep over sea walls, they also actually creep through the underlying bedrock of the city. Water will creep under homes and into streets. It affects almost every part of the city. The water is really the heart and soul of Fort Lauderdale and it could be its downfall in the end, unfortunately.”

“Streets flood, yards flood, critical infrastructure is at risk,” Bagley says. “[Global average] sea levels have risen 8 inches in the last 100 years, and the King Tide is 18 inches on top of that — so it's getting worse and worse every year.”

Nevertheless, Fort Lauderdale is experiencing a massive building boom — skyscrapers, new condos, new apartment buildings. According to the Fort Lauderdale Chamber of Commerce, the city expects to add about 50,000 people in the next 15 years and it currently lacks housing to accommodate this influx.

Construction codes in the city require that all buildings sit only one foot above the floodplain and city officials acknowledge that some of the new buildings might be dealing with severe flooding in 30 years, Bagley says.

But the real estate market seems to be ignoring the increased risk. And developers don’t appear eager to pass on information about it to buyers, either.

“The real estate community doesn't really want to talk about this and they're not required to talk about flood risk,” Bagley explains. “When you buy a house and there's lead paint you have to get a disclosure form. There’s nothing like that for sea level rise, climate change and flood risk.”

For local residents, however, the last couple of King Tides have been a wakeup call, Bagley says. Most people are aware of rising sea levels and city officials are racing to take action in other ways.

“Fort Lauderdale officials are putting in new flood mitigation measures — things like one-way valves to stop sea levels from creeping onto roads. They are taking steps to reduce their greenhouse gas emissions, but it's a really tough battle.”

It’s tough because Fort Lauderdale and south Florida are very much alone in their battle against climate change, Bagley explains. Governor Rick Scott and most of the state legislators oppose taking any action to address climate change.

“Governor Scott has reversed most of the climate programs that previous governors have put in place. They've banned the term ‘climate change’ in government work,” Bagley notes. “So communities in Florida that want to deal with this issue either have to band together with their surrounding areas, which is what south Florida has done, or they really have to fight it alone.”

Mayor Philip Stoddard of South Miami has his own idea of what is ultimately likely to happen.

“My own prediction is that there will be some natural event — a hurricane, a big storm surge — [that] is going to shake people, just shake their confidence, and some people are going to start moving out,” Stoddard says. “And at that point, it's anybody's guess what happens to real estate prices. Once the perception is there that it’s not a safe place to park your money, real estate prices drop.”