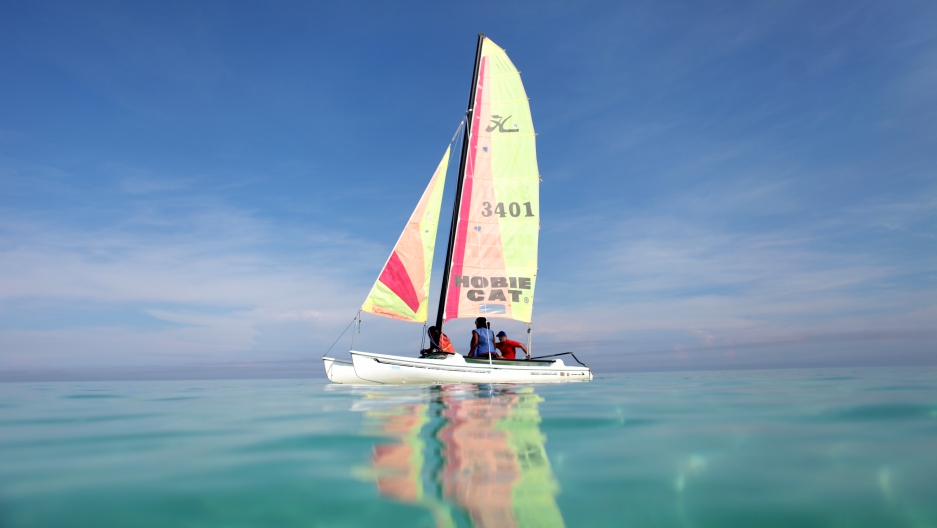 Tourists sail in a rented sailboat at the beach in Varadero, Cuba, in August 2015. Cubans are flocking to the beach in record numbers before a possible end to the US travel ban that would open the gates to American tourists and bump up prices.

As Cuba-US relations thaw, environmentalists on both sides of the Florida Straits are worried about how an influx of American tourists may impact ecosystems that have been relatively protected up until now.

The island has been called an “accidental Eden” in the Caribbean, and boasts pockets of great biodiversity on land and at sea.

“One of the perhaps unintended by-products of the embargo and the sanctions in Cuba was to keep it free from the hordes of tourists, the heavy industry and the development that has in many ways ruined lots of other countries in the Caribbean area,” reporter and Emerson College journalist-in-residence Doug Struck said.

While pollution is thick in Havana, better preserved areas are havens for wildlife and plant species. The island boasts at least two species not seen elsewhere: The bee hummingbird, an iridescent beauty considered the smallest bird in the world, and the Cuban crocodile, which hunts in packs.

The coral in the waters surrounding the island are relatively pristine, having largely been spared the fertilizer run-off and pollution that has bleached reefs elsewhere in the Caribbean, including Jamaica, the Virgin Islands and Puerto Rico.

European tourists have long traveled to Cuba, and tens of thousands of Americans already travel on official tours each year.

But environmentalists and scientists are worried about the huge new influx of visitors expected when travel restrictions are lifted for all Americans.

“The concern is that there will be too many [tourists],” Struck said. “If the doors are flung wide open, lots of folks in Cuba are worried that they’ll simply be overrun.”

It’s not just the sheer number of people that are of concern, Struck says, but the infrastructure needed to house, feed and entertain them.

“Instead of mangrove swamps on shores, you may have a hotel,” Struck said.

Gone will be the wave-buffering and water-filtering mangrove root systems, replaced by parking lots and other hard infrastructure that can lead to runoff.

Today, Cuba has relatively strong environmental regulations. Protection of the environment has been a national priority since Fidel Castro spoke at the 1992 Earth Summit in Rio de Janeiro, calling for developed nations to “fight the ecological destruction threatening the planet.”

But in a poor country, Cuban environmentalists worry those laws will be side-lined when they’re seen as standing in the way of the tourism industry and the new jobs, opportunity and money it will bring.

“The big question is whether or not what’s on the books will be enforced,” Struck said, “whether or not when that’s pitted against the lures of development and money that might come with the reduced sanctions, which will win."