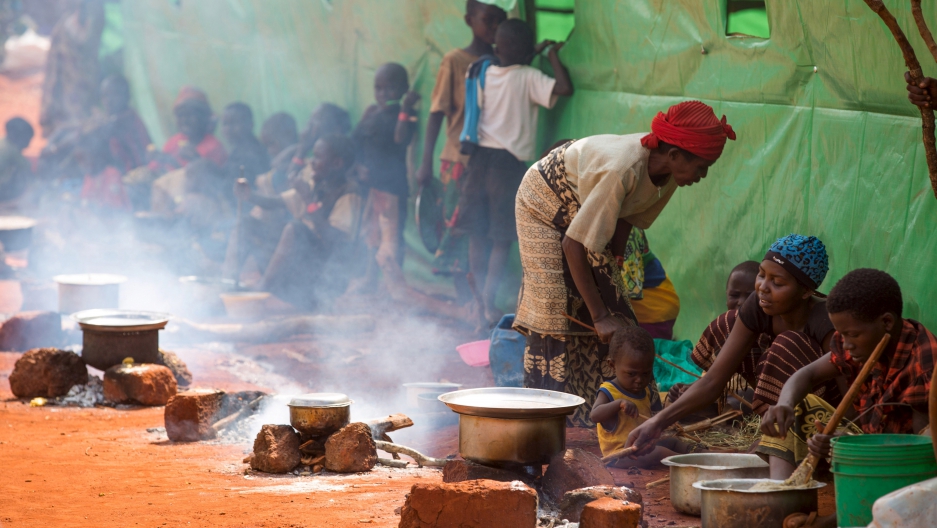 Refugees from Burundi who fled ongoing violence and political tension are seen at the Nyarugusu refugee camp in western Tanzania in this May 28, 2015 photo.

KIGOMA, Tanzania — Nigimbere Oliver had no time to act when three men stormed into her parents’ house in southern Burundi, armed with machetes.

Hidden from view at the back of the house, she helplessly watched as they slaughtered her mother and father before bludgeoning her two-year-old son to death with a piece of wood.

When they left, Nigimbere, 31, fled her home in the village of Nyanza Lac. She ran into the hills where she walked for days, hiding in the bush, until she reached the Tanzanian border.

She is one of 132,000 Burundian refugees who have sought refuge in Tanzania since last April, when protests against President Pierre Nkurunziza’s bid for a third term were violently repressed by pro-government forces.

After a failed coup in May, Nkurunziza was re-elected in July. But the bloody violence has continued against his political opponents — labeled “terrorists” by government officials — and anyone close to them.

Nigimbere, who lived in the capital Bujumbura with her husband and children, had been visiting her father, a member of an opposition party, when the men attacked.

Sitting on a mat outside the tarpaulin tent where she lives today, she is at pains to remember that harrowing night.

“I saw everything. There were three of them and they were young. I don’t remember what they looked like, it was night and I was panicking,” she tells me.

“I don’t know who they were, I don’t know why they did it. I was in a hiding place. My baby boy, Neri, was also killed. I saw it all. I had to run away. I knew they were dead.”

By chance Nigimbere found her husband and their two older children at the Tanzanian border and the family crossed together to safety.

“I didn’t have peace until I came here. When I remember it I cry,” she says.

April will mark one year since violence erupted in Burundi. The torture, abductions and arbitrary arrests have increased since the beginning of the year, according to UN High Commissioner for Human Rights Zeid Ra’ad Al Hussein.

Bodies have been dumped in streets, buried in mass graves, or taken to unknown destinations. 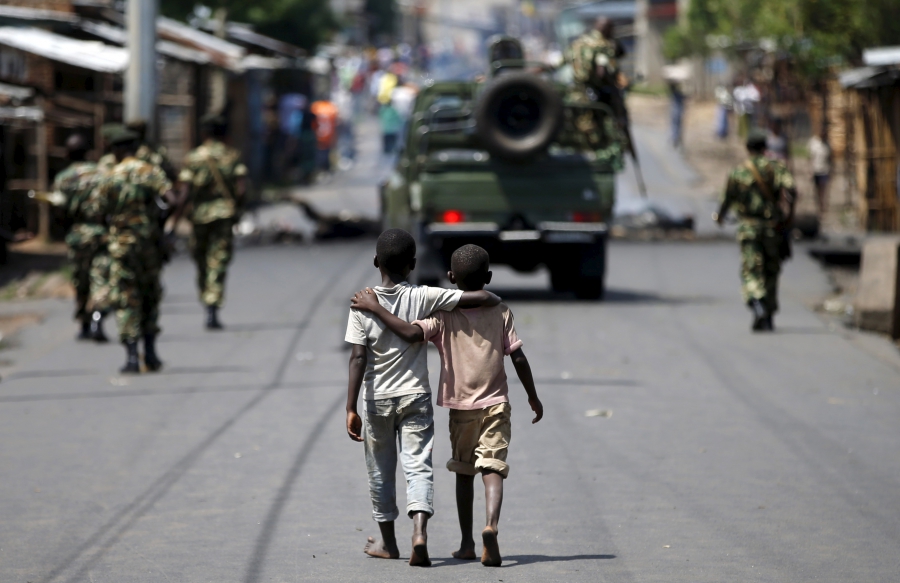 Boys walk behind patrolling soldiers in Bujumbura May 15, 2015.
Credit:

The UN reported last week that the death toll stands at 474 people since the violence began.

“But the danger is we don’t know what is happening in the rural areas. There could be a lot more killings and disappearances that we are not aware of,” she says.

Two weeks ago Hussein told the Security Council that the small central African state was on the brink of a sudden escalation of violence to “massive proportions.”

Since the beginning of 2016, there have been a number of high profile visits from the UN and African Union to Burundi to settle the political crisis. But for all the diplomacy, Burundi is still spiraling toward civil war.

Meanwhile, more than 250,000 Burundians have fled to neighboring Rwanda, Tanzania and the Democratic Republic of the Congo. The UN anticipates the refugees will keep coming, and NGOs on the ground are racing to cope with the influx.

But Burundi’s refugee crisis is largely being ignored by the world, especially as it competes against higher-profile refugee situations.

Of the $175 million the UN refugee agency (UNHCR) requested to deal with the Burundi humanitarian response, only a tiny amount has been received.

“If no political solution is found, there is a possibility that the humanitarian and security situation could worsen which could bring larger numbers of refugees into neighboring countries. Our appeal is only funded at 4 percent, which means that we can only provide the bare minimum of assistance to refugees,” a UNHCR spokesperson says.

In Tanzania, refugees are living in overcrowded camps with rationed food and water. Every week more than 1,000 new refugees arrive.

When I visit Nduta, one of three refugee camps here, a busload of new arrivals sits quietly waiting to be registered. They will be assigned to mass shelters where people sleep on the bare earth underneath tarps.

Children run around in tattered clothes and malnourished babies feed from their gaunt mothers. People collect what water they can while the taps are running.

JJ Singano, an engineer at Oxfam who is leading water provision in the Nyarugusu camp, says they are struggling to source enough water.

"The initial plan was for maybe 20,000 Burundians. We now have about 78,000 Burundians. … People are suffering. Initially they thought these people were here temporarily but now they need a long term plan." 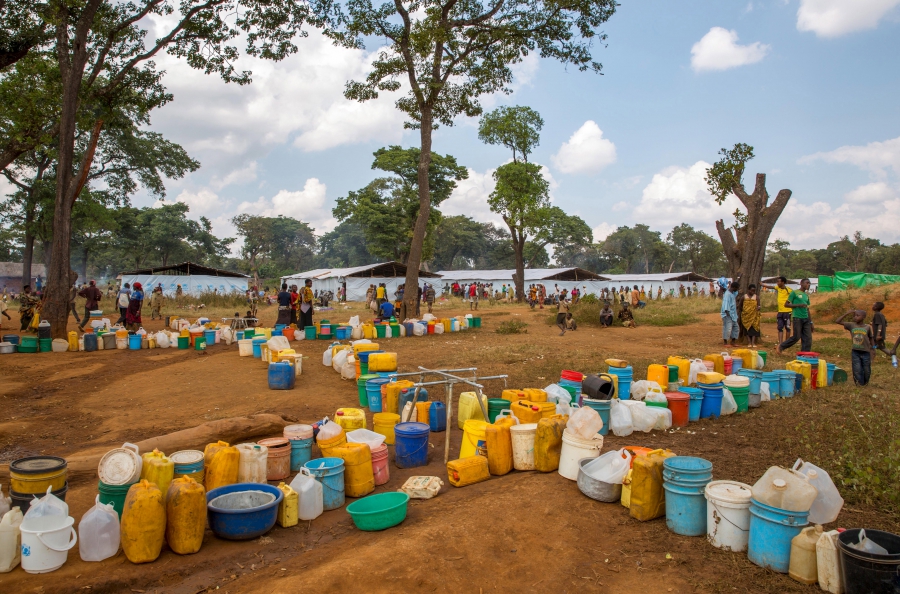 Empty jerrycans sit at the Nyarugusu refugee camp in western Tanzania on May 28, 2015.

For many, this isn’t their first time as refugees.

Janet Shimirman, 28, was brought to Nduta by neighbors when she was just eight years old. Her entire family was killed in 1996.

She spent 12 years in the camp, where she married and had her first child. Then she was forced to return to Burundi in 2008.

“When I returned life wasn’t very good. It is better staying in Tanzania,” she says, standing underneath a tree holding her 18-month-old daughter. They’re two in a crowd of refugees seeking shade from the baking sun. “But I am afraid because there are rumors we might be taken back to Burundi.”

Many in the camp share the fear of being returned to Burundi, where those they ran from can hunt them down.

Indeed, Burundi’s President Nkurunziza has been clear he’d like to see them go. Nkurunziza has sought assistance from the UN to secure the return of refugees, insisting they are eager to return.

But the Burundians I interviewed in Tanzania’s camps have no yearning to return. They dismiss the question instantly.

“I can’t ever go back. I won’t even think about it,” says Buchumi Leonard, 25, who arrived in the Nyarugusu camp with his wife and two children in June.

“I sleep in fear that people will be sent into the camp to kill me.”

A member of an opposition party, he was not at home when men arrived looking for him in Rumonge, southwest Burundi. Instead, they murdered his parents.

Last week the EU suspended funding to Burundi, which amounts to around half the country’s annual budget, as a punitive measure for the political violence.

Burundi’s foreign minister, Alain Nyamitwe, said the move was “disappointing,” but that it was not up to the EU to determine the course of the country.

Professor Jones thinks it is “too little too late.”

“The problem is the international community didn’t do anything until this week,” she says. “It’s an action that is definitely going to hurt but Burundi has gone for so long without any punishment.”

Ndikumana Kerida, 32, returned to Nyarugusu with her children after spending six years of her own childhood in the camp.

“That feeling of being a refugee is not good,” she says. “But we want to stay here. We don’t want to die. We want to rest our minds and feel secure for once.”