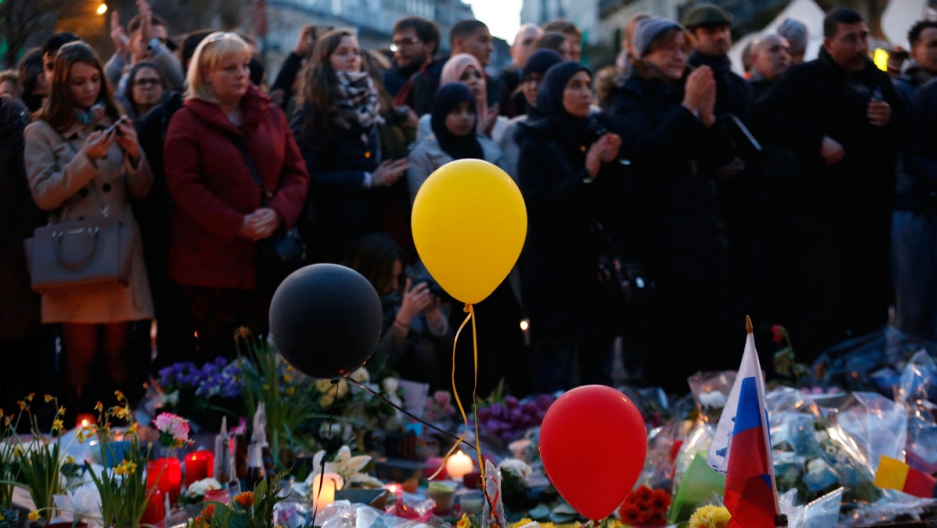 People gather at the Place de la Bourse to pay tribute to the victims of bomb attacks in Brussels.

In the crowd gathered on Place de la Bourse in Brussels, I met a man and his sons looking at the spread of flowers, candles and notes to the memory of the bombing victims.

Abdel Lahrour lives in the small town of Soignies, about an hour from Brussels. He’s taken his sons, Isham and Rayan, out of school, so they could come pay their respects.

“We came to support people because I think it is shameful, there are no words,” he said. "We can’t understand why this happened. That’s why I wanted to bring my two children here, to show them what solidarity is about.”

Lahrour lost an old friend in the subway attack last Tuesday, a really nice guy, he said. He learned about it on Facebook. He looked distraught; he said his boys, who are 8 and 11, are asking questions he just doesn’t know how to answer.

“Even we — adults — don’t understand,” he said. "We don’t know what these people are, where they came from, and we’re told they were born here. And unfortunately, because of them, people look down on us.”

Lahrour was born in Bouarfa, in northern Morocco. He came to Belgium with his family when he was 5. The fact that many of the suspects involved in the Paris and Brussels attacks were Belgians and French of Moroccan descent, is extremely disturbing to him.

"I’ve been here for 50 years, but since the attacks, people look askance at us,” he said. “I can see why. They ask, ‘How come Moroccans are doing this? They’re not Syrian, or Iraqis, they’re Moroccan.’ I don’t understand. On top of that, most of them were born here and they have everything here, work, unemployment, social benefits. Why are they doing this, to gain what? They gained nothing. That’s what I’m struggling to explain to the kids. But it’s very difficult. There are no words.”

Lahrour says he is a proud Walloon, a French-speaking Belgian, and that he has only the smallest of ties with his native Morocco, which he visits a couple of weeks every year. Belgium is his nation, he said. That’s why he’s hurt that some of his fellow Belgians seem to look at all Muslims suspiciously. He says since the Paris attacks, his sons are sometimes worried about school and how their friends will perceive them.

They often joke that their dad should change his name from Abdel Lahrour to an unambiguously French-sounding name like Alain Laroue — that makes him laugh out loud. Luckily in their little town of Soignies, the Lahrour family is well-known and integrated. But there is an undeniable feeling of suspicion swirling around.

"We are shocked because there are people who confuse these guys with Muslims in general," he said. "But we have nothing to do with this. These men are not Muslim, they are something else entirely. These are people who don’t think about their families, about their parents. Can you imagine how much their parents must be suffering right now? For the parents it’s the worst, they can’t control this, it’s impossible.”

Lahrour’s boys are looking at him in silence. You can see they grasp the gravity of the situation and the dismay of their father. And his struggle to educate his children about this shocking event is echoed by dozens of other families on place de la Bourse, who have come here with their own children to leave notes, flowers and to try to explain.