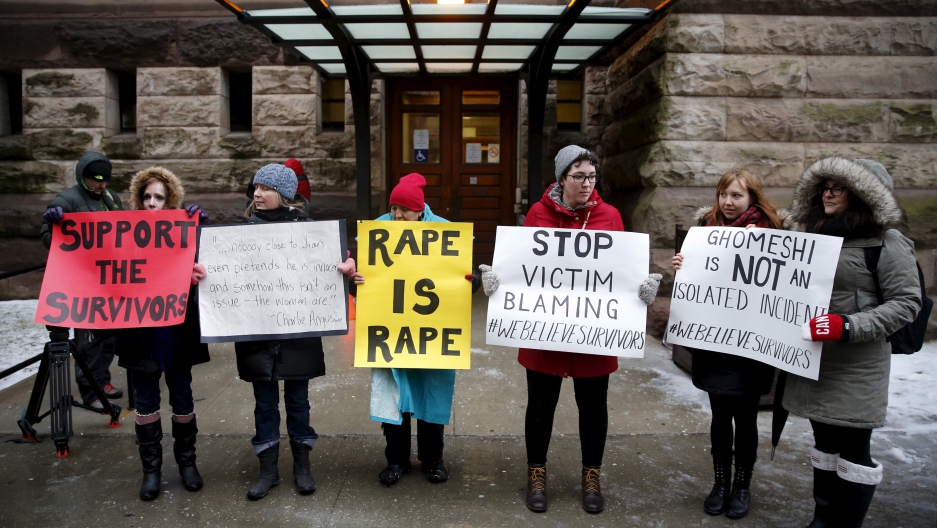 Protesters stand outside of the courthouse before an Ontario judge found former Canadian radio host Jian Ghomeshi not guilty on four sexual assault charges and one count of choking.

Jian Ghomeshi was a media icon in Canada.

That was before he was put on trial for sexual assault charges.

Either way, it's no surprise his trial was big news north of the border.

What was unexpected for many was just how the trial played out, leading to a verdict this week that came back "not guilty" on all counts.

"People expected that the sheer weight of the number of complaints would be compelling," says University of Ottawa law professor Carissima Mathen. "Then what happened in the course of the first trial is that the defense offered a lot of information to uncover some inconsistencies or some oddities in things that the complainants had said."

Defense lawyer Marie Henein uncovered flaws in the testimony of all three complainants, Mathen says, calling the result "devastating" for their credibility.

"And then Marie Henein produced ... two emails that the complainant had sent to Jian Ghomeshi six months and a year later which were friendly, and in one case actually included a picture of her in a red bikini. Now that in and of itself is not relevant, but in the context of her prior statement, it was put in somewhat of a bad light."

Thursday's verdict is provoking an uproar on social media. In Toronto, protesters have been rallying outside the downtown Toronto courthouse.

Some have called Canada's record when it comes to reporting and securing convictions in sexual assault crimes "dismal." The Guardian says less than 10 percent of sexual assaults are reported. A 2012 study from the University of Ottawa found a conviction rate of around 0.3 percent.

But Mathen cautions activists from reading too much into the verdict of this first Ghomeshi trial.

"The notoriety of the case frankly was a blessing and curse because it created a tendency to view the case as emblematic of all sexual assault trials. I absolutely agree that there are systemic issues still with investigating, prosecuting and convicting in sexual assault cases. And that is a major problem.

"That said, it's risky when so much of the debate is focused on one criminal case. Any criminal case is in some respects unique. I believe that the amount of information that the defense had in its possession, going back 13 years, was unusual in a case of this kind. But it created this sense of an ambush on the complainants."

Ghomeshi will face a second trial in June on a separate charge of sexual assault.

Mathen expects that the complainant in that trial will also face a "grueling cross examination."