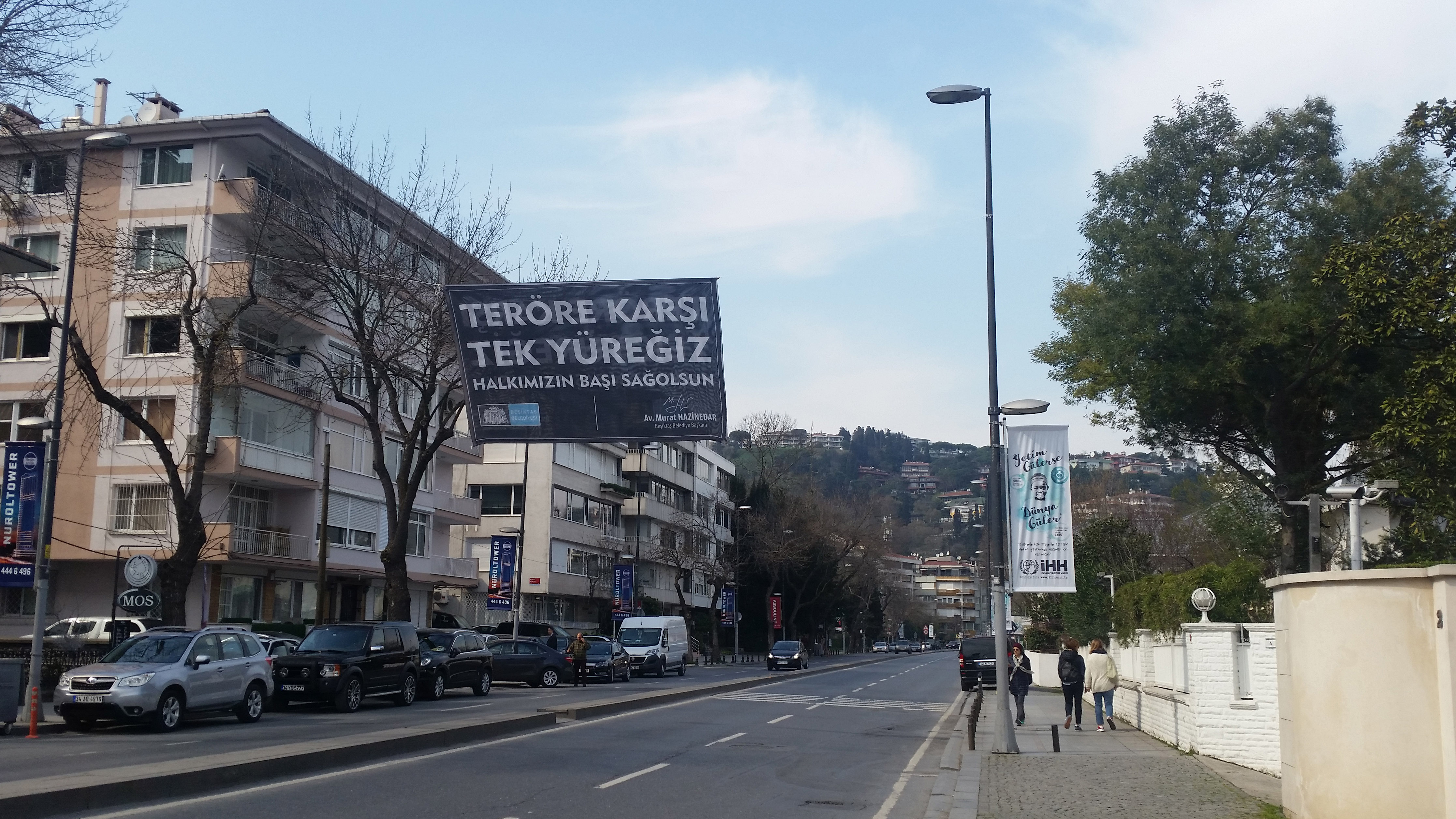 Banners are hanging all over Istanbul with different messages of unity and anti-terrorism. This one says, "We are one against terror."

Turkey has seen a wave of terror attacks like never before. On Saturday, four people were killed and dozens were injured when a suicide bomber detonated his vest in central Istanbul. Just six days before, a car bomb went off in one of the most trafficked areas of Turkey’s capital, Ankara, killing at least 37 people and injuring more than 70.

In February, another attack in Ankara killed at least 30, and in January, a bomber in Istanbul targeted tourists, killing 13 people.

And that’s in 2016 alone. There were three more in October, July and June of last year. The one in October was by far the largest terror attack in Turkey’s history. The bombers, who, according to the Turkish government were linked to ISIS, targeted a peace rally in Ankara, killing more than 100 people and injuring around 400.

It sounds like this happens all the time in Turkey, but these attacks are new. Istanbul and Ankara are vibrant cities — the equivalent to New York and DC, but a lot bigger.

So when a conservative, pro-government pundit went on live TV and told viewers, “Turkey should get used to living with terrorism for some time,” people were outraged. In defiance of that statement, the hashtag #Alışmayacağız (#WeWillNotGetUsedToThis) started trending on social media.

After the bomb went off in Istanbul on Saturday, the hashtag re-emerged.

#Alışmayacağız = #WeWillNotGetUsedToThis A sign hangs on a shuttered storefront in central Istanbul. It's a defiant refusal to accept the surge in violence plaguing Turkey since last summer. Yesterday's suicide bombing in Istanbul is the fourth targeting civilians in Turkey in 2016 -- and came just 6 days after a car bomb killed dozens in Turkey's capital, Ankara. Following last week's attack, a pro-government writer said on TV, "This is just something our citizens will have to get used to," referring to the heightened threat to security. But many in Turkey refuse to -- it is their government's responsibility to keep them safe, they say, not encourage people to adopt this state of violence as the new normal. Even across the Bosphorus -- the long winding body of water that splits Istanbul between Europe and Asia -- from yesterday's attack, the streets remain eerily empty this Sunday morning. #Alışmayacağız

People are angry at their government for failing to keep them safe. They’re angry at “outside forces” who they say want to see Turkey fail. They are angry at Kurdish separatists who claimed responsibility for the two car bombs in Ankara this year. Some are angry that Turkey didn’t keep its word and make peace with the Kurds.

The peace deal between Turkey and Kurdish separatists unraveled when Turkish forces began targeting Kurdish outposts in Northern Iraq and Syria, just south of Turkey’s border. Since then, images from certain parts of Turkey’s Southeast could easily be confused for the battlegrounds of Syria.

Others are asking why ISIS was allowed to operate in Turkey for so long. For years, neighborhoods in Turkey have been known to be ISIS recruitment centers. Most foreign fighters who joined the organization in Syria crossed the border via Turkey. While ISIS has never claimed responsibility for an attack on Turkish soil, four of the last six attacks were blamed on people said to have ties to the brutal radical group gripping swaths of Syria and Iraq.

When Brussels was hit with coordinated bombs during rush hour on Tuesday, people in Turkey were devastated again. It was the kind of attack they’ve grown to fear in their own cities, but not one they would wish on anyone. They know what it’s like to be devastated. They won’t get used to it.