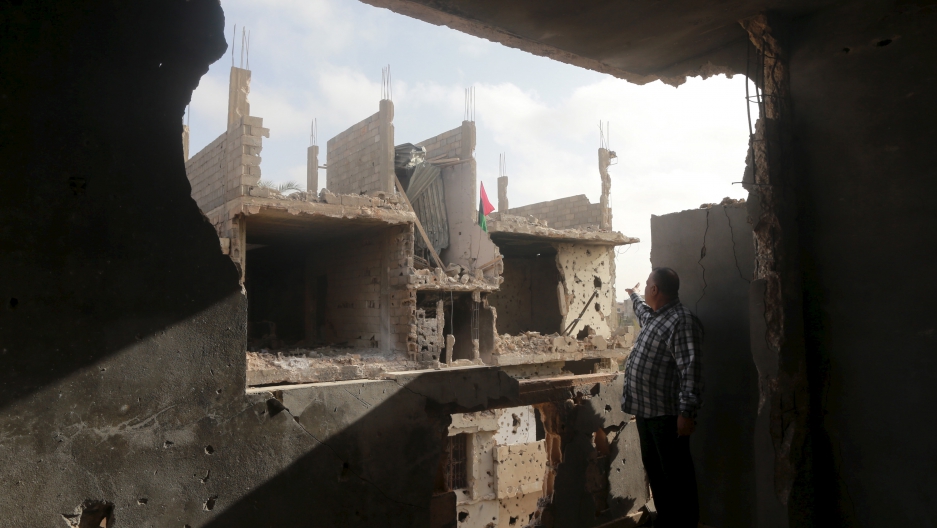 A man stands in his house, which was destroyed during clashes between military forces loyal to Libya's eastern government and the Shura Council of Libyan Revolutionaries, an alliance of former anti-Gaddafi rebels who have joined forces with the Islamist group Ansar al-Sharia, in Benghazi, Libya, March 12, 2016.
Credit: Esam Omran Al-Fetori
Share

Authorities in control of Libya's capital on Friday declared a "maximum state of emergency" after a UN-backed unity government that they reject said its members would head to Tripoli to begin work.

The city is under the control of an administration backed by armed groups, including Islamists, that is not internationally recognized.

The head of the Tripoli authorities Khalifa Ghweil called on his interior and defense ministries and allied armed groups to "take all security measures necessary to preserve the country's stability by increasing patrols and security checks," a statement on his administration's website said.

But streets were calm on Friday morning, an AFP photographer said, with police cars deployed at their usual positions around the city and no signs of extra security measures.

Libya has had two rival administrations since mid-2014 when an armed alliance overran the capital, setting up its own authority and causing the government backed by the internationally recognized parliament to flee east.

The United Nations has been pushing for the two sides to cede power to a unity government under a power-sharing deal announced in December, but both have rejected the new authority headed by prime minister-designate Fayez al-Sarraj.

The Tunisia-based presidential council headed by Sarraj said this week that the unity government would start work in Tripoli "within the coming days."

The council earlier this month said the unity government would take office on the basis of a petition signed by a narrow majority of Libya's elected lawmakers.

UN special envoy Martin Kobler was on Wednesday prevented from traveling to Tripoli to work on installing the power-sharing administration.

Libya has descended into chaos since the 2011 ouster of longtime dictator Moamer Kadhafi, allowing jihadists including the Islamic State group to gain ground in the oil-rich country.