If you’re from a podunk town, you’ve probably spent some of your time complaining about it, wishing you were from somewhere else, and set your sights on getting out.

I know I have at one point or another. But after the discoveries I made this past week, I am counting the many blessings of coming from a small suburban town in New Jersey with an insignificant name.

Being from a state dubbed the "armpit" of the United States, I now realize things could have been worse. Dicktown, New Jersey, could have been my homestead. Imagine giving that answer during an introduction. Then there's Virginville, Pennsylvania, Oral, South Dakota, Erect, North Carolina, and the list goes on.

Yes, these are real places. America is full of suggestive and dirty-sounding place names, some of which were created before certain words had sexual connotations. And some sound funny because of a difference in language.

Here’s a list of 11 dirty-sounding town and city names and their innocent origins:

This Nevada County town's name sounds like the beginning of a wishlist for desirable qualities in a lover. The town was first settled in 1849 by a Wisconsin mining company called Rough and Ready Company.

The company’s leader, Captain A. A. Townsend, named the company after General Zachary Taylor (nicknamed “Old Rough and Ready”), who had been elected as the 12th president of the United States that year. Taylor got the nickname for his reputation as a fearless military leader. Townsend served under Taylor during the Mexican-American War when he commanded US forces.

Before we get into this one, residents of the town would like to remind you "It's a location, not a vocation," as the offical town slogan notes. This small city in Texas County is named in honor of a cattle rancher named John “Hooker” Threlkeld.

In 1873, he was one of the first people to start running cattle in the 40 mile-wide area that was initially labeled undesirable territory. Threlkeld earned the nickname Hooker because of his reputation as one of the best cattle ropers of his time. 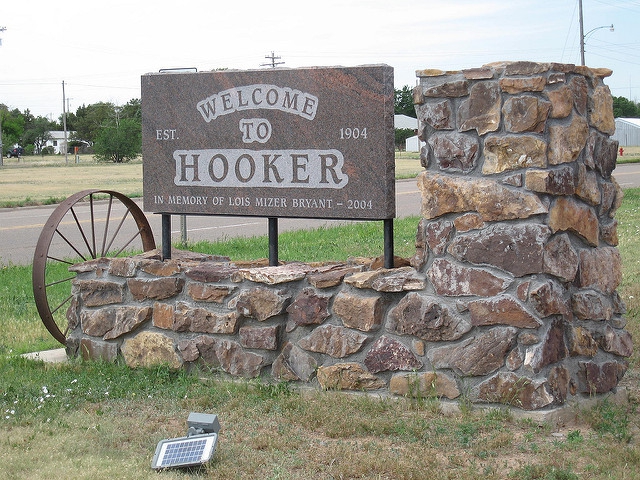 Get your mind out of the gutter. The positioning of the lakes in this town is what gave it its name. From an aerial perspective, the series of lakes in the town form the aforementioned bird with its wings spread.

Just what are the residents of this town trying to squeeze through? Alas, nothing too exotic. This town is located in Pittsylvania County and is said to have gotten its name after two storefronts were built to the edge of a dirt road right across from one another.

In 1870 a general store was opened by W.H. Colbert. He built his store to the edge so that women riding in carriages could set out from the vehicles directly onto the porch of the store. Soon after, a man named Isiah Giles built a blacksmith-wheelwright store close to the edge of the road, too. People traveling through the area in buggies and wagons had to slow down to safely pass between the two buildings. Travelers began warning one another of the “tight squeeze” and the name stuck.

Oh the irony! How did a home to the virtuous Amish get such a name? The village, which was founded in 1754, was first named Cross Keys after a local tavern. Its name was changed to Intercourse in 1814. According to its website, there are multiple theories concerning the origin of the name. One, which is probably true for a lot of dirty-sounding place names, is that in old English, the term meant something else.

Intercourse then was often used to refer to “fellowship” or social interaction. Another theory is that the name comes from an old racetrack in the area called Entercourse, which, over time, could have morphed into Intercourse. The last theory is that the name is rooted in two major roads that intersected in the the area: Old King's Highway, now called Philadelphia Pike, and the highway that leads from Wilmington, Delaware, to Erie, Pennsylvania.

Pennsylvania is a treasure trove of strange town names. This town in Lancaster County was founded by Tobias Ream in 1760 and was originally named Zoar. The land for the town was deeded to him by his father, Johann Eberhard Ream, who first settled in the area in 1723 or 1724 with permission from the Cocalico indigenous people. The name was changed in 1803. 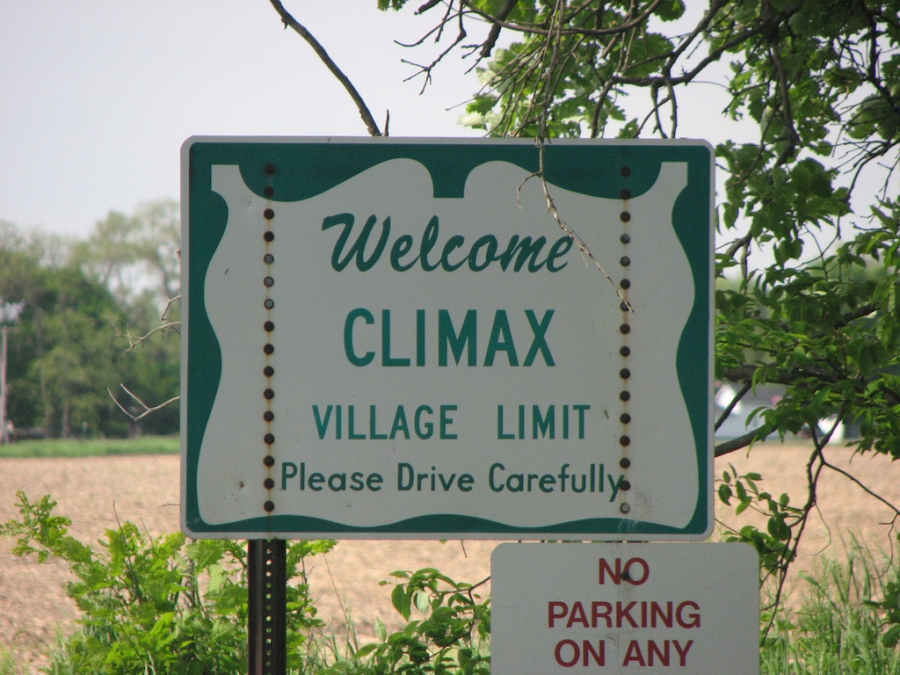 There are many towns that have adopted this name. According to Kalamazoo Public Library, the one in Michigan got its name from the son of early settler Judge Caleb Eldred. Eldred had spent months searching for good farming land and finally came across a prairie in 1834. His son Dan climbed a tree to get a good look at the land and said, “This caps the climax of everything we saw.”

For some reason, this town name makes me think of the film "Happythankyoumoreplease" about couples and their struggles in love. This port city was named for its founder, former Governor John Motley Morehead. The city was once known as Shepard Point after David Shepard, who along with Morehead and a few other investors were part of a land development project called Shepard Point Land Company.

Read as a sentence, this Lakewood neighboorhood may sound like a sensual command, but its name is actually a Chinook Jargon word that has interchangeable spelling and meaning. It can mean friend, people, tribes and other similar terms. Chinook Jargon, also known as Chinook Wawa, is a pidgin trade language rooted in the language of the native Chinook people, as well as other languages.

This dialect was used extensively in the Pacific Northwest during the 19th century for communication between European settlers and Native Americans. The Chinook people resided in what is present day Washington and Oregon.

While this name may conjure up many strange images, it, too, is a word derived from the language of a Native American tribe. This town in the northern end of Grays Harbor County is named for a nearby river, the Humptulips River. Humptulips is a Salish word, the language of the indigenous Chehalis people, and means “hard to pole,” referring to the challenge the Chehalis faced while using poles to guide their canoes up and down the stream.

This post is a part of The World in Words Nametag series, where we are digging up the stories behind place names. Have you always had a question about a place name? Be it a street name or the name of a town or a mountain? Submit your Nametag story ideas to us at language@pri.org or tweet at us at @lingopod.