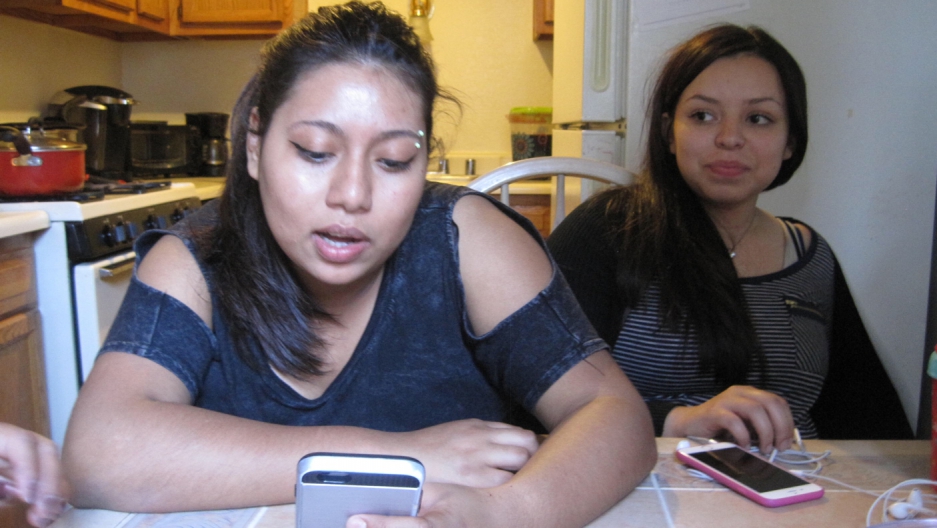 Nataly Amaya (left) and Monica Cisneros (right) are closer now to each other than to anyone else in the US. When they met, they thought they'd never get along.

Nataly Amaya and Monica Cisneros are stepsisters, but growing up in El Salvador, they never knew each other.

Nataly’s mom married Monica’s dad while living in Vallejo, California, near San Francisco. The girls were raised by different grandparents in different parts of El Salvador. When they met, at 15 and 16 years old, they weren’t sure they’d ever get along. They seemed too different.

“She’s more feminine than I am,” says Nataly, who has a piercing in one eyebrow and likes to wear all black.

She saw Monica as a girly-girl.

“And she’s really sensitive. I grew up around all boys, and I never had a girl around who cared about fashion.”

Laughing, Monica admits she cries about everything. At first she saw Nataly as tougher, more reserved.

“She sometimes tries to hide what she’s feeling,” she says.

As different as they were, the two girls shared one important thing: fear, of the gangs rampant in El Salvador. In their early teens, both girls were threatened they would be kidnapped. Afraid for their lives, they connected and decided to migrate north, together, to be with their parents in California.

“I think the whole journey was a factor for us to get to know each other and feel closer,” says Nataly. “The feelings kill you inside. You think, ‘I’ve left everyone behind. I’ve left my family, my friends. It’s Monday and you think, ‘I would be at school right now,’ or, ‘I’d be coming home now.’ And the only thing you have are the people traveling with you.”

The girls rode north by bus through Guatemala and Mexico. It’s a hard journey for anyone, but for two teenage girls, it was grueling. They tried to make jokes to make each other laugh. On one cold night, with no blankets on the bed where they were staying, they huddled together and wrapped the sheets and towels around each other to keep warm.

Then, one day, Mexican officials took Monica off a bus to question why she was in the country, and the two girls were separated.

“I was close to being deported,” Monica remembers. “But since I had my police report, they let me go.”

By the time the officials let her go, the bus had gone on without her, and Nataly was already in the next town. That’s when Monica realized she missed her sister. That night, she couldn’t sleep.

“I was afraid of everything. I had never been alone before. I was just crying and crying. And after that, I was scared every time I saw a policeman or a soldier,” she says.

When she was able to reunite with Nataly the next day, both girls leaned on each other more for comfort.

Related: Getting an education is the latest battle for migrant children who crossed US border alone

It took them two weeks to reach the US. The US Border Patrol stopped them in Texas, and they were separated in detention, and then released, one by one, to live with their parents while they waited for their court dates. Nataly was detained a week longer than her stepsister. When she finally flew to California, she was really nervous, until she saw Monica again in the airport.

“I was coming down the steps and the first person I saw was Monica. Then, I looked and saw my mom.” Nataly chokes up, remembering.

She hadn’t seen her mother in 11 years, since she was 5 years old.

The reunion was joyful, but also painful. Monica hadn’t seen her dad since she was little either. It was hard to get used to this new family: parents they didn’t really know, a little brother born in the US and stepparents.

“It was a war at first,” says Nataly’s mom Rosa. “Nataly didn’t want her stepdad to say anything to her. She would explode and yell at him. And if I said anything to Monica, she would answer, ‘You aren’t my mom!’”

“Now, when we remember that, we laugh about everything we went through,” she says.

What kept the girls going as they struggled to adjust to a new country, a new language, and a new family, was the sister they each found on the journey.

“The first night we got bunk beds,” Nataly says, “Monica couldn’t sleep and she asked if she could come down and sleep with me. That’s when I realized we were starting to love each other.” 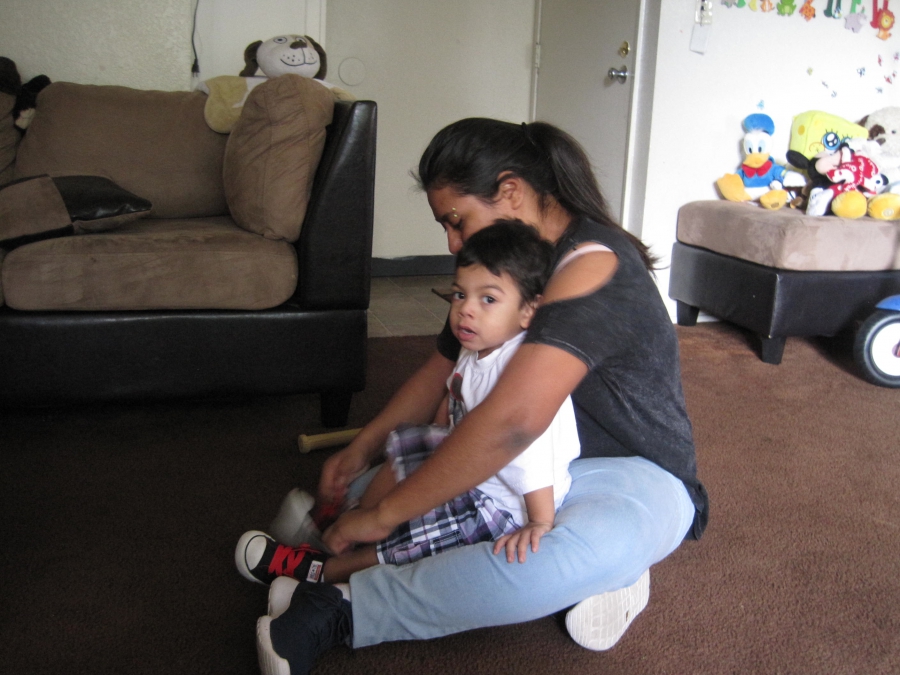 Matthew is both Nataly and Monica's brother. Here, Nataly helps him tie his shoes.

At the family’s apartment in Vallejo, Monica peeks over Nataly’s shoulder while she plays with her cell phone. The two giggle and laugh with their mom and dad, tease their 2-year-old brother, and fight playfully over the last pastry after dinner. They do everything together now. They take almost all the same classes at high school and work at the same McDonald’s in the afternoons.

Last May, both girls won asylum to stay in the United States, after attorneys from the Centro Legal de la Raza in Oakland argued successfully that they were persecuted in El Salvador because they were seen as vulnerable because their parents didn’t live with them. The girls say it’s a relief to know they can stay here.

They still fight sometimes. In true sisterly form, Nataly says she hates it when Monica borrows her clothes. Still, she admits they’re closer now to each other than to almost anyone else.

“Everything we’ve gone through, we share it,” Nataly says. “Going to a new high school where they don’t speak your language would be scary for anyone. It helps to have someone by your side from the very first day.”

It helps to have a sister, who knows you, and what it took to get to the United States, in a way no one else can.