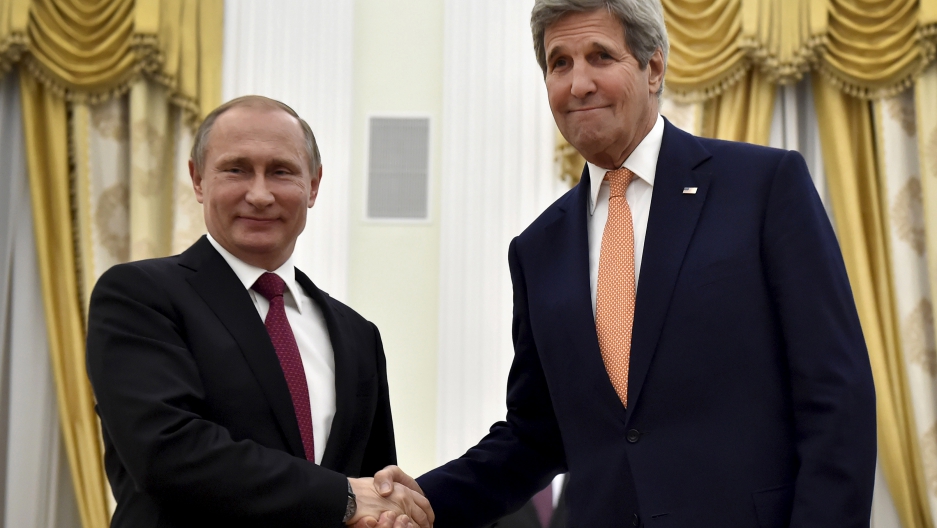 A striking photo in the news out of Moscow today.

US Secretary of State John Kerry and Russian President Vladimir Putin — shaking hands and smiling at the Kremlin today.

The two men met for talks about Syria and Ukraine.

That doesn't mean there's a sudden thaw in US-Russia relations, according to Michael McFaul, the American Ambassador to Russia from 2012 to 2014. McFaul is now a senior fellow at the Stanford University's Freeman Spogli Institute for International Studies.

"The word that the Russian press is using to describe Secretary Kerry's visit today is that we are having 'friendly relations' between the United States and Russia. I think that's very inappropriate. We should be able to sit down at the table, across from Mr. Lavrov, from Mr. Putin and cooperate when it's in our interest, but have no illusions that we're on to a new period of grand cooperation, or detente, or reset."

"Sec. Kerry is seeking to negotiate a solution with a weak hand.  And it's the Russian Air Force that that has created facts on the ground that has strengthened Assad's negotiating position."

"Remember while these negotiations are happening the Russian press and Russian propaganda are describing us as the Evil Empire. They're talking about all the bad things we're doing, all the destabilizing things we're doing in Ukraine, in Russia, in Syria. If you watch Russian press you'll see that we not only invented ISIS we continue to support ISIS. That's the people who are on the other side of the table.  And having said all that, we want peace in Syria, I believe the Russians want peace in Syria, and eventually I hope we both want a true political settlement in Syria."