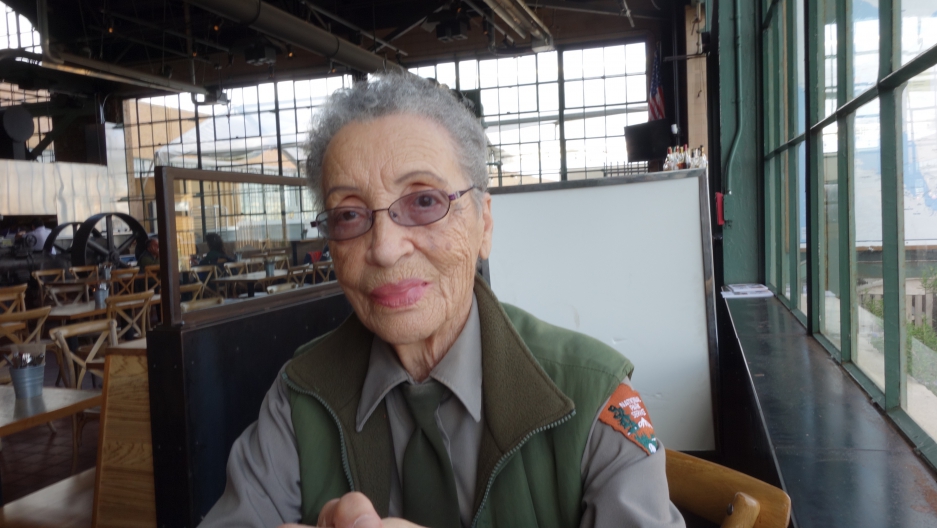 When you’re in San Francisco, it’s easy to overlook Richmond.

It’s across the water, across a long bridge (the Bay Bridge or the Richmond Bridge, take your pick), in the East Bay. It’s known as being scrappy, transitional, a little sketchy. Your chance of becoming a victim of violent crime there is twice as high as in California as a whole. 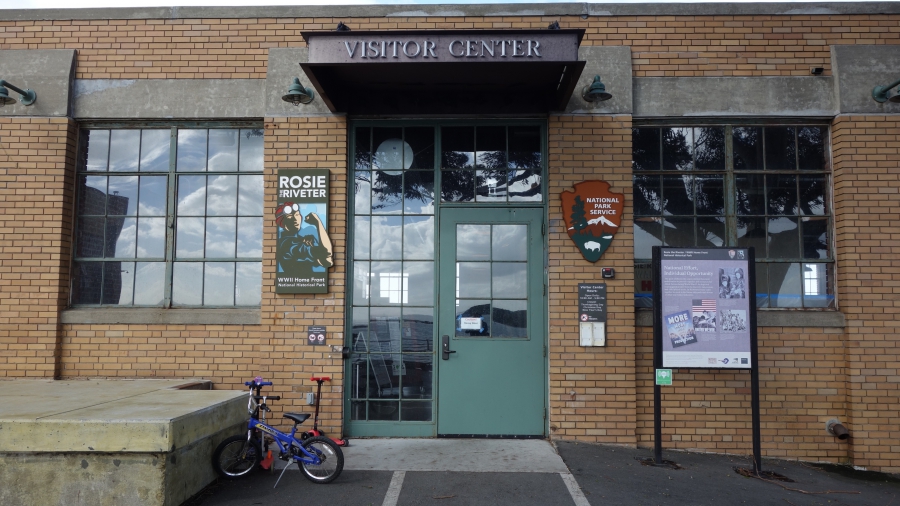 But Richmond has a story to tell, about how it helped to shape the course of a war abroad and of American society at home. The nation’s oldest park ranger, Betty Soskin, 94, was there to see it happen, and has lived long enough to have some perspective on what it all means. 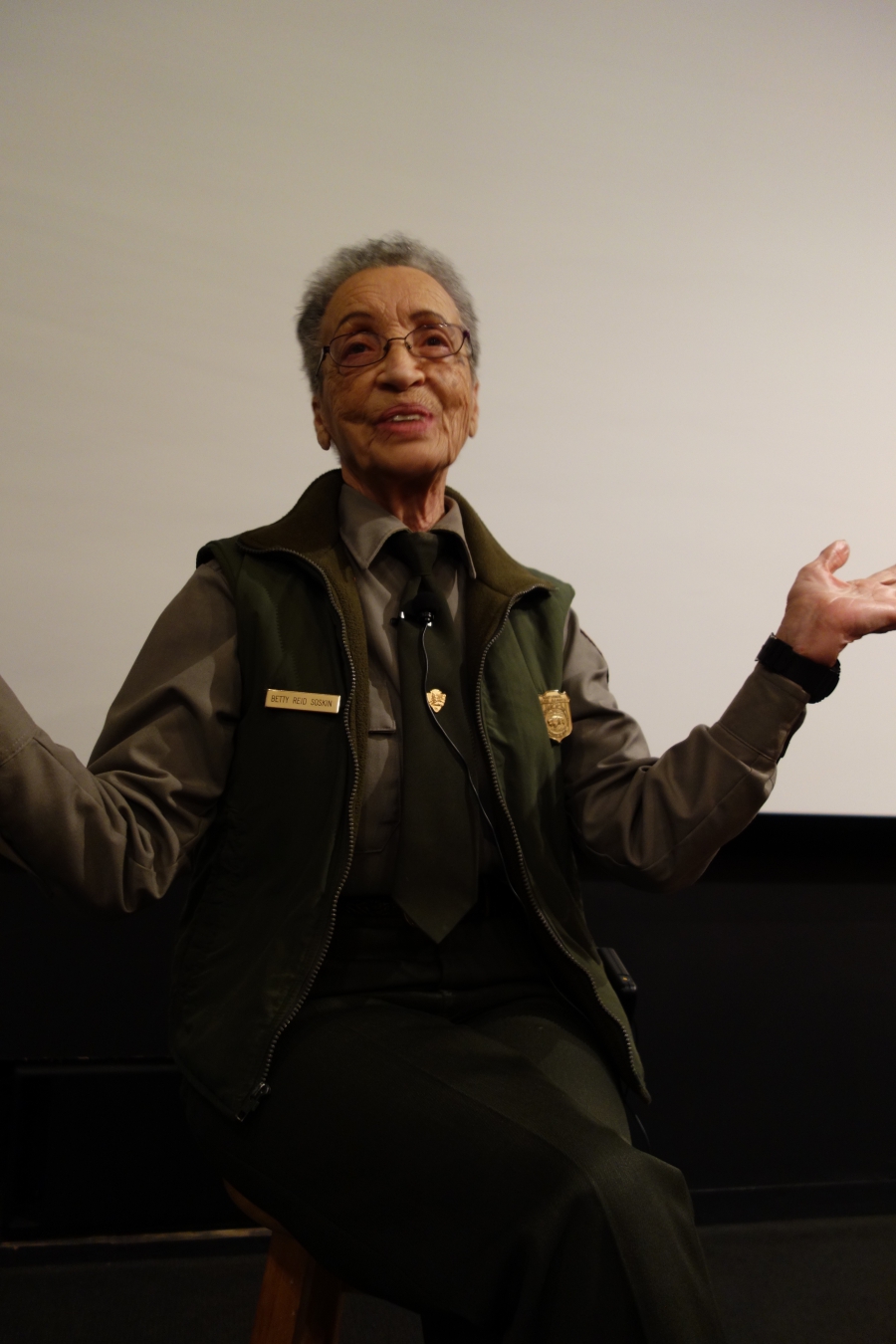 Betty Soskin, 94, talks to visitors at the Rosie the Riveter museum in Richmond, CA about racism, civil rights and social transformation over her lifetime.

Richmond boomed during World War II, with migrant workers — black and white — recruited from the South by shipyard owner Henry Kaiser to come and build warships,.

“It was possible for a black man to be standing on the sidewalk in Jackson, Mississippi, where Southern tradition demanded that he step off into the gutter if a white person approached, that man could find himself tapped on the shoulder by a Kaiser recruiter, and two weeks later, be in the city of Richmond, riding in the front of the bus, 10 years before Rosa Parks would refuse to give up her seat in Montgomery, Alabama,” Betty Soskin says in one of her talks at the Rosie the Riveter museum. 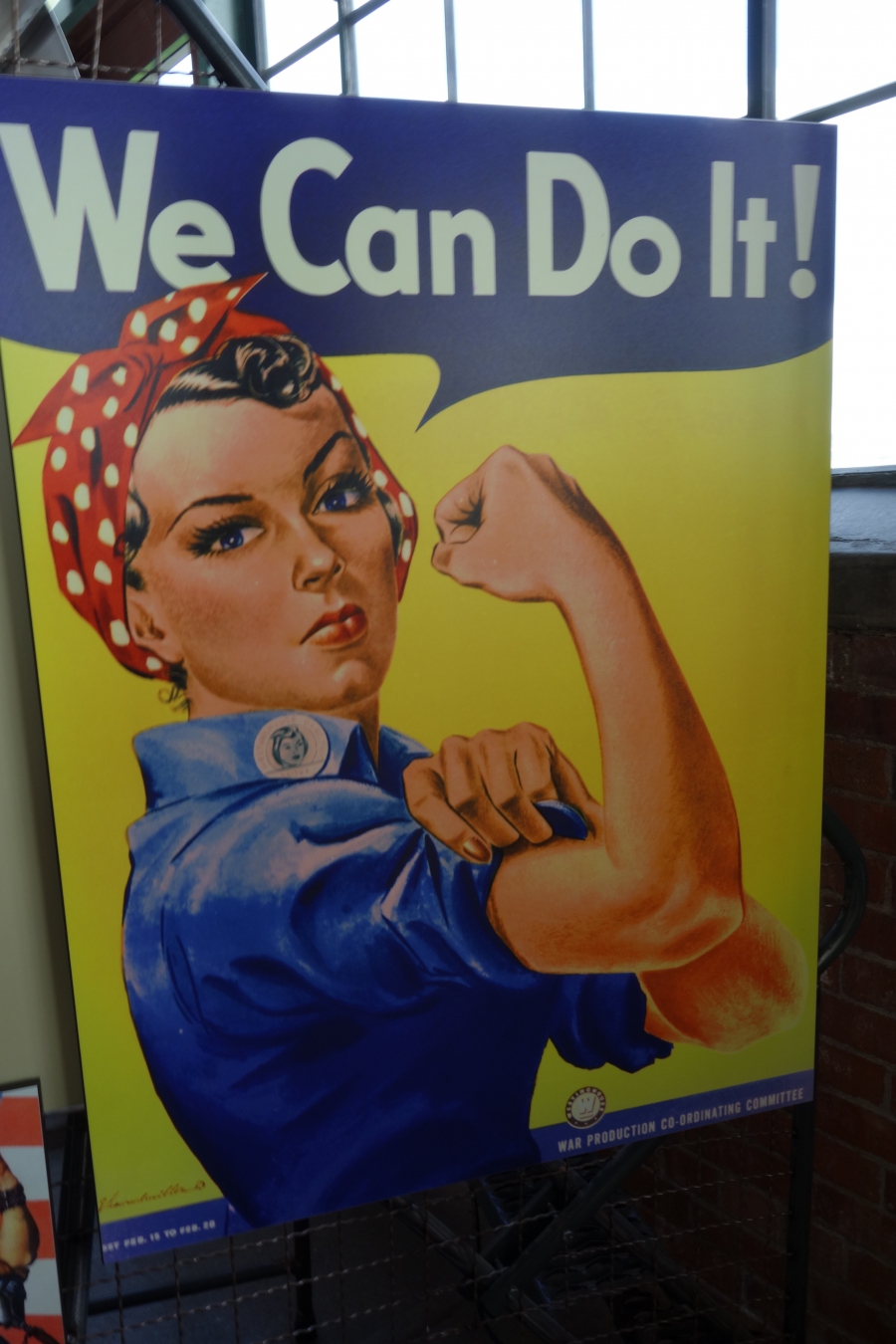 The Rosie the Riveter story is one the nation knows well — of how women came in to fill jobs as men left for the battlefields, and found empowerment, even though many went back to being housewives once the war ended and men came back to claim their old jobs.

The feminist movement was one type of social change that got a boost from the war effort in Richmond. But so did the civil rights movement, Betty says, as someone who participated in it.

“You’ve got black people coming out here as migrant workers, with hope, and expectations for a better life to be met, by white people, coming out here, white settlers, expecting a continuation of white privilege, and into a city with a population of 23,000,” she says. “Into that city, Henry Kaiser would bring in a workforce of 98,000 black and white Southerners, who were not going to be sharing drinking fountains, schools, housing, any kinds of public accommodations, for another 20 years back in their counties of origin. That’s not going to happen until the ‘60s. We are talking 1942. And no time for focus groups or diversity training. They had to negotiate every day as it comes, at the personal level.” 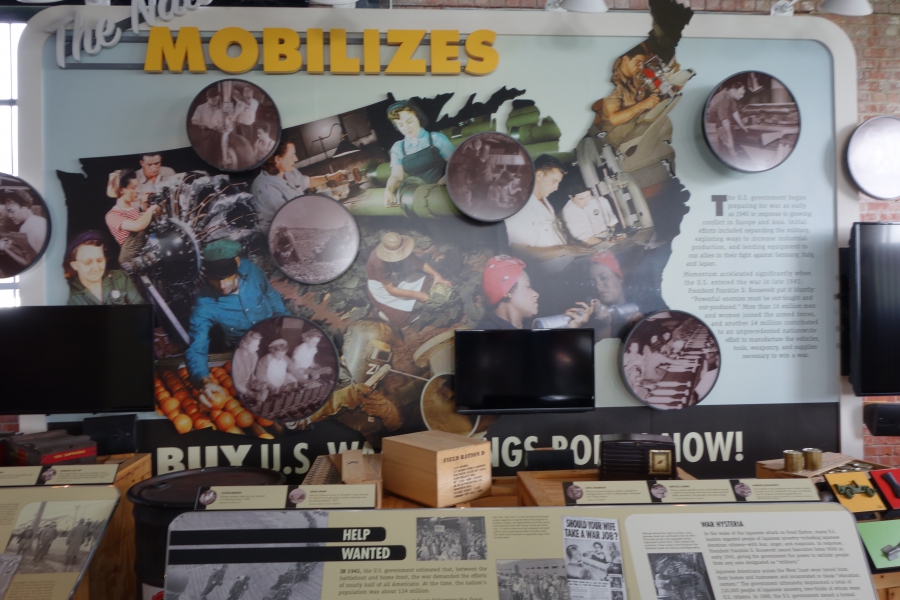 Poster at the Rosie the Riveter Museum, Richmond, CA

Betty herself worked in Richmond, but not as a Rosie the Riveter. She was a 20-year-old clerk, working in the all-black auxiliary of a segregated boilermakers union.

“It was an auxiliary, because the labor unions weren’t yet racially integrated,” she says. “They wouldn’t be for another decade. ... If you’d asked me at the time, I would have said that all the shipyard workers are black, because the only people I saw were the people who came up to my window to get their addresses changed, and that’s what I was doing to save the world for democracy.”

And so, Betty says, the whole “Rosie the Riveter” narrative of how everyone came together during the war at first annoyed her, because it left out her experience, and that of many other African Americans.

“We would dare to go to war, a war in which 52.8 million lives were lost worldwide, to save democracy, with a segregated armed forces,” she says. “That’s delusional. 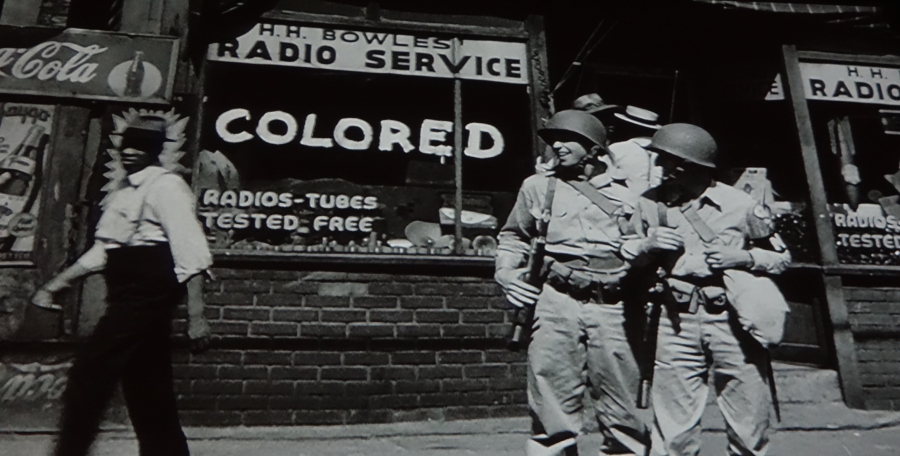 Street scene from a film shown at the Rosie the Riveter museum in Richmond, CA

“And if you knew the sequence by which people were hired — first to be hired were the men who were too old to fight; second, the boys who were too young to be drafted; third, single white women; and when that pool was exhausted, married white women. And not until 1943, the first black men were hired, as helpers and trainees only, to do the heavy lifting for the women they brought on board. And while there were some black women who worked as laborers, sweeping the decks while other people worked, it wasn’t until late in 1944, early in 1945, that black women began to be trained as welders.

Meanwhile, she says, “German officers were being entertained in officers clubs, while black people in uniform were being told to come to the back door to be served, or were being refused service altogether. ... That’s who we were in 1942.”

Betty says having lived almost a century helps her see how social change starts and takes root. So does having overlapped with her Cajun Creole great-grandmother, who was born a slave in Louisiana in 1846, emancipated at age 19 by Lincoln, and lived to be 102.

“That means that I was a full-grown woman, a mother, by that time, 27 years old when my slave ancestor died,” Betty says. “I knew her as the matriarch of my family. And on January 20 of 2009, I’m a seated guest on Capitol Mall, with a picture of my great-grandmother in my breast pocket, witnessing the inauguration of America’s first African American president, in the shadow of the Lincoln Memorial, whose life was contemporary with the life of my great-grandmother. That’s how fast the time goes. That’s almost impossible to absorb.”

In her own time, Betty has moved from being that 20-year-old clerk in a Jim Crow Union Hall, to a wife and mother whose family got death threats for buying a home in a white suburb — they lived there anyway — to successful co-owner of a music shop, to legislative staff for local City Council members, to, around age 80, becoming a park ranger, and making sure the African American experience was part of the story being told at the Rosie the Riveter museum. And over time, she says, she’s made her peace with that film she shows at the beginning of her talk.

“There’s a place in the film ... where Agnes says this was the greatest coming together of the American people ... and I’d be standing against the wall watching the audience, and I’d think ‘how can she say that? She knows that that’s not true! How can she possibly do that? And somewhere around about my 90th birthday, I aged into a place where I began to hear that as Agnes’s truth, that that was an accurate, literal expression of her reality. And I began to understand the concept of conflicting truths, that we all have conflicting truths and conflicting realities that we develop ourselves. There are many truths on the planet, and as long as there’s a place where Agnes’ truth and mine can coexist, that’s enough for me, and that’s what this place became.”