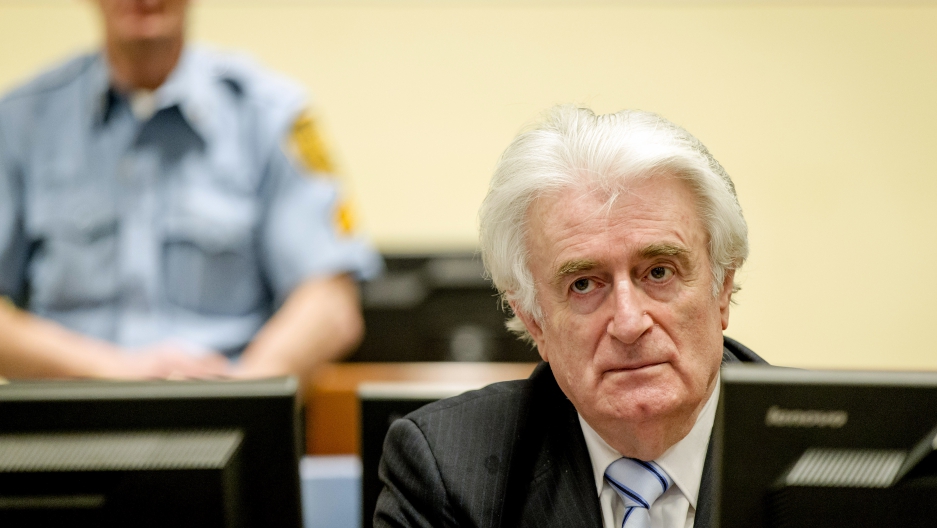 Ex-Bosnian Serb leader Radovan Karadzic sits in the court of the International Criminal Tribunal for former Yugoslavia (ICTY) in the Hague, the Netherlands March 24, 2016.

Radovan Karadzic was trained as a psychiatrist, fancied himself a poet and was known for his flamboyant head of hair. But today a UN court in the Hague convicted him of genocide, crimes against humanity and war crimes for his role as an architect of some of the worst mass killings of the conflict in Bosnia between 1992 and 1995.

Julian Borger, correspondent for the Guardian and author of "The Butcher's Trail: How the Search for Balkan War Criminals Became the World's Most Successful Manhunt" was in the courtroom today when the verdict was read and shared his thoughts:

"It was very somber. Half the public gallery was taken up by bereaved mothers, survivors, widows from the killings in Bosnia and they were separated from the court and from Radovan Karadzic himself by this thick bulletproof glass, so it was all as if in a fishbowl. Karadzic himself sat there impassive for most of the reading of the verdict. He only appeared nervous when he got up at the end, his arms stiff by his side, to hear his genocide conviction for Srebrenica and nine other counts of crimes against humanity and war crimes.

"But then immediately after the judges had left the chamber he quickly summoned a huddle of his legal advisors and got onto talking about his appeal which is going to be filed within the next month, so this saga has still some time to play out.

"When the (widows) came out of the Tribunal their attitude was really a glass half-full. They were angry he didn't get a life sentence, despite convictions for crimes as serious as genocide. There was an element of some bitterness that they didn't get everything they expected.

"Others have been convicted of abetting that genocide in Srebenica so it's not the first time we've heard this word, but he was convicted of overseeing and being a leading player in that genocide, by creating the conditions, creating the expectation that Muslims would be driven out of that area. The judges in quite a definitive finding found that he had been directly complicit in the killings, ordering these captive Muslim men and boys to be transferred and referring to them in code as "the goods," or "the merchandise," to get them transferred to a warehouse where he knew they would be executed.

"What struck me most I suppose is for all the historic nature of the judgment, the facts on the ground remain the facts that he created, this division of Bosnia into a Serb and Muslim-Croat two halves, and the Serb half remains cleansed, as he had it, of Muslims and Croats. That remains a basic fact about Bosnia today and it's a basic fact that stops Bosnia developing or moving on.

"It was a terrible failure on the part the West not to stop this killing right in the middle of Europe. It was a terrible moral failure. And I think there is a desire to look away from that now, and also a desire to forget this period of history because of a need to portray the refugees coming from the latest bout of killings in Syria and Iraq as somehow alien. There's a desire for amnesia, to forget that Europeans themselves, not long ago, were refugees from an equally brutal conflict."