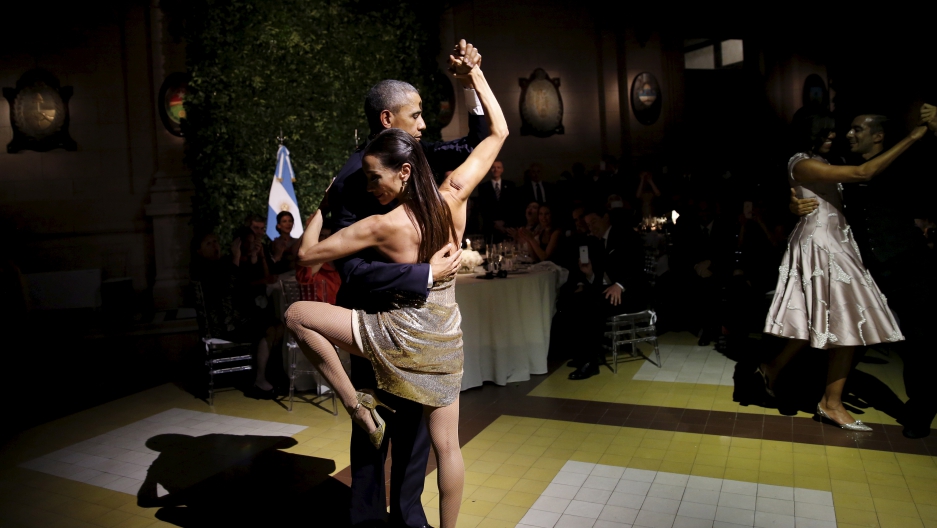 For all the world knows, President Barack Obama's visit to Argentina was all about the tango.

But his arrival in Argentina coincides with an unsettling anniversary.

Thursday marks 40 years since the military coup that began the "Dirty War" dictatorship. And while Wednesday night's tango dancing by the president, in which he refused several times before getting on the dancefloor, was a great photo op, families of those who disappeared during the era of military rule aren't pleased with Obama's timing.

"It's definitely a very sensitive date," says Buenos Aires-based journalist Irene Caselli. "Let's remember that as many as 30,000 people were tortured and disappeared by the military dictatorship, and many of those families of the victims and many human rights activists feel that the US played a big role in at least installing the military dictatorship. They see that Henry Kissinger had a big responsibility not only in backing the dictatorship here in Argentina, but also in other countries around the continent in the 1970s."

The White House announced last week a plan to declassify US military and intelligence records linked to the "Dirty War," at the request of Argentina's government. The US State Department ordered a similar release under Secretary of State Madeleine Albright during the Clinton Administration, but the CIA, the FBI and Defense Department didn't participate.

"Those documents definitely helped out in finding out more about single cases of disappearances and torture, but none of those documents ever shed light on what may have been the US involvement during those years of the Dirty War," Caselli says. "The hope is that new documents will bring more information and hopefully give more families resolution."

Obama and Argentina's President Mauricio Macri will visit the Parque de La Memoria in Buenos Aires Thursday to honor the victims of the Dirty War.

"It's a beautiful park that's actually built in the shape of an open wound, which really tells you a lot about how Argentina feels about the era," Caselli says. "Other presidents have also visited the park, but I think the presence of a US president will be more symbolic.  However, I think it will take some time for the families of the victims to really come to terms with this."

High-profile Argentines like Adolfo Pérez Esquivel have decried the timing of the presidential visit calling it "unfortunate." Pérez Esquivel is an artist and a survivor of the dictatorship who won the Nobel Peace Prize in 1980 for his efforts in bring attention to human rights in Argentina.