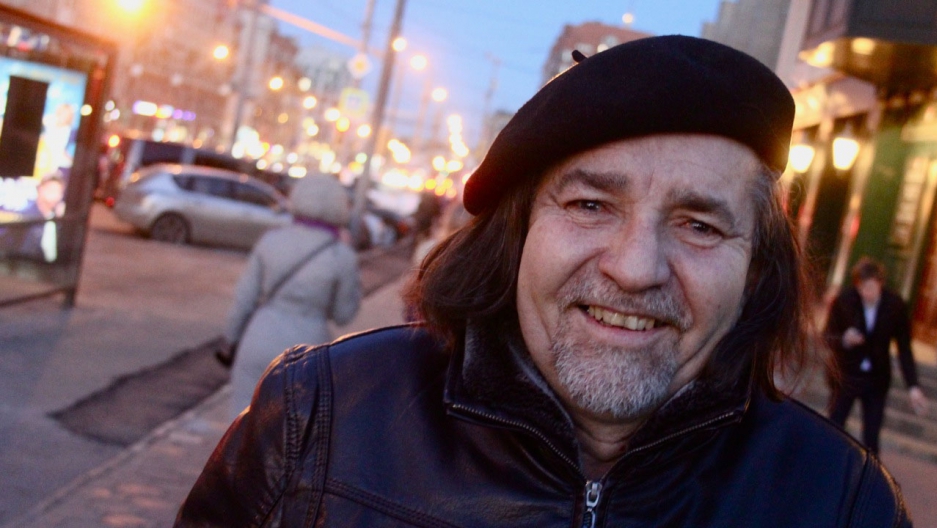 Omar Hernandez in downtown Moscow. He says problems that came from speaking his mind too freely in Cuba led him to leave in the early 90s. Now he lives in Russia.

Omar Hernandez didn't have a role in building socialist Cuba. He was born in 1963, four years after the Cuban Revolution.

But growing up in a small town on the island, he did soak up one of its benefits: an avalanche of Russian literary classics, Soviet films, cartoons, and other cultural flotsam that Soviet Russia exported to Cuba — all part of Moscow's wider effort to support the first communist uprising in the western hemisphere.

“A Cuban house was a Russian house — the television, the refrigerator, everything in it. It was all Russian,” Hernandez says.

Russians were on the ground in Cuba, he says, working with Cubans to build factories, power plants, and other aspects of the Cuban economy.

But the Soviet Cuban exchange worked in the other direction as well. For instance, those lines on the streets of Havana for Barack Obama this week? Back in 1963, it was Soviets in Moscow hoping to get a glimpse of Fidel Castro in his first visit to the USSR.

If those events offered their fair share of bland Soviet-style propaganda, they  also spawned some genuine fun — songs like the 1962 Russian hit by Muslim Magamaev, “Cuba, Maya Lubov” (Cuba, My Love).

Russian independent journalist Konstantin von Eggert says amid the 1960s thaw under Soviet Premier Nikita Khruschev, the fascination with Cuba, and its colorful band of bearded revolutionaries, was real.

“We always viewed it as a place where it was warm, where there was great music and where people were more idealistic than we [were],” he says. “You know, this idea of Che Guevara in his beret and romantic revolutionaries creating a new just state, a new just world, a new just society chimed in with the idea that socialism is essentially something very good and romantic and great, but was totally disfigured by [Soviet dictator Josef] Stalin.”

Castro's government never matched Stalinist Russia in its repressiveness but it was a distinct lack of freedom that led Omar Hernandez — by then an aspiring writer and playwright studying Russian theater in Havana — to flee abroad in the early 90s.

The problems, Hernandez says, came from speaking his mind too freely in Cuba and led him to seek a life first in Spain and then later, post-Soviet Russia.

By then, much had changed in the Russian-Cuban relationship. Faced with its own economic problems after the Soviet collapse, Russia put an end to Cuban subsidies in the 1990s, though President Vladimir Putin is now trying to reverse that.

During a visit to Cuba in 2014, Putin wrote off most of Cuba's $32 billion Soviet-era debt to Russia and he promised a new era of cooperation.

Still, there's a growing sense in Moscow that Russia's special relationship with Cuba may be coming to end amid the détente between Washington and Havana. Konstantin von Eggert says it's only logical.

“Cuba in the first place wasn't Russia's to lose. I  think it was chained to Cuba by a quirk of 20th century history,” he says. And he adds that 50-plus years of Soviet largesse have taught Russians a thing or two about their love affair with Cuba, something that Americans might bear in mind amid the easing of trade and travel restictions.

“I'm pretty sure when America returns and Cuba becomes a more normal country, they'll do very well selling their romantic attitudes to students from the east coast looking for an escape from capitalism. But believe me they'll charge you for that.”

So Viva la Revolución — but grab that Che Guevara t-shirt while supplies last.