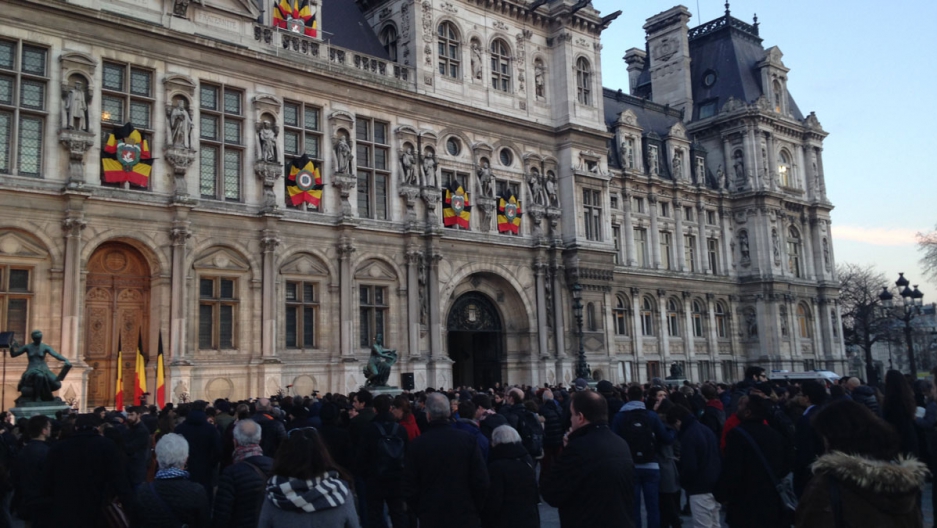 Parisians observe a moment of silence in front of City Hall in honor of the Belgian victims, and their own.

The attacks in Brussels Tuesday brought back fears in neighboring France where President Francois Hollande held an emergency meeting with ministers and visited the Belgian embassy in a show of support.

It was just last week when Salah Abdeslam, a key organizer of the Paris attacks in November, was captured in Brussels.

Manon Scotto was in one of the Paris cafés the night before it was attacked in November. So what happened in Brussels seems especially close.

“We know just how terrible it was for us,” she explained, “so we can put ourselves in the place of the families in Belgium. Scotto, who is 23, feels it’s important for French people to show the support for others that the rest of the world has shared with them.”

She was one of the Parisians who observed a moment of silence in front of City Hall in honor of the Belgian victims and their own. Paris Mayor Anne Hidalgo was present, but made no public remarks. Afterward, most of the crowd stayed.

Some chalked messages on the square or lit candles. Most just stood, sharing a sense of grief or nerves, talking quietly.

“Since the Bataclan, since Charlie Hebdo, it's strange because it doesn't stop,” said Yvan Grimaldi who learned about the Brussels attacks in a text from his wife, who had also come to the twilight vigil.

Grimaldi says his first reaction when he heard news about Brussels, was to think about his daughters. "We have two teenagers at home and they go out very often in Paris [to] concerts, bars restaurants. [They’re] 17 and 16 and this is the first feeling. It's quite selfish but it's [about] us. These two daughters are born here in Paris and we just think how are we going to go on living here in this town.”

Dodine Herry-Grimaldi also sent her daughters a message telling them, “don't take the subway and don't stay near the big subway where maybe it can happen."

Her husband doesn’t think there’s much point in telling their daughters to come home early or not to go out.

“I don't know where the attack will be so it doesn't help,” he explained. “Maybe the best thing to say is be careful where you go. But you know railway stations and airports, what can we do? So there's another possibility just to say, 'just go on and live.'”

“The main thing,” Herry-Grimaldi added, “is that it's inside of our country. These are our kids coming from the suburbs or from families — these are the threat so what are we going to do? It's not like a normal war [where] there is the enemy to see and to point at. We don't know where the enemy is. It's around us. It's inside of us.”

France has also been struggling to figure out how to fight this kind of war in a liberal society.

The country has been under a state of emergency since November, giving police extra powers to conduct searches and put people under house arrest.

Senateur Loïc Hervé, also at the vigil, explained that French values have been put in tension with security concerns.

“As a result of our history, the French are very attached to our liberties,” he noted. “At the same time, no country in the world could tolerate what we’ve lived through, what the Belgians are living through.”

After the Brussels attacks, France immediately increased the number of officers and soldiers at airports and train stations. The subway, targeted in Brussels, has long been a worry for Parisians. And it's one of the places that felt especially tense in the weeks following the Paris attacks.

Jacqueline Henri says what happened in Brussels makes the danger feel more immediate but that the feeling had never completely gone away in the interim.

“Even if we had become more relaxed on the metro, there’s a certain vigilance that has been internalized, that’s less visible but still there. I don’t think we live in the same way, even if we continue to go to the theater, the cinema, the café.”

“C’est la vie,” she says, then trails off. Life goes on but it’s different.