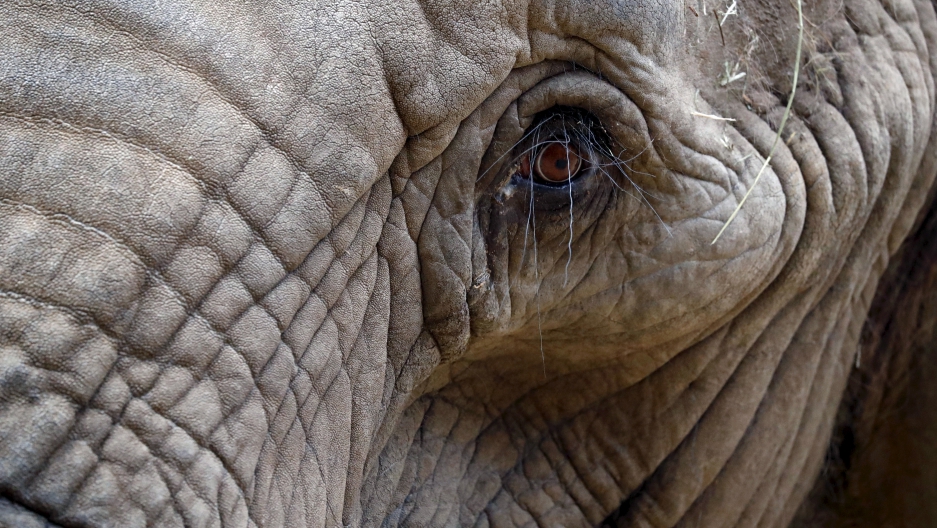 An African elephant eyes visitors as he stands in an enclosure at the Opel Zoo wildlife park in Kronberg, Germany, March 20, 2016.
Credit: Kai Pfaffenbach
Share

JOHANNESBURG, South Africa — Zoo officials called it a "rescue mission." But the arrival of five African elephants at Dallas Zoo met with protests earlier this month, part of a continuing controversy over the wild animals' newfound captivity.

The elephants are from a group of 18 acquired by American zoos from Hlane National Park in Swaziland, a tiny, landlocked kingdom bordering South Africa and Mozambique. One of the elephants reportedly died of a gastrointestinal problem while awaiting relocation; the others, aged between 6 and 25, were flown this month to zoos in Texas, Kansas and Nebraska.

The zoos argue the airlifts were intended to save the wild pachyderms from worse fates. Swaziland, like other countries in southern Africa, has been suffering a drought that is affecting wildlife. At South Africa's Kruger National Park, rangers have said they view drought as a difficult but natural process; animals with stronger genes will survive.

But the US zoos said that the animals were being removed from Hlane park in Swaziland due to drought conditions degrading the landscape, as well as “to make room for critically endangered rhinos.”

The zoos said an overpopulation of elephants was destroying the land, a situation made worse by the drought, while more resources and space were needed for Swaziland's rhino conservation program.

“If the elephants are not relocated they will be culled,” zoo officials said in September, announcing their plan to import the animals.

In addition to Dallas Zoo, the elephants have gone to Sedgwick County Zoo in Wichita, and Omaha’s Henry Doorly Zoo and Aquarium.

“Some people would rather see these elephants die than live in an accredited zoo. We strongly disagree,” Gregg Hudson, president and chief executive of Dallas Zoo, said in the statement. “We can provide these elephants a safe future while making an enormous impact on rhino conservation in Africa.”

In exchange for the elephants, the zoos are donating $450,000 to Big Game Parks, the private, nonprofit trust that manages wildlife reserves in Swaziland on behalf of the notoriously corrupt King Mswati III.

Animal rights groups have argued the zoos were more interested in restocking their exhibits than conserving the elephants.

Stephen Wells, executive director of the Animal Legal Defense Fund, claimed in a blog post that the zoos "orchestrated a fairly tricky sleight-of-hand" to remove the elephants from their native territory and "plant them in expensive faux-habitat exhibits in the US.”

Meanwhile dozens of conservationists and activists signed a statement that described the display of wild elephants in zoos as “detrimental” to the animals.

“The forcible capture and removal of wild elephants from their home ranges and social groups is archaic and unethical,” the statement said. “Elephants do not thrive in zoos. Most fail to breed, and an astonishing number of zoo-born elephant calves die young.”

The group argued that no serious effort had been made to keep the Swazi elephants in Africa, and said the threat of a cull was being used to justify the import of elephants to the United States.

“A rhino program in Swaziland does not justify the harm caused to the elephants by being captured and exported to zoos," the statement said.

In January the US Fish and Wildlife Service (USFWS) approved the import of the elephants after finding that it met regulatory requirements, including that the import would not be “detrimental to the survival of the species.”

The shipment of the elephants went ahead despite a lawsuit filed by a group called Friends of Animals, which argued that the USFWS should not have granted import permits without first considering the emotional and physical well-being of the elephants.

The animals were sedated and flown in crates on a chartered cargo plane from Swaziland to the United States via a refueling stop in Dakar, Senegal. The crates were then delivered to zoos on flatbed trucks.

Though the elephants have arrived at their new homes, the debate hasn't ended.

On Sunday, a group of protesters demonstrated outside Dallas Zoo, carrying signs calling for a boycott of the facility.

​Dallas Zoo has responded to criticism with a lengthy Q&A that addresses questions such as "Would some people rather see [the elephants] die than in your zoo?"

“The many people and experts who have examined this rescue with an open mind have been overwhelming in their support,” Hudson said Sunday, responding to the latest criticism.

“That’s not the case for activists with an inflexible ideological agenda, who are trying to take advantage of this rescue mission for their own benefit.”