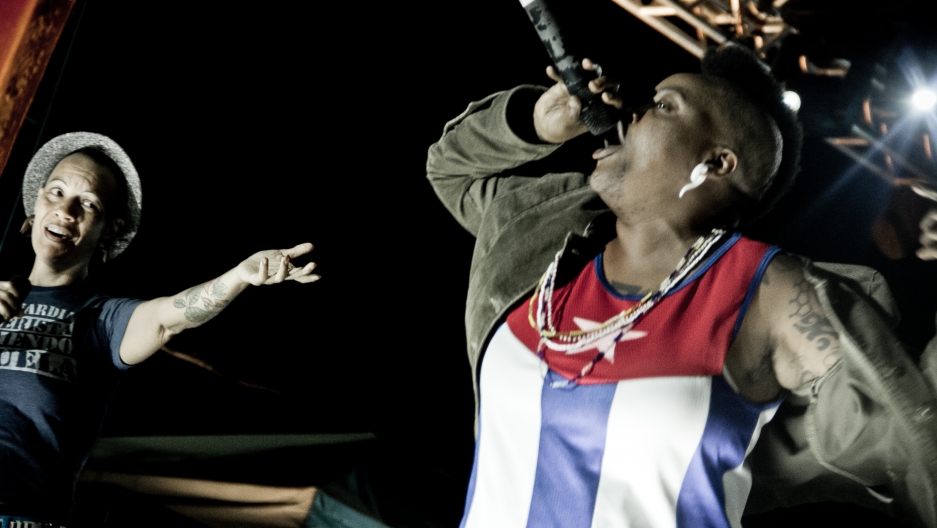 In a traditionally patriarchal society, a radical hip-hop duo is trying to advance queer rights.

Havana-based Olivia Prendes and her partner Odaymara Cuesta make music as Krudas Cubensi. They want to focus the LGBTQIA discourse on black women.

"The voices of queer women are needed," says Prendes. She's an outspoken Afro-Cuban who considers her music a form of activism.

Their songs tout feminist values, denounce Latin America's patriarchal establishment and make a demand to religious lawmakers: "Keep your rosaries out of my ovaries." Las Krudas focus on a message of solidarity and power. They say they're sick of being identified as a hyphenated token group worth pitying.

"The song 'Poderosxs' is important because in it we encourage fans to cross the frontier and come out of the closet," says Prendes. "We invite people to liberate themselves, to respect themselves. We don't want your pity. We're people with a lot of power within our bodies, our lives and we are very valuable."

Cuba is not a traditionally LGBTQIA-friendly nation. In the early days of the revolution, queer Cubans were relegated to correctional labor camps by the government.

In recent years, the regime has apologized for its past treatment of those citizens, passing anti-discrimination laws and offering government-funded gender confirmation sugery to transgender people. Still, marriage equality and widespread cultural acceptance don't exist on the island.

Krudas Cubensi hopes to keep moving that needle, though, by working to increase the visibility of queer Cubans.
"Basically, us women — women who are queer, black, Afro-Latina — need to be at the center of any cultural discussions being had," says Prendes.

Prendes and Cuesta have been involved in Cuba's "artivist" scene since the early '90s.

The two met while they were working as activists in Havana, and quickly fell in love. Before they discovered their talent for hip-hop, Cuesta and Prendes founded the vegan and queer activist art collective Cubensi, and spent much of their time providing Cuba's disenfranchised communities with the tools to create art. Theater, music, cooking — all ways for disillusioned Cubans to express themselves.

In 1998, Cuesta and Prendes attended the legendary Alamar Rap Festival in Habana del Este. There, everything changed.

"We met a lot of like-minded artists and activists, and felt that we could be a part of this community," she says.

And so, in 1999, the unapologetically radical Krudas Cubensi was born.

Over the past 17 years, the duo has witnessed its message of pride and acceptance influence attitudes and perspectives around Cuba. Looking around her community today, Prendes sees a largely progressive culture shift.

"What we've done up until now, it's important," she says. "We've shared what we learned. In our communities there's always a lot of solidarity and respect. It's very beautiful, the energy among ourselves. Cuba is patriarchal, historically. We try to increase our visibility. It's important that Cuba sees us, so that they learn tolerance and respect."

As for the rest of the world? Cuesta and Prendes tour internationally, and consistently find themselves blown away by how strongly fans in other countries relate to their message. And she hopes normalization between the US and Cuba benefits the Cuban people.

"It's been difficult," she says. "The people rarely see the benefits of these political displays — or it takes too long to see any results. The communities that need the most support don't get it. In the future, we hope that changes."