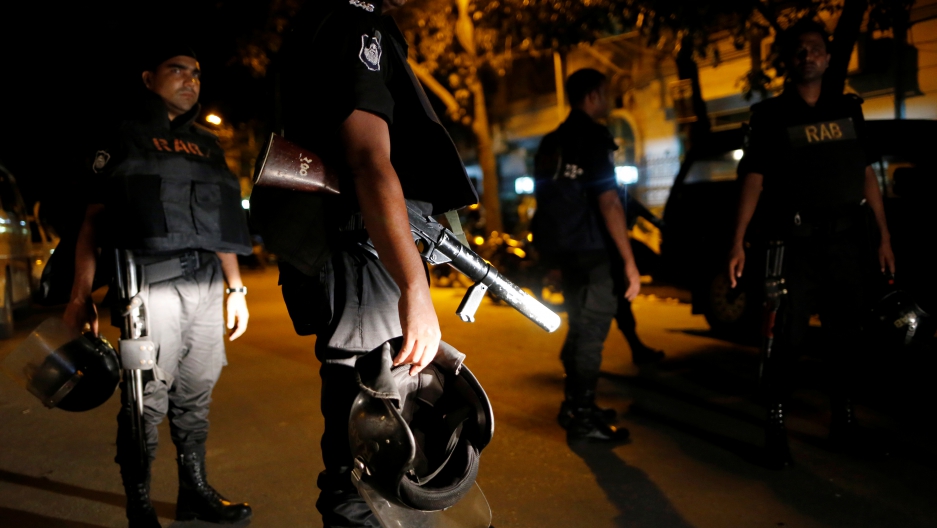 It was a deadly weekend around the world, with significant terrorist attacks in Bangladesh and Iraq, and close on the heels of the attack on Istanbul's airport.

And it's been less than nine months since ISIS-backed terrorists mounted a deadly attack in Paris — and little more than three months since the attack on Brussels airport.

But there have been more than 1,000 terror attacks since the November 13 attacks in Paris. Factor out the ongoing conflicts in Afghanistan, Iraq, Libya and Syria and you still have more than 100 attacks in that time.

Some, like the attack in San Bernardino, California, or at the Pulse nightclub in Orlando were certainly well-reported. An attack in Ivory Coast in March also was widely covered. As was a June attack in Mogadishu.

But other attacks have flown under the radar. Here are some of the most significant terrorist attacks in the past eight months. Attacks in the conflict zones in Iraq, Afghanistan, Syria and Libya are not included, despite being increasingly violent.

A group of al-Qaeda-linked militants took 170 people hostage, ultimately killing 20, during a mass shooting at a Radisson Blu hotel in Bamako, the capital of Mali in West Africa.

Malian commadoes ultimately raided the hotel and freed the hostages, killing the two assailants. Another seven people were wounded.

A bus loaded with Tunisian presidential guards was struck by a suicide bomber linked to the so-called Islamic State.

The lone bomber killed 13 people in what was the third significant attack attributed to ISIS in Tunisia in 2015. 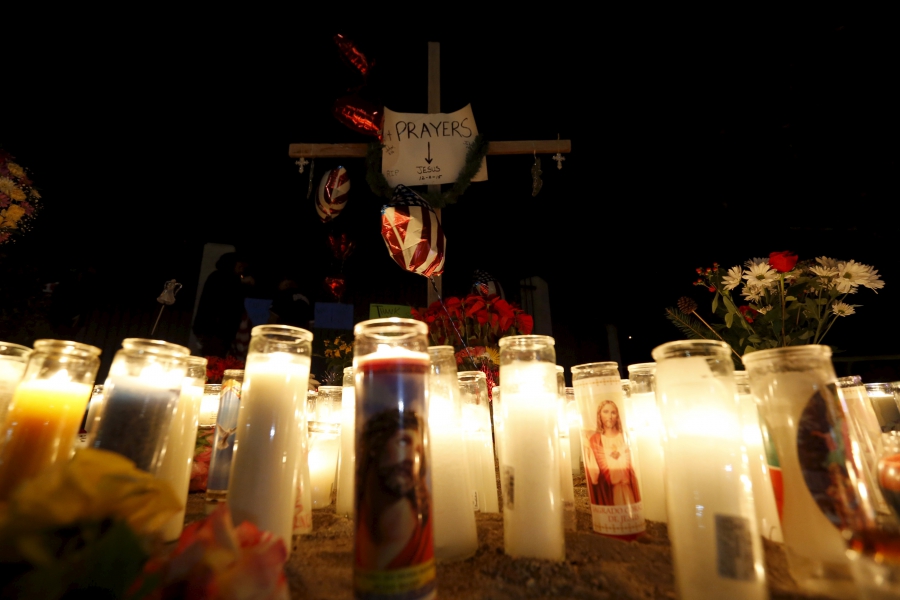 In the most prominent terrorist attack in the US since Paris, two shooters, a husband and wife team, opened fire on the husband's colleagues at the San Bernardino County Department of Public Health.

In the attack, 14 people were killed and another 22 were seriously injured.

A manhunt ensued and the two perpetrators, Syed Rizwan Farook and Tashfeen Malik were killed in a shootout with police. The FBI said the two shooters were "inspired" by ISIS, but conducted the attacks on their own.

A suicide bombing in a popular central square in Istanbul, Turkey's largest city, left 13 people dead and 14 people injured. All of the dead were foreigners.

The perpetrator was identified as Nabil Fadli, an ISIS follower from Syria.

A series of suicide bombings and shootings in Indonesia's capital left eight people dead, including four assailants. Another 24 people were wounded.

ISIS claimed responsibility for the attack, which was conducted by an unknown number of assailants. Though four assailants were killed, as many as 10 others may have been involved. 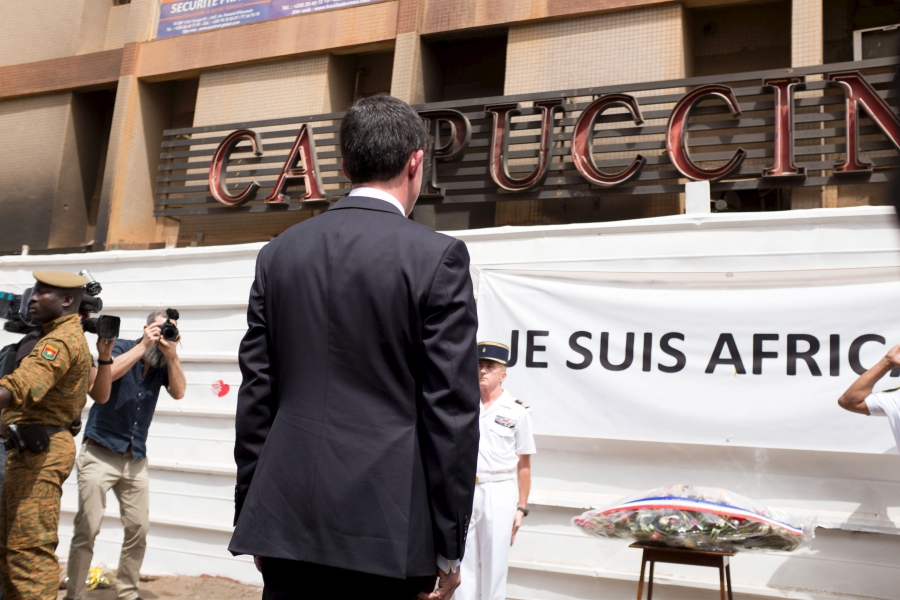 French Prime Minister Manuel Valls stands in front of Cappuccino cafe, the site of an al-Qaeda attack that killed 30 in January in Ouagadougou, Burkina Faso, February 20, 2016.

A group of al-Qaeda backed militants attacked the Splendid Hotel in Ouagadougou, the capital of Burkina Faso. At least 30 people were killed, and another 56 were wounded.

Government forces mounted a raid and freed more than 170 hostages. Four assailants were killed and another two or three escaped.

Kurdish freedom fighters attacked a convoy of buses killing military personnel and civilians during evening rush hour. At least 29 people were killed and another 60 people were injured.

The attack, which was carried out by a car bomb, was targeted at military forces, the Kurdistan Freedom Falcons said. One perpetrator died in the attacks.

A group of militants linked to al-Shabbab killed at least 15 people and left others wounded after a suicide bomber detonated a bomb at the gate of the SYL hotel in Mogadishu.

Four gunmen forced their way past the first security barrier before being killed in a shootout with guards manning the hotel's last security line. More than a dozen people were wounded.

A police cordon is seen while Ivorian police prepare to inspect the area of the hotel Etoile du Sud following an attack by gunmen from al Qaeda's North African branch, in Grand Bassam, Ivory Coast, March 14, 2016.

At least 18 people were killed and another 33 were injured when an al-Qaeda-linked group attacked the Étoile du Sud hotel. Among the deceased were 15 civilians and three special forces soldiers who  were part of the response.

The hotel is popular with ex-pats in Ivory Coast. At least three assailants involved in the attack were killed and another as many as three escaped.

A second attack in Ankara this year saw the deaths of 37 people and another 127 people injured. As with the first attack, the Kurdistan Freedom Falcons claimed responsibility for the assault.

The perpetrator was killed in the attack, which targeted a transportation hub. The Kurdish group said civilians weren't its main target, but more civilian casualties were inevitable.

At least four people were killed by a suicide bomber that has rocked the residents of Istanbul to their core. Another 36 people were wounded by the attack on Istanbul's main shopping street.

About one-third of the injured were foreign tourists. Thus far, no one has claimed responsibility.

An ISIS suicide bombing and attack killed 47 people in the Yemeni port of Mukalla. The attack targeted police cadets, killing at least 41 of them.

Another 60 people were wounded.

At least 16 people were killed and dozens more wounded when Al Shabab attacked the Ambassador Hotel in Mogadishu, Somalia. Armed men stormed the hotel before being repelled by armed guards and security agents.

A second assault in Mogadishu in June had a similar death toll.

Twenty-five people died, 18 of them terrorists, in a series of shootings in Aktobe, Kazakhstan. Seven civilians were killed and another 40-plus were wounded.

The attack was blamed on Islamic radicals, some of whom were believed to have return from fighting for ISIS in Syria.

A lone gunman walked into a nightclub in Orlando popular with the LGBT community where he shot and killed 49 people and wounded another 53 before being killed himself by law enforcement.

The gunman, Omar Mateen, proclaimed his loyalty to ISIS.

A trio of suicide attacks at the heavily guarded Istanbul Ataturk International Airport left 45 people dead and more than 200 people wounded. All three attackers were also killed, either in the blasts or shot by law enforcement.

No one has claimed responsibility for the attack — but it has been blamed on ISIS.

At least 22 people, plus six attackers, were killed after a group linked to ISIS assaulted and took hostages in the diplomatic neighborhood of Gulshan, in Dhaka, Bangaldesh.

Among the dead were 20 civilians and two police officers. One gunman was captured and 13 hostages were rescued.