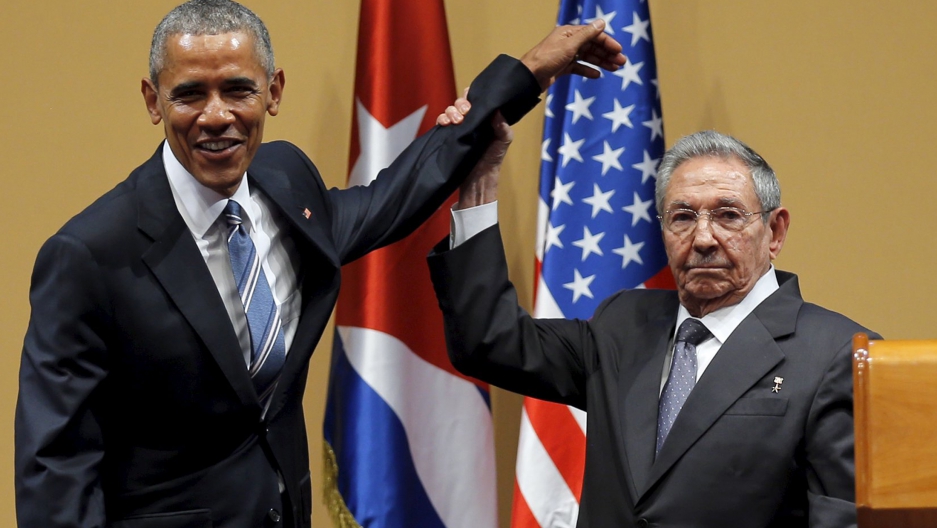 US President Barack Obama and Cuban President Raúl Castro gesture after a news conference as part of Obama's three-day visit to Cuba. In Havana March 21, 2016.

Cuban President Raúl Castro said during a press conference Monday that “there are no political prisoners” in Cuba, contradicting several human rights organizations with lists of names of these prisoners.

The Cuban president said in response to a CNN correspondent that “if there are political prisoners, they’ll be free by nightfall.”

Soon after Castro’s statement Monday, the editorial board of the Miami Herald, the paper of record in the heart of the Cuban exile community, published a bold retort: Want names of Cuba’s political prisoners, Raúl? Here they are!

Juan Vasquez, deputy opinion editor for the Herald, says Castro’s response shows he was rattled by the practice of freedom of the press.

"He’s just not used to dealing with this reality," Vasquez says, "where people come and ask powerful questions."

Vasquez is part of the team that wrote the editorial, outraged at what he calls a "shameless" lie on Castro's part, especially as a journalist in Miami.

And the Internet lit up with names of political prisoners as Castro's claim was broadcast to the world.

The Miami Herald says now that Castro has been sent these names, "we expect him to keep his word." But Monday night has come and gone, and there are no news of prisoners named in cyberspace having been released from Cuban detainment.

Still, Vasquez thinks the mere public exchange — what POLITICO has called a "trap" set for Castro by President Barack Obama — is important for Cuba's progress.

"If there's any value in [Obama's] normalization, it's certainly in having Raúl Castro in his own palace, in his own turf, having to listen to somebody say these things to his face and not be able to shut them down," Vasquez says. "If anybody on the street got up on a soapbox and started saying [there are political prisoners in Cuba], they'd be detained."

President Obama has been criticized by opponents to normalization for engaging with a regime they say is not budging, especially on human rights violations.

But on two public occasions, the press conference and an address Wednesday morning, Obama has directed the Cuban people to look at what democracy means in the United States: that "a child who was raised by a single mom, a child of mixed race who did not have a lot of money" can attain the highest elected office, and that a press corps can question a sitting leader without fear of retribution or imprisonment.

"They don't get to hear things like that very often," Vasquez says. "It's like watering a plant. It may not grow [immediately], it takes a lot of care, but it's a start."