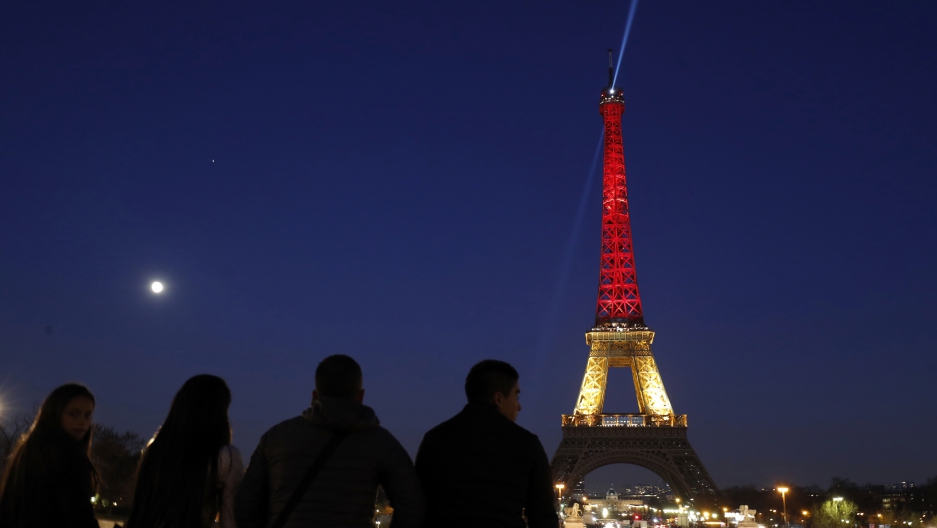 The Eiffel Tower is seen with the black, yellow and red colors of the Belgian flag in tribute to the victims of today's Brussels bomb attacks, in Paris, France, March 22, 2016.

They saw it coming.

After last November’s attacks in Paris were linked to suspects from Brussels, security experts warned that a similar rampage might take place in Belgium.

“What we feared has happened,” said Belgian Prime Minister Charles Michel. “We realize we face a tragic moment. We have to be calm and show solidarity.”

By late-afternoon, more than 30 people were reported dead and more than 200 injured in explosions at Brussels Airport and a metro station near European Union headquarters.

This morning’s attacks came four days after a major suspect in the Paris attacks, Salah Abdelslam, was wounded and apprehended during a police raid in the Molenbeek district of Brussels.

Belgium’s closest allies responded swiftly to Tuesday’s attacks with pledges of unity and expressions of condolence.

“We will do whatever is necessary,” Preisdent Barack Obama said at the opening of his historic speech in Havana, Cuba. “This is yet another reminder that the world must unite. We must be together, regardless of nationality or race or faith in fighting against the scourge of terrorism.” 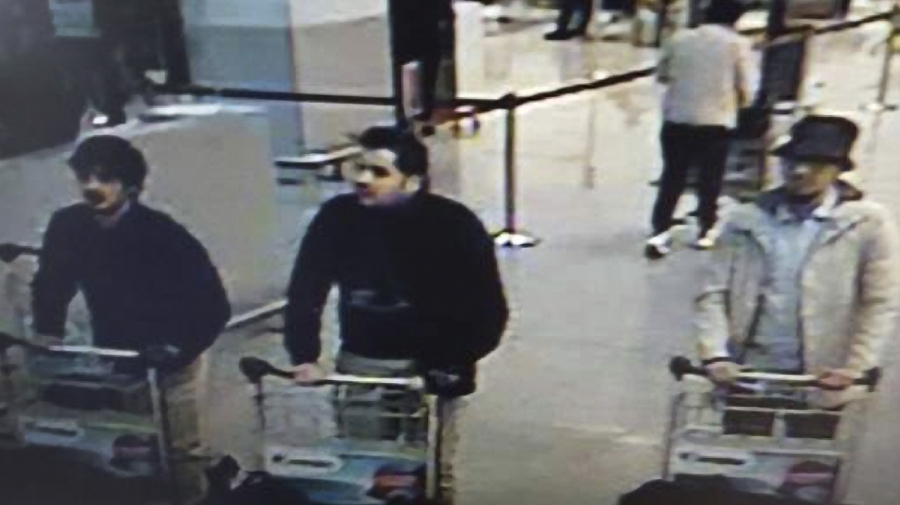 The suspects in the Brussels airport attack.

On Tuesday afternoon, Belgian security officials released an image taken from CCTV footage at the Zaventem airport, said to show three men believed to have carried out the bombing. Federal prosecutor Frederic Van Leeuw said it was too early to say if the latest attacks were linked to the ones in Paris.

But he confirmed that there was a manhunt under way for the suspect shown wearing white in the CCTV footage.

“These were attacks in Belgium. They could just as well be attacks in Britain, or in France, or in Germany, or elsewhere,” said British Prime Minister David Cameron. “We need to stand together against these appalling terrorists and make sure they can never win."

He added that the British government was offering its support to Belgian security, police and intelligence forces.

The Belgian flag is raised in solidarity over Downing Street following the Brussels attacks. pic.twitter.com/yVVZhrX1cX

“We are at war,” said Manual Valls, the French prime minister.

“Terrorists struck Brussels, but it was Europe that was targeted — and all the world that is concerned,” said French President Francois Hollande.

In the longer term, the attacks in Belgium on Tuesday morning raise some difficult questions for the European Union, about its open border policies, about immigration, about policing and intelligence sharing.

Even before the explosions went off in Brussels, security experts had warned that Belgium’s counterterrorism efforts were lacking.

But Belgian parliamentarian George-Louis Bouchez told the BBC today that it would be wrong to blame his country’s security services for what happened.

“There is a lot of Belgium bashing. That is not a reality. We work hard. And it is not easy for my country, because we are in the center of Europe and there is a lot of movement between the different countries. But the police make the maximum for the security,” Bouchez said.

“The only solution is [give up on] democracy, but that is not a choice for us," he added. "So, it’s important to be more vigilant, but it is not possible to stop living and to stop ... democracy.”