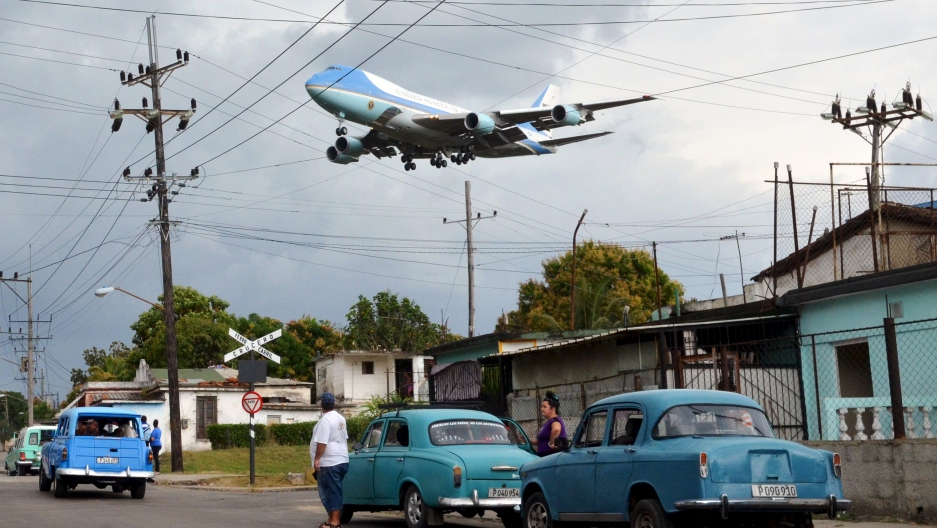 Air Force One carrying US President Barack Obama and his family flies over a neighborhood of Havana as it approaches the runway to land at Havana's international airport, March 20, 2016.

The conventional wisdom would have you think that, among Cuban Americans, politics are clearly divided between generations: Older exiles oppose rekindling relations with the island, and younger people are all for it. But it's not that simple.

Arianna Mendez, a 23-year-old political science student in Miami, born in the US to Cuban exiles, views President Barack Obama's visit to Cuba as "disappointing."

"To a certain extent, I feel betrayed," she says.

Mendez echoes the concerns of hardliners who think Obama should not engage with the Castro regime until it makes concessions on its human rights violations.

"I see this rapprochement as a reward to the Castro regime," she says. "We are a country that claims to support human rights and democracy around the world and here we are, we're going to extend a hand, extend an olive branch to a regime that has made no attempts whatsoever to change their ways."

On the flip side, Uva de Aragón, a 71-year-old Cuban American writer and academic, says her views have evolved since her move to Miami in 1959. She said she would have probably opposed a Cuba visit by former presidents Johnson, Nixon or Ford.

"I spent a lot of time writing letters to the editors," she says. "I was very angry, very anti-Castro, very anti-communist and very active about it."

De Aragón now thinks it's in the US' best interest to rekindle relations with the communist island, especially with President Raúl Castro's announcement that he would retire in 2018.

"There are dangers that could happen in Cuba," she says. "There could be a massive exodus that the United States does not want. There could be drug trafficking. There could be influence of the Soviet Union or China. And I think that as much as [there is] US economic interest in Cuba and in accompanying Cuba in a transition to democracy, I think what really fuels their interests is protecting their own [interests]."

Unlike some of her contemporaries, de Aragón supports the Obama visit.

"I'm very happy he's going, for several reasons. I think the mere image of this young Afro-American president with an aging Raúl Castro is a message of hope for the Cuban people," de Aragón says. "But it's not only that I have changed, it's just that the world has changed."

She says "communism doesn't exist" as it did a half-century ago. The one thing the revolution has done in Cuba, she adds, is to make its people more pro-American, and points to Cubans' entrepreneurial spirit as evidence of that — a hunger for capitalism, for a private sector.

Jorge Duany, director of the Cuban Research Institute at Florida International University, has seen this change himself. He was born in Cuba and left as a child, but visits often for family and work reasons.

"In construction," he says, "all of the sudden I see people throughout Havana neighborhoods rebuilding and painting and remodeling."

Duany credits this private-sector growth to Cuba's increase in tourism: "A lot of people are converting their houses to guest houses or to private restaurants."

And for good reason. "Venezuela provided oil subsidies to Cuba and was a great economic benefactor," Duany says. "After [Hugo] Chavez passed away and those resources were no longer readily available, Cuba felt, [in] desperation, they needed to stimulate the economy someway, somehow. It's not because they believe these changes are good. It's not because they want Cubans to be able to open their small businesses."

Mendez thinks now that Venezuela's economy is struggling, the US should have reinforced its economic sanctions on Cuba: Because the island is suffering the loss of Venezuelan resources, the regime may have conceded ground on human rights or economic reform.

And the opposing view, from de Aragón: "The more opportunities there are for Cubans in the private sector, the more you separate them from the state, the more you empower them."

Meanwhile, Mendez maintains that Cuba is "as communist, as tyrannical as they were in 1959."

Exile politics aside, Duany worries about the 20- and 30-somethings on the island, born several decades after Fidel Castro came to power. He says they are relying on a tourism economy and remittances from relatives in the US.

"All they have experienced is this period of very difficult economic challenges," he says. "In fact, we see a lot of young people looking for a chance to leave the island — to migrate because that's where they think they can chase their dreams."