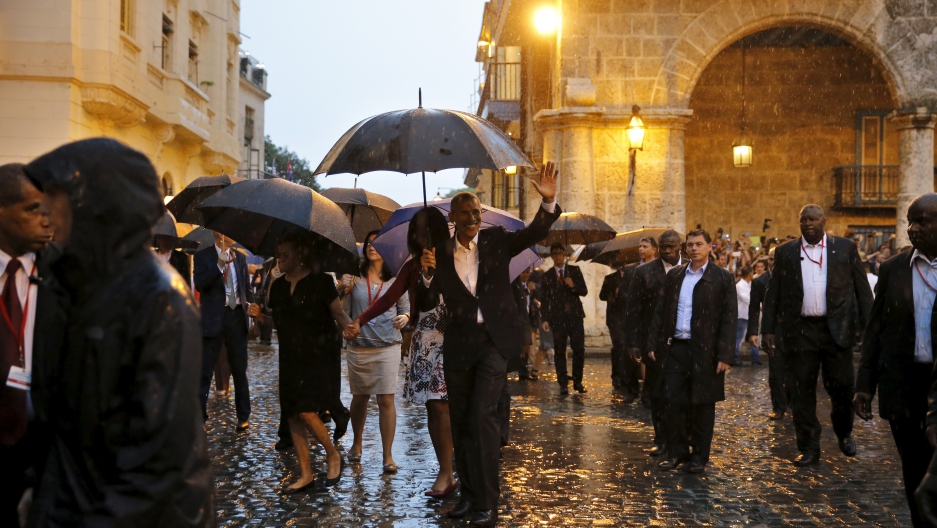 President Barack Obama tours Old Havana with his family at the start of a three-day visit to Cuba, in Havana March 20, 2016.

I put a very basic question to Cuban Americans in Miami: Should President Barack Obama be in Cuba?

“Yes, I think the president going to Cuba serves tremendous interest of the administration and its policies,” says Joe Garcia, a former Democratic congressman from South Florida who is running this year to reclaim his seat.

And a conservative view.

This being Miami, I met both men in cafés.

Let’s start with Garcia. He says the two leaders, Barack Obama and Raúl Castro, present a stark symbolic contrast that the US can use to its advantage.

“Here you have a young American president. He’s vibrant, charismatic, tall, racially looks like the Cuban people, standing next to the successor to the lifetime tenure, or family possession, of the Castros, older, an economy in shambles,” says Garcia.

Claver-Carone sees a much different symbolic moment unfolding. “I understand the debate of whether he [Obama] can go and have a Reagan ‘tear down the wall moment,’ but my argument has always been that Reagan made that argument in West Berlin, not in East Berlin while he was hugging Erich Honecker, who was the dictator of East Germany at the time.”

Claver-Carone adds that Obama’s visit to Cuba is doing a disservice to the Cuban people.

“The president, in an interview that he gave in December of 2015, essentially had made the case that he would not go to Cuba until he saw tangible evidence that human rights had improved on the island. Well, thus far, we saw last year there were 9,000 political arrests. And 2016 has been the most repressive New Year in decades. And yet the president is going,” says Claver-Carone.

Garcia sees something else happening on the island. He had a hand in shaping the Obama administration’s less restrictive approach toward Cuba.

“Today you have a vibrant and growing civil society. This policy is successful. Is it exactly what we want? Is Cuba a thriving — I don’t know — Western European democracy? No, of course not. But certainly it’s better today than it was a decade ago,” says Garcia.

After meeting with the two men, I admit to being confused. Which guy was spinning me? Is Cuba more open than ever, or more oppressive?

“The truth is probably somewhere down the middle,” says Eduardo Gamarra, a professor of Latin American politics at Florida International University.

Gamarra says both the left and the right are exaggerating the good and the bad unfolding in Cuba today. He says the administration’s lifting of restrictions on Cuba is clearly having positive impacts on Cuba’s civil society, but we shouldn’t exaggerate the impact of that on other areas.

“Are human rights violations continuing? Absolutely. Are they likely to continue in the near future? Yes. And the exile community in Miami is right to be critical of that,” says Gamarra. “So the question is: should we continue to engage with them despite these violations?”

Claver-Carone says no. He says the US engaged with Latin American dictatorships in past decades and it didn’t work.

“I think one of the most concerning aspects of this trip is that this is going to be the first US president to visit a Latin American dictatorship since Lyndon Johnson went to visit Anastasio Somoza in Nicaragua,” says Claver-Carone. “There’s a reason why American presidents haven’t done that since. We’ve been in a process of democratization, which has been our geopolitical priority in the Western Hemisphere, and a successful one.”

Claver-Carone would like to see President Obama pay more attention to democratically-elected leaders in the region.

“Probably a hug is much more powerful than a slight,” says Garcia, comparing Obama’s visit to papal trips to Cuba.

Despite the disagreements among Cuban-Americans, it’s worth remembering, those on the left and the right both want the same thing: the end of a repressive regime in Cuba. That much they agree on.